We made it! Huge thanks to everyone who has read, shared and commented on the fourth great geo-advent, and especially to all the authors – it, fairly obviously, would not be possible without you.

There’s now four whole years of geoadvent posts to look back on – so if you’re short on Christmas reading, why not explore the archives? Here are a few personal favourites:

We gave you a Christmas party check list to keep any geological guest happy, including a particularly fabulous Christmas jumper

Policy Officer Flo concluded her 5 days of Christmas with an investigation into whether Alan Partridge’s apple pie really was hotter than the sun (it wasn’t). 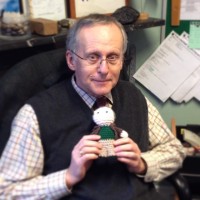 As modelled by the man himself.

Map Librarian Paul recounted the always popular tale of William Buckland – the man who ate everything (including, apparently, the heart of a King…)

Last year’s advent calendar focused on some of the many photographs which were entered earlier in the year for our 100 Great Geosites photography competition – all well worth looking back on! We also featured:

Map Librarian Paul for two forays into the world of geology in popular music, an extremely festive account of the tectonics of the Cold War, and a three part series taking us on a geological journey through history, linked by the first Christmas card.

Archivist Caroline for five fascinating accounts of the exhibitions and events organised by the Society’s library this year.

Education Assistant Amy for a geological history of the Christmas tree, and the surprising news that a lot of trilobites are named after bands, which no one saw coming.

Don’t forget the geoadvent challenge – if anyone spends any time over the Christmas holidays crocheting or otherwise crafting on a geological theme, let us know and we’ll send you a prize!

Finally – I’ve been promising all month – in fact all year – that we’d feature this cartoon on the blog at some point, so here it is, because it’s Christmas. (We’d like to point out that since her lifetime we’ve become a lot more friendly towards Mary Anning, to the point of crocheting her for the geoadvent.)

Apologies for the lack of credit – all efforts were made to find one, but if anyone can enlighten us we’d love to add it in!