In my previous blog on the subject of the geology of the popular song I came up rather disappointed with the results.  Rock had a rather low rock content, despite the name.  This got me thinking. Just how many rocks are in rock music?  Which is the most abundant?  Perhaps there were hidden seams of mineral wealth waiting to be discovered hidden within the less well remembered second verses of songs that we can all hum?

To find out, I had to establish a methodology.  I would need to search the lyrics of songs in a systematic manner to hopefully reveal the full melodic lithology within. I settled on the website www.songmeanings.com which had a good lyrics search function, bringing back band names, song titles and full lyrics searches for any search term you cared to try.  They also had far fewer annoying ads when compared to other lyrics websites as well as the occasionally humorous results of the general public attempting to interpret the meanings of song lyrics.  Their database may not be complete and given intellectual property and publishing restrictions, it may that some of the lyrics on the site are not be searchable.  Nevertheless, this is a problem that would affect all lyrics websites, and the data songmeanings.com have made searchable is a large enough subsample to give relatively accurate results.

With my lyrical source and search functions set, I drew up a long list of words specifically to hunt for the rock content of rock music.  I present my discoveries below.

There are worryingly few songs that mention the three main rock types.  I would have thought metamorphic or igneous would get a few mentions, but I suppose that they’ve all got far too many syllables in them to scan well in a chorus.  There were 6 mentions of ‘metamorphic’ and ‘igneous’ and only 5 of ‘sedimentary’ in the whole of the songmeanings.com database of lyrics.  Pleasingly this does lead to a satisfyingly even three-way split of all music into types.  I will leave as an exercise for the reader to classify songs accordingly.

I was imagining that rock would favour the large boulders and cobbles.  They seem more fitting and possibly ‘louder’ in my imagination.  It turns out though that rock music is largely composed of beaches and deserts.  Sand dominates the Wentworth Scale of music lyrics by some margin, with nearly three-quarters of all mentions of grain-size being sand.  Only mud can come anywhere close to that.  If you were wonder what song features ‘colloid’, it’s as song called ‘Commandante’ by k-os.  With only a cursory reading of the lyrics, I’m not convinced I can offer an accurate precis.

Now this was a surprise.  I was imagining that since the 1970s at least, the occurrence of heavy metal ore in rock would have been at relatively high, possibly toxic levels.  Instead, music has little to fear from heavy metal pollution as the only examples in the whole lexicon of pop are 5 songs featuring cinnabar and 1 with pitchblende in the lyrics.  There are no occurrences of lead ores at all, except that two songs are called ‘Galena’,  one by a group called Balance and Composure, the other by The A-Frames.  Neither mention galena outside the title, but do make use of geological metaphors (earthquakes and mining).  Clearly there are people looking for lead, but so far there have been no successful plays. 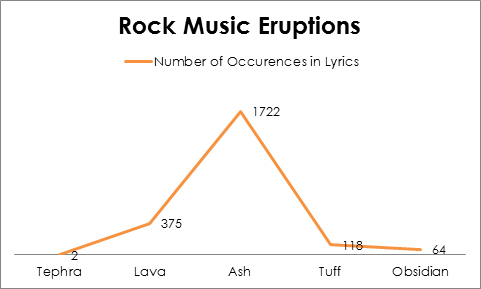 I was also imagining that large mountains that explode might be appealing subject matter for rock lyricists.  They lend themselves to all manner of metaphor and drama.  In this assumption I was, perhaps ironically, on safer ground.  There were a large number of songs that mentioned ash and lava.  The more interesting discovery was that ‘tuff’ occurred in over 100 songs.  For a brief moment I thought I had stumped across a new genre of music that concerned itself with consolidated ash, but then the true reasoning dawned on me.  In a large proportion of these songs, ‘tuff’ is followed by ‘enuff’.

It transpires that gemstones are at least two to three times more common in rock lyrics than industrial minerals.  Even more puzzling is that ‘diamond’ is the most musically abundant gemstone of them all.  In fact the gems traditionally considered precious such as ruby, emerald, sapphire and topaz are all more common than semi-precious stones such as agate, chrysoprase and tourmaline. 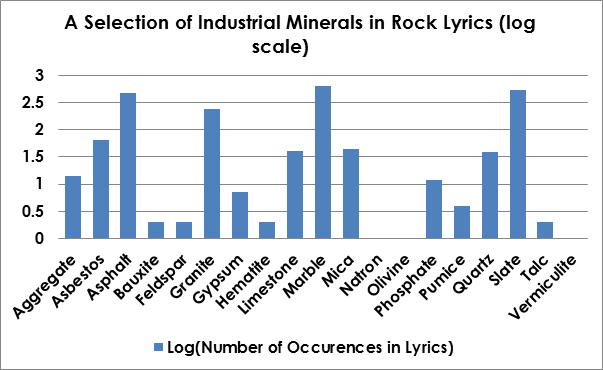 This is clearly an inversion of what is found in nature.    Even more surprising is that many of the more common and useful ores and minerals aren’t mentioned in a single lyric listed on songmeanings.com.  Examples searched for without success included magnetite, halite, fluorspar, kaolin, dimension stone, carbonatite and Fuller’s earth.

As in the fickle world of popular music, there are several rocks that have only made it into a single, solitary lyric.  There are many, many more that haven’t been represented at all.    Some very common mineral groups such as feldspar have very few mentions.  Feldspar in fact only occurs in two songs (thank you Tori Amos).

In rock music, the normal foundations of geology have been shaken dramatically.  Through the eyes of the lyricist, the Earth is a highly volcanically active world consisting mainly of diamond and other gemstones, but with little heavy metal toxicity and poor prospects for mineral exploration.  There is some hope for coal and oil however (data not shown here), and perhaps some investment is needed into the music industry in order to encourage the creation and discovery of new deposits particularly of metal ores.

8 thoughts on “Door 9: The Rock Content of Rock Music”