A few weeks ago, we set you a challenge. With Easter on the way, and a blog post about Silurian Death Assemblage cupcakes proving popular, we gave birth to the Great Geobakeoff. Nearly 100 entries later, what have we learned?

Before we announce the results, here’s a run down of the entrants – sincere apologies if we’ve left anyone out. By the end of this, we couldn’t really move for pictures of cake.

*warning: the following blog post contains multiple images of cakes. If you don’t have any cake near you, you may not wish to continue.

We asked for uninspiring, flat yellowy cakes, and you did not let us down.

Starting off small for the #geobakeoff with a golden Australian Hawkesbury Sandstone Banana Cake. pic.twitter.com/OYxzBAezFP

Some of you went above and beyond, introducing a variety of colours and some interesting stratigraphy… 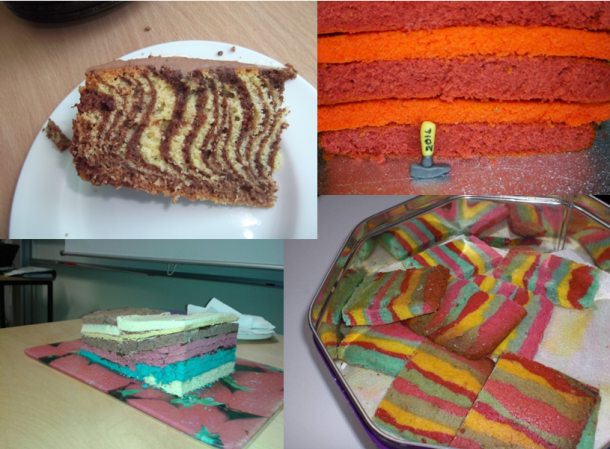 We also received two Grand Canyon entries, which we were slightly confused by, until we realised you were simply taking a more interesting spin on the whole sandstone layer concept, and promptly awarded you both 10 points.

Perhaps unsurprisingly, given our description, we didn’t receive a huge number of graptolite cakes. There was one stand out example:

An impressive number of you took the initiative and exploited our graptolite loophole, courtesy of Flo: ‘if you’re going to make a fossil cake it could at least be interesting.’ So we’ve decided you all get graptolite points too, for creatively interpreting the brief. 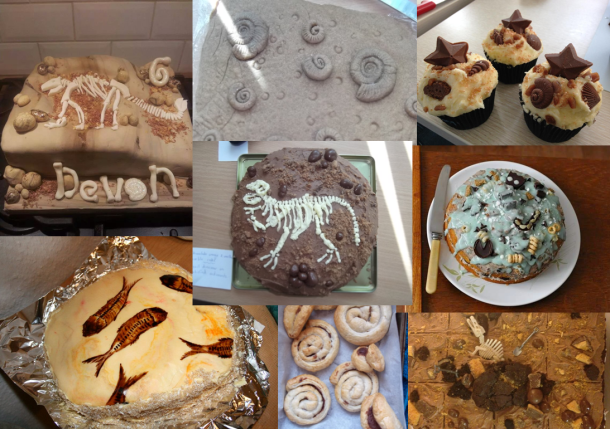 Well done to @longrat, the only person to take on Hutton’s Unconformity. Are those cereal bars? #geobakeoff pic.twitter.com/FXCQ0ZnsSA — Geological Society (@geolsoc) May 9, 2014

Again, a solitary entry for this slightly obscure of bakeoff challenges, but what an entry!* 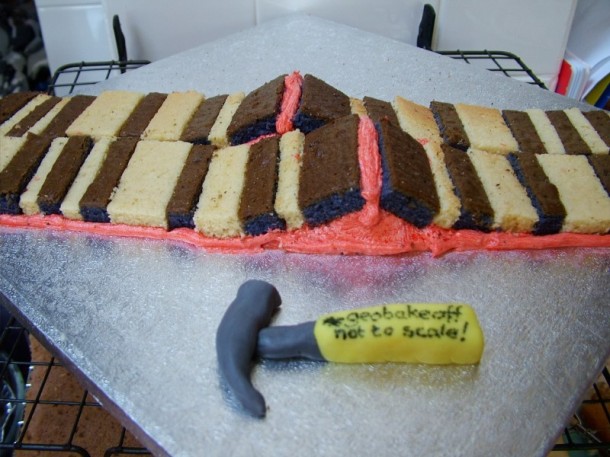 *At this point, you might be noticing a pattern – yes, all the solitary entries so far have come from one entrant, who heroically baked her way through the entire list. * rapturous applause *

Some beautiful recreations of the Great Blue Hole, the example we posted, including creative use of jelly! 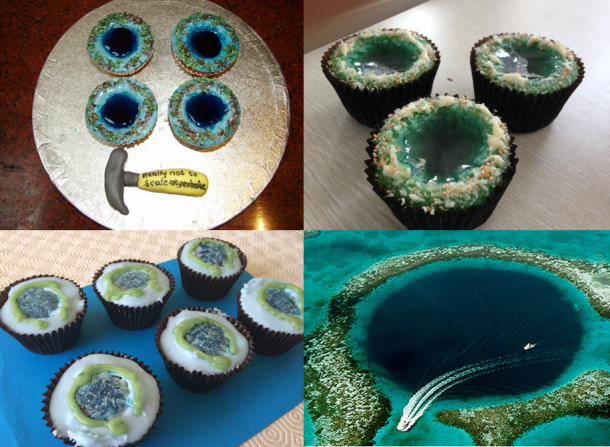 One of these cupcakes is not a cupcake.

Some of you took the motif further…

Particular applause here for the use of monopoly houses, and the callous looking playmobile onlookers. Fabulous.

It’s all getting a bit serious now. Ring of fire was a tricky challenge – we had some volcanoes, some globes, some edible maps, and some subducting sponge layers. You all get 60 points for not copping out and just icing ‘Ring of fire’ onto a sponge. 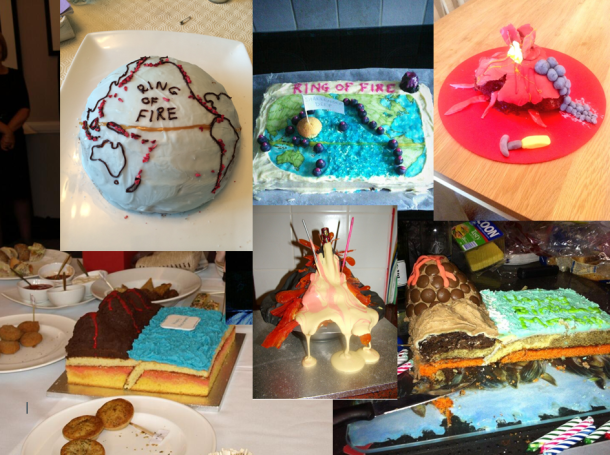 A construction nightmare, but some of you pulled it off!

Without ever forgetting the point of all this, of course…

and, by the same author, even more ingenious biscuit Giant’s Causeway:

Meanwhile, others went down the slightly more traditional cake-based route: 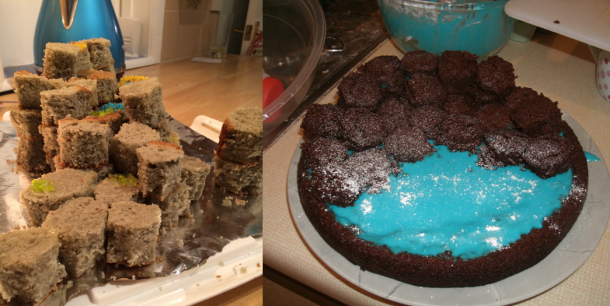 Some truly sterling efforts here, from all around the solar system. Particular standouts – the Marzipan Rover… 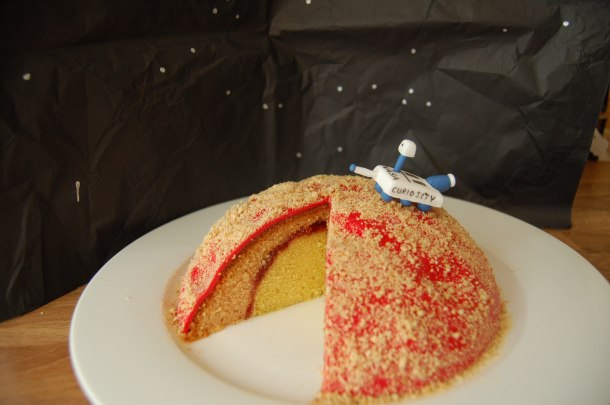 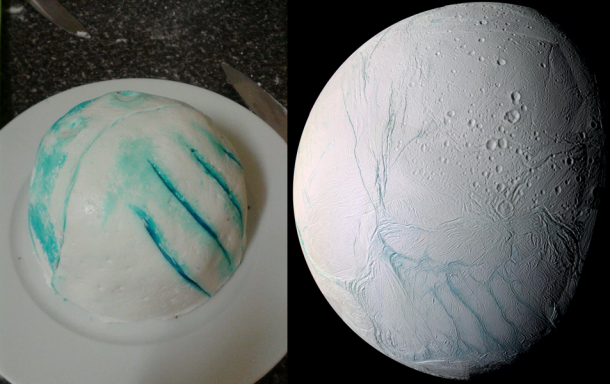 One of these moons of Saturn is not a moon of Saturn.

And a round of applause to the good people at GeoBus, who managed to bake their entire logo along with quite a few entries, including a rather fetching globe cake:

So many amazing globe cakes. High fives and 90 points to you all! 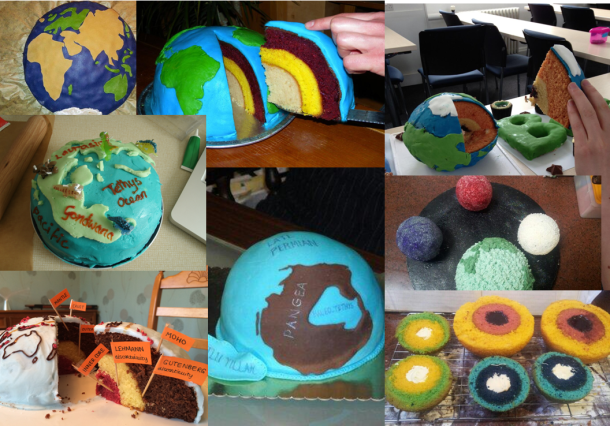 What could we post, we asked ourselves, for 100 points, that would be so ridiculous, so utterly unbakable, that no one but the most committed of geobakers would take it on? The answer was simple. The results were unexpected.

Hatching velocipraptor bakers, we salute you all, for your geobaking prowess,  your vision, and for the fact that there is now a file on the Geological Society’s servers entitled ‘hatching velociraptor cake montage.’ Cue theme tune: 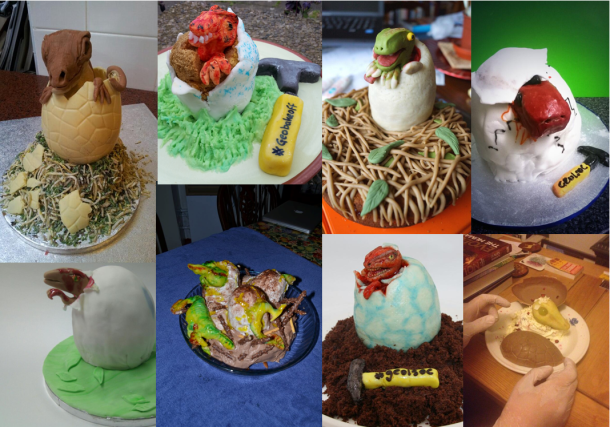 And so to our winners, and to the all important question of who is to become the proud owner of our much coveted rock hammer USB sticks.

130 points and tied sixth place to Catherine Kenny (only fitting, as her blog inspired the geobakeoff phenomenon), Leanne Roden (@leanneroden90) and Dheyna (@dheyna_x) for hatching velociraptors with added USB sticks!

Fifth place with 140 points to Rehemat (@livelovesurf24) for a brilliant Ring of Fire cake and that playmobile sinkhole cake.

Fourth place and 160 points to St Andrews’ GeoBus project (@Geobus_StA), who not only completed three challenges, but baked their entire logo in the process. Bravo!

In third place, with 310 points, Gwenno Talfryn who baked four of the ten challenges…

But the undisputed Queen of the bakeoff, with 580 points, is Liz Laycock (@longrat), who baked every single one!

Congratulations to all our winners, and to everyone who took part! If you haven’t had enough geology cake, all the entries are on our Flickr page for your perusal.. 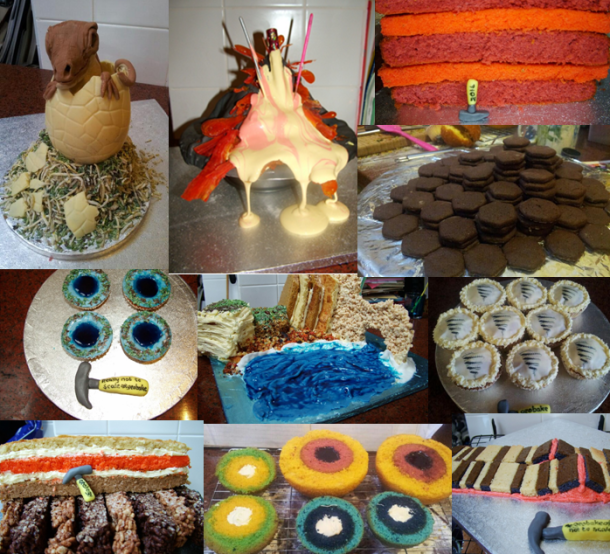 9 thoughts on “The Great Geobakeoff – the results!”