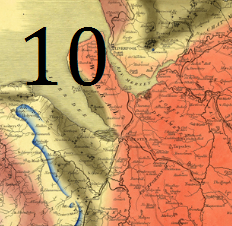 Part 3 of our run-down of exhibitions and events held at the Society this year features our very own meteorite!

The Geological Society Library’s outreach programme is to designed to promote the sheer breadth and scale of our unique collections to the public and Fellows alike. Our popular outreach events held throughout the year are usually inspired by an item or items in our collection which are then brought to life by an invited guest speaker, generally a Fellow of the Society who is an expert in that field. Last summer we took part in one of our more ambitious events to date, involving no less than five different speakers giving concurrent talks in four different rooms around the building.

On the 15 July 2016, all of the Burlington House societies opened their doors to the public for a special ‘Courtyard Lates’ evening of talks, displays and tours. Our contribution was to host a geological salon entitled ‘Maps, Meteorites, Mary Anning & the Missing Link’. Visitors could listen to one of three different lightning talks covering the creation of the first geological maps of Britain, the Jurassic marine reptiles of Mary Anning or the audacious Piltdown fraud. The evening culminated with a longer lecture on the pre-scientific theories of the origins of meteorites.

There were of course a large number of items from the archives and special collections on display but for today’s post we will focus on one of them – glory in the beauty that is the Society’s very own meteorite!

This fragment of a pallasite meteorite was found in a valley west of Imilac, Atacama Desert, Chile, in 1822. It is recorded as being donated to the Society by Woodbine Parish, consul-general to Buenos Aires, as a ‘Specimen of native iron from the province of Atacama in Peru’, 6 June 1829. Below is Parish’s description of the discovery of ‘Atacama iron’ from his book ‘Buenos Ayres and the Provinces of the Rio de la Plata’, 2nd ed (1852)

“The Atacama iron is certainly remarkably similar to that discovered by Pallas in Siberia: like it, it is full of cavities filled with a green crystalline substance resembling the olivine in basaltic rocks….it is found scattered in large quantities over a plain at the foot of a mountain a little to the south-west of a small Indian village called Toconao, ten leagues from San Pedro, the capital of Atacama, and about eighty from Cobija, on the coast. The tradition there is, that the fragments have been thrown out by some volcanic explosion from the side of the neighbouring mountain, in which the people of Toconao say there is a large veta of pure iron.” Buenos Ayres and the Provinces of the Rio de la Plata, 2nd ed (1852), pp294-295.

Underside of the meteorite, showing the olivine ‘cavities’

When Parish was attempting to ship the fragments over to Britain, he found that a number of the masters of merchant vessels whom he had engaged then refused to take charge of them. Apparently word had got round that he was attempting to transport a large lodestone and one man feared that it would draw all the nails out of the ship. Another presumed such a large mass of iron would affect the ship’s compass.

The meteorite is one of the few survivors from the Society’s old Museum. Although the collection was broken up in 1911 (being split between what is now BGS and the NHM), a small number of items were retained.

Thanks
Many thanks to John Henry, Duncan Hawley, Tom Sharpe, David Bate and Paul Henderson.