The Journal of the Geological Society’s series of ‘Review Focus’ articles on fossil Lagerstätten continues with recently discovered fossils from Emu Bay, South Australia, which are casting new light on the early evolution of vision…

The finds, recently reported in the Journal of the Geological Society, provide insights into the ‘Cambrian explosion’ – a period of rapid diversification of multicelilar organisms that began around 542 million years ago.

Over 50 species are recorded from the Emu Bay Shale biota, 70% of which are entirely soft-bodied. The fossils include trilobites, sponges, molluscs and Anomalocaris – large, shrimp like predators also found in the Burgess Shale and Chengjiang deposits.

Similar in age and biota to other Burgess Shale-type assemblages, the EBS fossils are preserved in a different way.

‘Typical Burgess Shale type deposits contain fossils that are preserved as two-dimensional carbon films’ says Professor John Paterson of the University of New England’s Palaeoscience Research Centre, who co-authored the paper. ‘Emu Bay Shale fossils are different in that there are no remnants of carbon film – though this could be explained by the extensively weathered rocks. 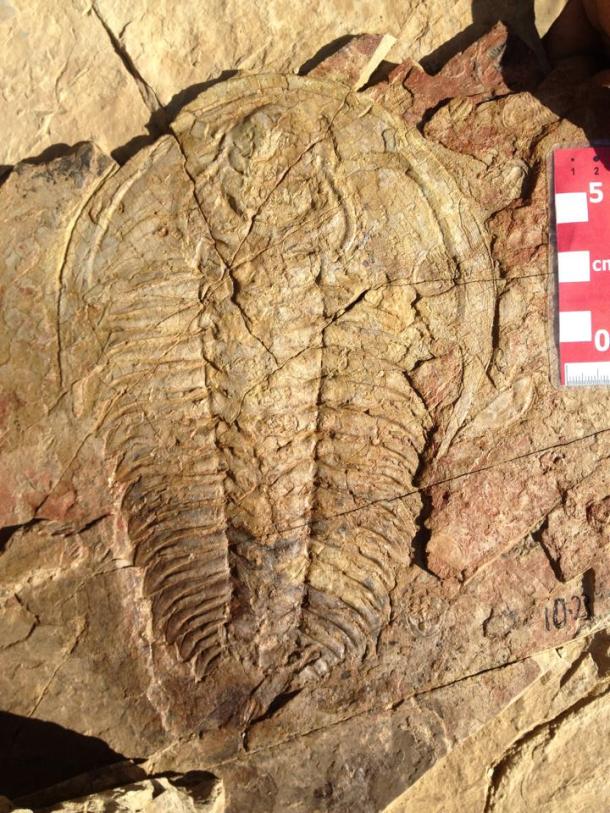 ‘But it is the 3D nature of the specimens that really sets them apart. This requires further investigation, but one explanation might be the slightly coarser-grained sediment, in contrast to the clay-rich sediment of other Burgess Shale type deposits.’

They also differ in the location in which the animals would have lived – very close to shore, in contrast to Burgess Shale type deposits which formed further out to sea.

‘Although it was probably a deep water environment, much of the water column in which many of the animals would have been swimming was well lit’ says Paterson.

‘The seafloor was a much harsher environment due to the low oxygen levels, and only those organisms that could tolerate such conditions, such as worms, sponges and some trilobites, were living on a murky, muddy bottom.’

The fossils include examples of arthropod eyes – some with unusually detailed preservation.

‘The spectacular compound eyes that have been found in the Emu Bay Shale are preserved in such detail because these organs that were originally composed of chitin were replicated by inorganic minerals during the very early stages of the fossilisation process’ says Paterson.

‘In the case of the Anomalocaris eyes, chemical reactions transformed them into pyrite  (or ‘fool’s gold’), which later ‘rusted’ to form iron oxide.

‘These discoveries tell us that powerful vision evolved rapidly during the early Cambrian.’

These chemical reactions, producing minerals that can replicate delicate tissues such as muscle fibre and digestive glands, are part of the reason the fossils show such exceptional levels of preservation. Added to this, the environmental conditions at the time, which helped delay the decay of the organisms. Says Paterson:

‘There is evidence to suggest that many of the species were either swept into or settled down on a part of the seafloor that was very poorly oxygenated. The lack of oxygen slowed the microbial decay of carcasses and most likely inhibited scavengers from disturbing the bodies before and during burial. This explains why many of the soft-bodied animals, such as worms – otherwise rare in the fossil record – are preserved in such exquisite detail.’

There is much more to be discovered from the Emu Bay Shale fossils, which first began to be uncovered in 1954, when large specimens of the trilobite Redlichia were discovered.

‘We would like to know a great deal more about the processes leading to the exceptional preservation of the fossils’ says Paterson, ‘particularly why the soft-bodied fossils have a 3D aspect and commonly show a variety of anatomical structures that have been replicated by different minerals. This combination of features is rather unusual when compared to other Burgess Shale type fossil sites.

‘To better understand this, we will be focusing on the sedimentologic and geochemical evidence from the Emu Bay Shale.’