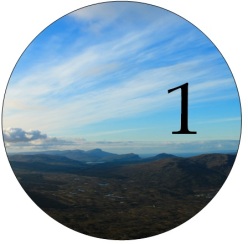 Advent season is here again! This year, as well as the usual mix of festive geological miscellany, the geoadvent team are highlighting some of our favourites of the many entries to our recent photography competition.

We received hundreds of beautiful images of sites from our #100geosites list (the winners of which can be seen in our 2016 geosites calendar, out now!) – including enough images of the Cuillin Hills to make a whole calendar of their own. Since we could only include one in the final calendar, here’s the best of the rest…

Andrew Nisbet visited the Isle of Skye for his dissertation mapping project this summer, and took several images of The Cuillins, including these stunning panoramas.

‘In terms of the geology’ he says, ‘the jagged nature of the Black Cuillin hills form an igneous centre of arcuate basic and ultra basic intrusions, with the smoother red hills being granitic in origin.

‘The area is one I’ve visited a lot during holidays and remains a favourite place to visit.’

Louise Squire, whose photograph of Staffa is one of our winning images, also sent us a photograph of the Cuillins – which, for once, don’t take centre stage…

And Carla Washbourne sent us this atmospheric image of the Red Cuillin half in shadow. Unlike the Black Cuillin, these are lower and less rocky – their name derives from the granite’s reddish tinge, which can apparently be seen in some lights/angles!

We’ll be featuring more of the beautiful photography competition entries we received throughout the advent season – check back daily for more!

One thought on “Door one: A calendar of Cuillins”