The discovery of the first example of fossilised brain tissue from a dinosaur has been confirmed, in a Special Publication published today by the Geological Society in memory of Professor Martin Brasier of the University of Oxford.

‘The chances of preserving brain tissue are incredibly small’ says co-author Dr Alex Liu of the University of Cambridge, ‘so the discovery of this specimen is astonishing.’

The specimen, at first sight an unassuming brown pebble, was found in 2004 by fossil hunter Jamie Hiscocks, near Bexhill in Sussex.

‘I noticed there was something odd about the preservation’ says Hiscocks, ‘and soft tissue preservation did go through my mind. Martin realised its potential significance right at the beginning.’

Research into the specimen was co-ordinated by Brasier and Dr David Norman from the University of Cambridge. With colleagues from the University of Western Australia, researchers used scanning electron microscope (SEM) techniques, which identified strands of collagen and blood vessels, as well as membranes surrounding the brain. There were also signs of brain cortex tissues interwoven with delicate capillaries.

The brain is likely to have belonged to a species related to Iguanodon – a large herbivore from the Early Cretaceous Period, around 133 million years ago. It is thought to have been ‘pickled’ in water high in acidity and low in oxygen, allowing the soft tissues to be mineralised.

‘What we think happened is that this particular dinosaur died in or near a body of water, and its head ended up partially buried in the sediment at the bottom’ says Norman.

‘Since the water had little oxygen and was very acidic, the soft tissues of the brain were likely preserved and cast before the rest of its body was buried in the sediment.’ 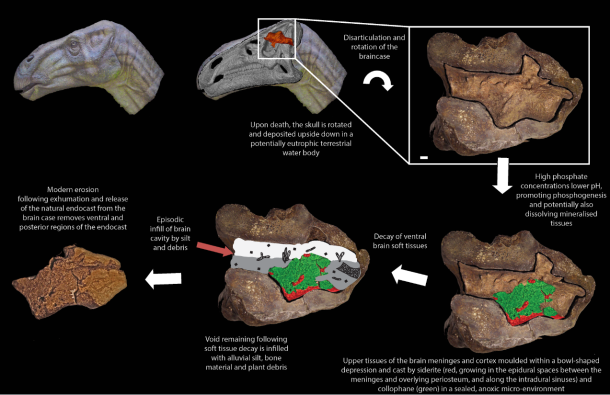 The fossil displays similarities to the brains of modern day crocodiles and birds. Unlike typical reptiles, whose brains take up around half the space within the cranial cavity, the tissue in the fossilised dinosaur brain appears to have been pressed directly against the skull. However, the researchers are reluctant to draw conclusions from this regarding its relative size, suggesting that it is more likely that the brain was pressed against the cavity during decay.

‘As we can’t see the lobes of the brain itself, we can’t say for sure how big this dinosaur’s brain was’ says Norman. ‘Of course, it’s entirely possible that dinosaurs had bigger brains than we give them credit for, but we can’t tell from this specimen alone. What’s truly remarkable is that conditions were just right in order to allow preservation of the brain tissue – hopefully this is the first of many such discoveries.’

Martin Brasier (left) receiving the Lyell Medal in 2014 from then President, David Shilston

‘Earth System Evolution and Early Life: A Celebration of the Work of Martin Brasier’ is published by the Geological Society in July 2017, reflecting the diversity of Brasier’s interests and his rigorous approach to science. The Open Access paper, ‘Remarkable preservation of brain tissues in an Early Cretaceous iguanodontian dinosaur’, is published today (27 October).

In 2014, shortly before his death, he was awarded the Geological Society’s prestigious Lyell Medal in recognition of his contributions to science.

‘Martin has left us with a substantial scientific legacy of over 200 published papers and books’ wrote Owen Green in Brasier’s obituary. ‘On the occasion of his retirement a day of talks in the department was followed by a dinner at St Edmund Hall. The diversity of attendees indicated the wide influence that Martin had across the geological community, and the warmth with which he was regarded.’