A guest post from Science from the Start’s Laura Hobbs..

“Under-fives tend to be an underserved audience for informal science learning, but even the youngest babies are using their senses to learn about the world around them all the time – they’re never too young!

Science from the Start 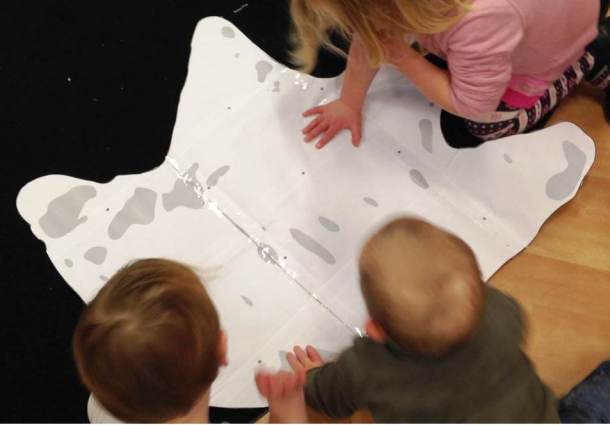 Comparing the size of hands to a life-sized triceratops footprint

Science from the Start provides science-based play learning activities for pre-school aged children. Activities cover a wide range of topics, from sensory experiences to experiments using chemistry and physics, and use  variety of learning methods.

Popular activities include milk swirls (using food colouring, milk and washing up liquid), snow dough (a mixture of cornflour, oil and glitter), sensory bottles (bottles filled with a huge range of materials, which children can use to observe the behaviour objects that they couldn’t safely handle directly), making butter, making ice cream without using a freezer, painting in a bag and fizzy floor paint.

Sessions are quite often linked to wider events, such as science weeks, to give the activities extra context. My background is in Earth Sciences (an MSci in Geology followed by a PhD on interactions between volcanic airfall and glaciers), so a session for Earth Science Week is a given.

In 2014, Science from the Start ran a session at Carnforth Library, Lancashire, called ‘Fossil Hunting for the Under Fives’ (although we were in fact joined by children aged up to 7 from a local school). The fossil theme meant we could also link to Biology Week, which overlapped with Earth Science Week last year. 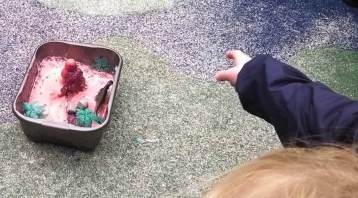 A dinosaur falling victim to vinegar and bicarbonate of soda volcano

The older children went on an outdoor dinosaur hunt, searching for model dinosaurs using an ID and information sheet and working out which one was missing. They finished off their visit with a ‘volcanic eruption’ (a bicarbonate of soda and vinegar reaction over a play dough landscape) which knocked over some dinosaurs and trees, and a quick talk about volcanic hazards.

Inside, the pre-schoolers and their families were busy playing with fossil sensory bottles, learning about common fossils, hunting for shells in limestone-coloured snow dough and finding out about how one day, these could become fossils. This was tied into talking about looking for shells at the beach, as we were in a coastal area.

We painted dinosaurs by shaking the shapes and paint in freezer bags, and the children made their own fossil prints in fizzy play dough (containing bicarbonate of soda) and then watched them dissolve when sprayed with vinegar. This was linked to a discussion of the influence of geology on fossil preservation and the effects of acid rain with the adults.

We read the book ‘Digging for Dinosaurs’, which describes the process of finding, excavating, transporting and cleaning fossils, alongside photographs of real-life palaeontologists doing the same things and some pictures of real fossils (kindly supplied by Dr Matthew Pound of Northumbria University and Sarah Hobbs, University of Bristol.) Finally, the under-fives also ended by watching a ‘volcanic eruption.’

We revisited this theme for Lancashire Day in November because Richard Owen, who coined the term ‘dinosaur’ and brought about the Natural History Museum, was born in Lancaster. This time, the children hatched model dinosaurs from play dough eggs, played with the dinosaurs and compared the size of their own hands and feet with a life-sized cut-out of a triceratops footprint. 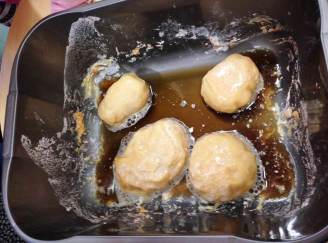 Next, we’re running a session on volcanoes at a local library for British Science Week in March. There are plenty of activities we could do – building, naming and erupting volcanoes, making volcano baby mobiles, matching volcano pictures and experimenting with flows and surfaces are all possibilities…”

2 thoughts on “Pre-School Palaeontology: Science Learning for the Under Fives”