Over a year ago the Geological Society put out a call for ‘the best geological poems, original or otherwise’ to be read at an event this October 10th to mark National Poetry Day and Earth Science Week.  It has been my privilege to read the submitted poems and a delight to see the variety of material that has been regularly popping into my inbox.

One pleasure was to be pointed towards poems (and poets) with which I was not familiar. Poems such as the remarkable  ‘In a Marble Quarry’ by James L. Dickey and ‘Geologist’ by W. Hart-Smith, or ‘Amber’, a beautiful poem by the Irish poet Eavan Boland, which serves as a reminder that the best poetry can stem from simple reflection on the smallest of objects.

But it has also been wonderful to read the new poems written by Geological Society members and others, poems which address everything from fondly remembered field seasons in Zambia, to the last journey of Captain Scott, or the warmth of a lover’s arms after a day drilling boreholes in the January cold. Not to forget a touching memorial to an old friend set to the music of Gilbert and Sullivan!

There is nothing new in geologists writing poetry.  In the Library’s Rare Books collection, self-penned poems are abundant: as prefaces, as musings from the field, as dedications, or, in the case of Bakewell and Scafe’s A geological primer in verse (1820) and J.S. Watson’s Geology. A Poem in Seven Books (1844) , as epic geological histories of the world laid out in rhyming couplets. Meanwhile, our Assistant Librarian Wendy Cawthorne has been unearthing poems in books and journals published right up to the present day, sometimes in the least likely of places. Who would have thought, for example, that a poem riffing on Bob Dylan would lurk in the seriously scientific Journal of Metamorphic Geology (Vol. 26 (2008): 123)?

What are the reasons for these strong links between geology and poetry? Is there something more to it than the connections between poetry and landscape, or the fact that geologists are, more than other scientists, revellers in the wide expanses of the great outdoors? And while we’re at it, do physicists and chemists and biologists write quite as much poetry as geologists? 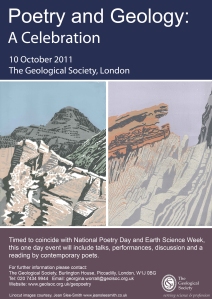 These questions and others will perhaps be answered on October 10th, when we will enjoy talks on Milton, Tennyson, Thomas Hardy, Robert Burns, Norman Nicholson, Wallace Stevens, climate change, the stone sculptures of Alyson Hallett and how rock climbing in the Lake District inspires the poetry of Helen Mort. But mostly we will gather to listen to and celebrate these geological poems in all their variety, humour and beauty. I hope to see you there.

For more information about this event visit www.geolsoc.org.uk/geopoetry

2 thoughts on “Between a rock and a Bard: geology and poetry”