Massive Online Open Courses are clearly the political flavour of the month – but should  geoscientists get involved?

The brainchild of two Artificial Intelligence academics at Stanford, who responded to massive demand for their courses by uploading them open access to the web, ‘MOOCs’ have been variously hailed as a revolution in Higher Education, a game changer, a market disruptor and a load of fuss over nothing.

There’s no denying their popularity. When news of Stanford’s online ‘Introduction to AI’ course went viral, in excess of 150,000 students signed up for a course delivered via podcasts, peer support groups and online assignments.

Inspired by this success, a number of ventures have been established in the US, notably Udacity, edX and Coursera. They feature a wide range of MOOCs from premier Universities – indeed, it is almost impossible to be a ‘Premier University’ these days unless you have a presence on one of these MOOC sites. 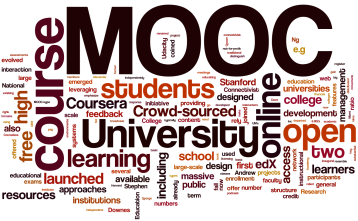 The amount of study can vary from a couple of hours per week over seven weeks for an Introduction to Philosophy, to a twelve week module with an estimated workload of 16-20 hours per week. The latter, a course on Medical Neuroscience, is replete with a reading list, video tutorials with a leading academic and educator, interactive quizzes and other assessment material, including two exams.

These two modules, which in some ways reflect the present extremes of the MOOC spectrum, illustrate the diversity of free open access educational resource that is now available on the web. They potentially serve a range of educational needs. In the examples above, the first is aimed at the ‘edutainment’ or life-long learning market, while the second is clearly more focussed and aimed at those wishing to develop Health Science specialisms.

MOOCS and the OU?

So far, the MOOC phenomenon has made little reference to the Open University. This seems strange, given that the OU has been making a success of open, supported, distance higher education for over 40 years, our prominent presence on iTunesU and the global nature of the OU’s platform ‘OpenLearn’.

I don’t wish this to sound like sour grapes, but it serves to demonstrate how educational practices in one country are almost unknown in another.  A somewhat more conspiracy-based idea is that the venture capitalists behind MOOCs wish to write supported distance learning out of history, thereby maintaining the myth that MOOCs are new.

MOOCs in the UK

The US-dominated MOOC scene has welcomed some contributions from UK universities – The Introduction to Philosophy course above is delivered by the University of Edinburgh, for example.

But there has been no active UK or European platform – until now that is.

Announced early this year, Future Learn is a consortium of Leading UK universities,  led by The Open University, set up to deliver MOOCs with a distinctive style. As you will be able to judge from the website, that style has yet to be defined in detail but the list of partners is impressive and the promise of student engagement  and the development of international learning communities is exciting. The web site colours have a distinct similarity to the London 2012 brand, so if Future Learn can emulate just a fraction of the success of last summer, then it may open a new era in distance learning for large numbers of students world wide.

MOOC and the geosciences?

At the moment, Earth Sciences does not have a high MOOC profile. On the MOOC list, Earth is grouped with Energy. This means that Don Dingwall’s ‘Volcanic eruptions: A material science’, sits alongside an introduction to sustainability, ocean solutions and exploring quantum physics; a mixed curriculum bag if ever there was one.

With practicals and field trips so integral to Earth science courses, presenting the topic to a mass online audience is a challenge. The OU has been doing so for a number of years as part of Open Learn, which provides free educational resources at a variety of levels, for free. Take a look at the Open Learn resources associated with the Frozen Planet to see how contemporary Earth system science can be presented in an accessible and engaging way to a mass audience.

Is there a place for the geosciences amongst a growing range of MOOCs? What form would they take? It will be fascinating to see how we respond to the challenge.

4 thoughts on “MOOCs – what are they and why should we bother?”