Visitors to the Library of the Geological Society often ask about our stunning chandeliers, but up until now we’ve not been able to tell them much.  It depends on who you ask – rumour has it that they are made from Pilkington Glass, while others state that in fact they were gifts from the Pilkington Glass company.  What is certain, however, is that they were installed at some point during the major refurbishment of the apartments which took place between 1969-1974. 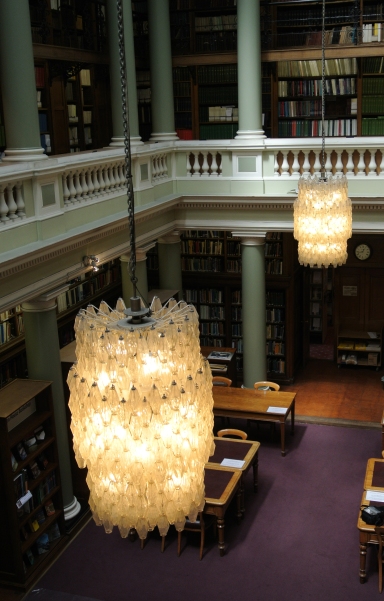 This refurbishment occurred principally due to the reorganisation of the space in Burlington House when the Royal Society moved to its own premises in Carlton Terrace in 1967.  The Societies which were still here shifted around or acquired some extra rooms.  We, for instance, gained the old Meeting Room of the Society of Chemists.  This room was split in two to become what are now the Lyell and the Map Rooms.

The Society’s Council Room is currently being renovated this summer and, coincidentally, I happened to be sorting out the old records from the 1969-1974 refurbishment.  Was there anything in the archives which would finally shed some light on the origins of these chandeliers?

The answer, of course, is yes.  The chandeliers were not gifts at all, but purchased by the Society in October 1971.  The two chandeliers in the Library cost £300 each and the smaller one in the Fellows Room cost £200 (in today’s money this would work out in the region of £15,000 in total).  Neither are they the work of the British craftsmen at Pilkington Glass, but made by the notable Italian firm of Venini.

The Venini company was established in 1921 in Murano, the centre of glassmaking in Venice, as a partnership between the Venetian antiques dealer Giacomo Cappelin and the Milanese lawyer Paolo Venini, whose family had a long history of working in glass.  By the mid 20th century the firm had established itself as a leader in modernist design, their master glassblowers collaborating with different artists to create the best in art glass – from tableware right through to large architectural sculptures. 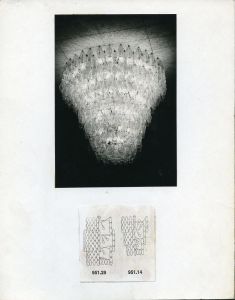 Example design sent to the Society, 1971

The polyhedral glass forms (produced by hand blowing glass into moulds) which make up our chandeliers, were designed by the architect Carlo Scarpa (1906-1978) and exhibited in 1961 at the Expo Italia in Milan.  Scarpa produced a range of light designs using these faceted shapes for the company, for whom he had previously been artistic director between 1932-1947. 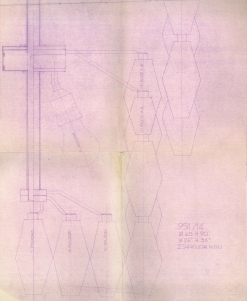 Instructions for installing the chandeliers

The Society was sent a photograph of a typical Scarpa chandelier with a diagram of two designs in September 1971, but they were still unsure about the purchase – possibly as the total cost was £50 over the entire electrical budget.  Three of the Officers made a visit to the (now no longer there) Royal Bank of Scotland branch in Regents Street to see one in situ and were even treated to a mock up of the larger model in the Library before they made the decision to purchase.  The detail of the plan of the smaller chandelier in the Fellows Room (in Italian) shows exactly how the pieces were to be fitted together as well as the placement of the lamps.

So how did the ‘Pilkington Glass’ attribution come about?  At best guess it is likely to be a corruption of the name ‘Pinckheards’.  Pinckheard and Partners was the firm of architects who oversaw the 1969-1974 refurbishment and through whom the chandeliers were ordered.