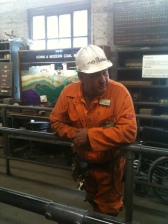 Our guide at the National Coal Mining Museum

Last week’s tragic events in the Swansea Valley serve as a stark reminder of the dangers of looking underground for our fuel sources. It came on a day when we joined the Archaeology and Anthropology section at the British Science Festival for a field trip to the National Coal Mining Museum in Bradford. We spoke with men who have worked in mines for most of their lives, and seen more than their fair share of tragedy along the way.

It’s easy to think of mining disasters as things of the past. While, thankfully, they are rare events in Britain, in other parts of the world they are far too common. Factor in the environmental effects of burning coal as fuel, and perhaps nuclear doesn’t seem so bad.

The day before our Festival trip to the Coal Mining Museum, physicist and TV presenter Jim Al-Khalili spoke to the Festival about his views on nuclear power, which are unashamedly positive.

‘There are tragedies, and I don’t want to belittle those’ he told his audience. ‘But the fact remains that nuclear power has a much lower death rate than coal’. Some estimates put the number of deaths per terawatt for nuclear at 0.04, with coal at 160.

Joining Jim Alhalili in the discussion was Professor Robert Cywinski, otherwise known as ‘Thorium Bob’. He argues for the use of thorium, rather than uranium, in nuclear power, since it doesn’t produce the nasty by-product, plutonium.

With the memory of the Fukishima disaster still fresh, and the 25th anniversary of Chernobyl this year, the resuts of a recent study commissioned by the British Science Association are surprising. They suggest that 37% of the UK population are in favour of nuclear power as a source of UK energy, with a surprisingly low 11% believing we should avoid nuclear altogether.

Meanwhile, we continue to be heavily reliant on coal, and as long as that continues, we will continue to send workers into mines. Like it or not, it is an important part of our industrial heritage, as a visit to the National Coal Mining Museum so clearly shows.

Is it now time to wean ourselves from coal? If so, surely nuclear has to be at least part of the alternative?

One thought on “To mine or not to mine?”

If you’re looking for a new job or a first job in the profession, being a member of the Geological Society can help set you apart from the crowd.
In less than a week, Glasgow will host the 26th United Nations Climate Change Conference of the Parties (COP26) with the aim of accelerating global action towards the Paris Agreement and the UN Framework Convention on Climate Change.
Join us on 4th November for our virtual careers Q&A for students interested in careers in geoscience and engineering on Mars!
As a member of the Geological Society, you are able to access one of the world’s largest collections of books, maps and serials as well as receiving free online access to journals and books.
#EarthScienceWeek21 may be over, but we have plenty more tips and tricks from our outreach superstars to share with you. Want to get involved and share your passion for outreach with the world? Contact us at outreach@geolsoc.org.uk to find out how you can be part of this series 💻
Learn to 'Geologize it!' with Dr Haydon Mort, Earth scientist, geocommunicator and CEO of the Instagram and YouTube channel Geologize.