Advent calendar / Miscellaneous / Out in the field / Science communication

Reader, we went there. If it helps, I think that’s the worst pun you’ll experience during the geoadvent season.

Puddingstone is a favourite rock of ours, and particularly of our former President, Dr Bryan Lovell. It’s even the subject of a meeting in the calender for next year. 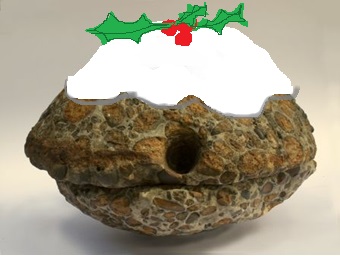 Puddingstone is a conglomerate sedimentary rock, made up of rounded flint pebbles cemented together in a silica quartz matrix. It gets its name from a resemblance to Christmas pudding, so this isn’t an entirely contrived attempt to link Christmas and geology (in case you were wondering).

It also has a story to tell about climate change. Here’s Bryan, strolling the fields of Hertfordshire, to explain:

And if that’s a bit too serious, here’s his mate Mike Excell conveying the same message in song format.