‘You see but you do not observe’

A team of scientists from the Geological Society’s Forensic Geoscience Group enthralled an audience at the British Science Festival yesterday, as they took them through some of the techniques they use to help police solve crimes, persue criminals and recover buried objects.

While they may be applying it in an unusual context, geology is still central to their work. ‘We haven’t invented anything new’ explains FGG Chair, Dr Laurance Donnelly. ‘The techniques we use are used around the world in mining or mineral exploration. We’re just applying them to a forensic context.’

It makes sense to involve people with expert knowledge of the ground and its processes in the investigation of crime. Dr Donnelly’s own specialism is in search – helping the police to recover bodies or objects using a variety of techniques. Changes in soil composition, leaching of fluids into the soil, even thermal imagining can all lead to discoveries of objects long buried.

On the microscopic scale, Dr Lorna Dawson of the James Hutton Institute described how she uses the complexity of soil particles to assist police.

‘Soil is not just ‘mud’ she explains. ‘It is a complex mix of organic and inorganic materials, easily transferable to objects or persons such as on shoes, car tyres or spades. Soil forensic scientists use a range of techniques, including chemical analysis and mineralogy along with new approaches such as DNA sampling to analyse soil samples collected as part of criminal investigations.’

Following further talks from Dr Duncan Pirrie, Dr Jennifer McKinley and Dr Alastair Ruffell, the audience were invited to participate in the investigation of a genuine crime, using the evidence forensic geologists had available to them. Young people as well as adults were rapt by the mystery, and continued their questions long after the scheduled end of the session.

‘It’s not surprising people are so fascinated by forensic geology’ says Dr Donnelly. ‘These are two topics – geology and forensics – which have always been popular with the public. It’s great to see youngsters here getting involved with the applications of science.’ 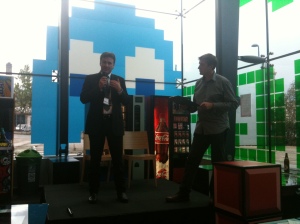 Laurance Donnelly with the BBC's Richard Hollingham at the Xchange

Dr Donnelly later entertained the XChange audience – an evening event featuring the best of the day’s speakers and topics – and was met with the most frequently asked question of the day: ‘How do you get to be a forensic geologist?’ The answer: ‘study geology, and see where it takes you.’

We offer unrivalled networking opportunities for those working in or studying geoscience. With over 12,000 like-minded members, why not join today and see where the journey takes you?
The Geological Society is made up of over 12,000 geologists from over 80 countries worldwide. Shared views, differing opinions, debate, discussion and dialogue. Join now and get involved in shaping the future of Earth science
This large lithographic plate, which we have digitally stitched together, is from ‘The Mastodon giganteus of North America’ by J.C. Warren (1852). The other images show the title page of the book and a plate with examples of complete Mastodon skeletons which had been found.
If you are feeling that the Geological Society isn’t for you, maybe think again. If you study, work or are interested in any of the elements of Earth science, then we have something to offer you. Come and take a look.
Check out our brand new #YearOfSpace posters!
A paper published this week reports on 18 new Theropod and Sauropod footprints in the Bemaraha Formation, Madagascar, forming an important record from the Middle Jurassic strata.