The Neolithic Callanish Stones on the Isle of Lewis have featured a few times in our photography competitions, and always look stunning. Their first appearance was in this winning entry from Brent Bouwsema in 2015: 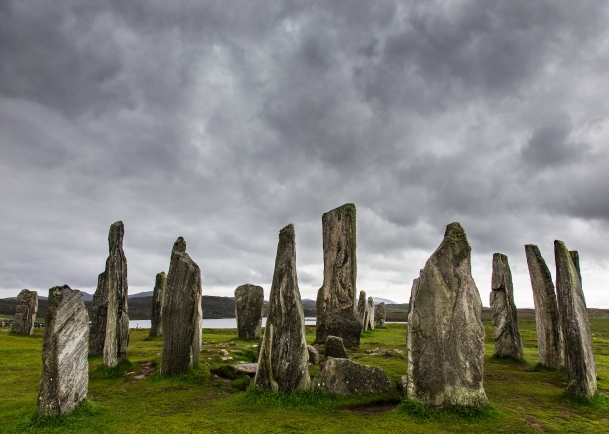 The following description is taken from a post on The Earth Story that can be found here.

The Neolithic stone circle of Callanish on the Isle of Lewis in the Outer Hebrides off Scotland was hewn from the UK’s oldest rocks, the Lewissian Gneiss.

These high grade metamorphics are rocks with a history that starts some 3 billion years ago during the Archaean period (3.5 to 2.5 billion years) and has seen them repeatedly squished and baked until the light and dark minerals that the original rocks were transformed into have separated out due to the immense tectonic pressures as continents collided and separated during these long aeons.

Consisting of a central circle of 13 monoliths with a surrounding cross shape of 5 rows of outer stones overlooking the great western Ocean, they were built some 5,000 years ago as part of a wider ritual landscape (like Stonehenge) and remained a ritual centre throughout the Bronze age over a span of some 3,000 years.

The stones were posited to show alignments to the movements of the moon, though critics have suggested that these are due to chance, and they are less certain than those at Stonehenge. The ancient traditions link them to petrified giants who refused to convert to Christianity, though the Shining One is reputed to walk its avenues every midsummer morning, summoned by the distinctive cry of the cuckoo.

The rocks themselves contain large black eye shaped crystals of hornblende known as porphyroblasts (large crystals that grow and are often rolled into eye shapes during high temperature and pressure metamorphic events) whose selection may have had a religious significance. The only place nearby where such rocks are found is just by the site.

These are some of the oldest rocks in the Lewisian complex and have been caught up in several mountain building events, including the Variscan and Caledonian orogenies, when the first version of the Atlantic closed and the supercontinent Pangaea formed.

The original rocks were volcanic, consisting of a mix of basaltic and granitic composition magmas very common during the Archaean called TTG (tonalite, trondjeimite and garnodiorite). A set of dykes, vertical intrusions of magma, separates mountain building events, cutting the structures produced by the first and being folded during the second.”