A guest post from Stuart Blake, Director of the Lochranza Centre

The Centre in Lochranza has been in existence since 1980, when Dr Hugh Mckerrell and his wife Christine purchased what was then an old abandoned primary school. Hugh and Christine sold the Centre to PGL in 1990, when it continued to be a venue for field studies, but also diversified into activities and family holidays.

2015 brought the announcement that PGL no longer wished to operate from these premises, and the prospect that such a lovely and inspirational location would be lost to fieldwork. The current Directors, Stuart Blake and Chris Traill, who together have over 55 years at the Centre, tried to gain financial backing to be able to purchase and run the site.

The loss of the centre would have potentially lost local jobs and more so lost an amazing facility, where people can come and stay and see the wonders of the fauna/flora and landscape of this beautiful island first hand. Thanks to the help and support of some small investors, Triodos Bank and the local Community, on October 20th 2015, the Centre launched as a not for profit, Community Interest Company. I am pleased to report that we survived our first year, and as of 16th March 2017 received the honour from the Scottish Rural awards – held at Dynamic Earth, no less – of being Highly Commended for one of the best start up businesses.

Being a geologist, I am perhaps slightly biased in saying that all of the island’s amazing landscape, flora and fauna would not have come into existence without the tremendous variety of rocks that abound on Arran. From Cambrian through to Tertiary we have a selection of most, and provided you have a good pair of walking boots most are easily accessible, located along the coast. I believe Hutton was in his later years when he came to Arran and discovered the famous unconformity. So geologists young and old can enjoy the scenic splendour, and marvel and imagine the processes that formed the local landscape. 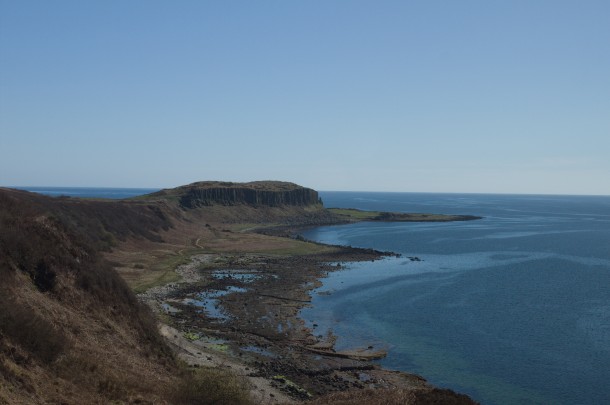 To this end, not only is the Centre running courses for students studying Geology and Geography to academic level, and providing accommodation to University parties doing the same, but in July we will run our first week’s geology course for beginners or  those who are just interested in learning more or revisiting old haunts. Following this, in September we aim to run a second Geofest over the weekend of 16th -17th September. So if you are interested or know someone who might be, please contact us.

The Centre is also leading the local community in an effort to gain Geopark status for the island. Talking with many academics, they believe that Arran should have been one of the first to be considered. Sadly we have yet to be recognised. Working with the local Arran Heritage Museum and the National Trust for Scotland, our aim is to enhance the experience of a trip to Arran by developing an app for a mobile phone to locate sites of interest, and also to employ a seasonal ranger/geologist to take people out and show them the wonders of our island. We will also have a team of contractors who will aim to upgrade and upkeep existing routes to many of the sites.

So, what would entice you to Arran if you have never been, and what can you look forward to?

Historically on the North Coast we have Huttons Unconformity, an angular relationship similar to Siccar point where sandstones overlie the Dalradian metasediments which in turn  have a capping calcrete at the junction.

Also on the North Coast and featured in Sir David Attenborough’s original Life on Earth series, we have our giant myriapod trail “Arthropleura” one of the planet’s oldest fossil tracks.

In the West of the island we have Drumadoon sill, a spectacular 60 m high promontory with a sea stack demonstrating beautiful columnar jointing, together with smaller sites such as the fossil tracks left by “chirotherium”.

At the far South of the island at low tide you can marvel at the Kildonnan Tertiary dyke swarm. Anyone who is lucky enough to venture to Thingvellir in Iceland and see sea floor spreading at first hand must marvel at the sheer number of dykes emplaced in a kilometre of crust. Applying a bit of Hutton’s wisdom, Iceland’s present is Arran’s past. In the far distance you can also see the sills which make up Pladda, Holy Island and the volcanic plug that is Ailsa Craig.

This is just a small taste of what Arran has to offer, and completely ignores the fun that can also be had with outdoor activities such as sea kayaking, mountain walking amidst the granite massif, gorge walking, mountain biking or seeing a red deer stag, red squirrel, otter, seal, golden eagle or basking shark for the first or umpteenth time! I hope you will take the opportunity of visiting our little island sometime in your lifetime.