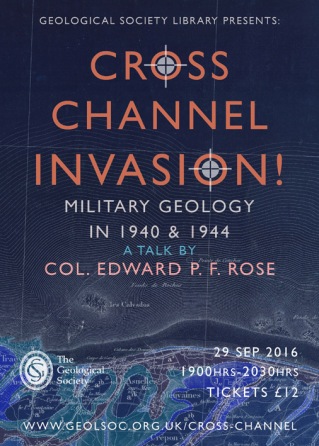 The Geological Society Library’s first outreach event (in 2014) was held to coincide with the centenary of the beginning of the First World War. Military geology historian Dr Ted Rose, FGS, presented ‘Geology at the Western Front’, a restaging of a lecture originally given by the Australian geologist Lt Col Tannatt Edgeworth David to the Society on 26 February 1919.

On 28 September 2016 Dr Rose returned to deliver ‘Cross Channel Invasion! Military Geology in 1940 & 1944’, a talk on how geology was used by both the German and Allied armies of the Second World War, notably in preparation for the Normandy Landings of June 1944. The evening ended with our customary display of related material from the Library collections, and for today’s post we’ll touch upon the Society in World War Two and the contribution of the two women who ran the organisation during the war years.

Geological Society in Wartime
By the end of 1941, the library, map and museum collections of the Geological Survey in South Kensington (after suffering two indirect hits from air-raids in 1940 and 1941) had been evacuated to the University of North Wales, Bangor. Despite the Society also suffering similar bomb damage, its doors remained open. As a result it was the largest repository of geological knowledge in London and its Library and map collections were utilised by government departments and the military during the War.

The Ordinary General Meetings (that is the scientific meetings) still took place but on a less frequent basis. Previously beginning at 5.30pm, they were now scheduled for 3pm then pushed further back to 2.30pm in order to close the building at 4pm for staff and Fellows to make their way home before the nightly air-raids began.

The Society’s Assistant Secretary and journal editor Arthur Greig (1893-1989), who had previously served in the First World War, was called up again and his military duties involved aerodrome defence in South East England, guarding the Tower of London. During this period he still undertook some editorial duties, but the Society’s day to day business, and much of the editing of the journal was effectively taken over by the Librarian Jane Eastwood (1908-1985), aided by the clerk Nancy Morris (1912-2014).

Library collections
Mindful to minimise possible destruction to its most precious Library material, the Society’s rarer items and archives were sent for safekeeping to the National Library of Wales, Aberystwyth at the end of 1939, and a further twelve boxes sent to the Bodleian Library, Oxford the following year.

In November 1939, the House Committee reported that the rooms and passages on the ground floor had been ‘blacked out’ and wire netting nailed across Library windows as part of the air-raid precautions.  The wire netting offered little protection during the air-raid of the night of 16/17 April 1941, which blew out the windows, the ceiling glass and damaged other furniture and fittings. Nancy Morris recalls the courtyard being ‘a sea of glass’ and that she and Jane Eastwood spent the entire day ‘hurling slabs of glass into Piccadilly’ [Letter from Nancy Morris, June 1993].

It was therefore thought prudent to safeguard the Library’s main book collection and a call was sent out to Fellows to act as custodians for the stock. The Annual Report of 1942 records that approximately one third of the books (estimated at over 8,000 items) had been evacuated by the end of 1941 (at a cost of £180 11s).

Call for aid in the evacuation of the Society’s Library books, from the Abstracts of the Proceedings of the Geological Society of London, no.1378, 10 May 1941

Despite a large proportion of the library being held by Fellows in their lofts and basements, books were still available to borrow as Nancy Morris, Society clerk between 1940-1962, recalled,

“A system of paper and string was brought into action. The Fellow requiring the books was told to write to the Fellow who had it evacuated who with paper and string supplied by us, sent it to the one who wanted it and he returned it direct, so none of these books came back into London.” [Letter from Nancy Morris, June 1993] 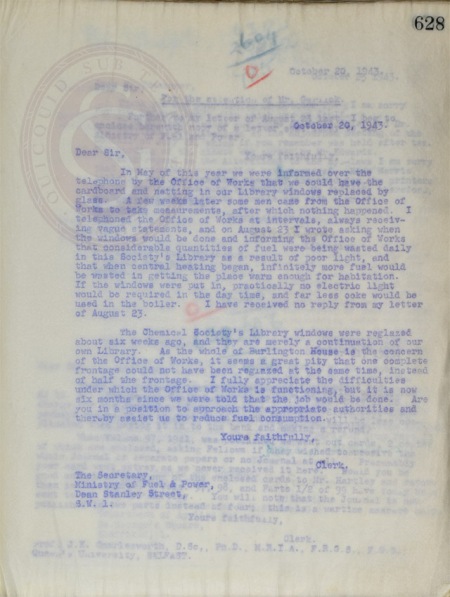 This letter from Nancy Morris, addressed to the Ministry of Fuel and Power, complains about the delay in reglazing the windows after more bomb damage. After six months, the windows were still blocked up with cardboard and netting resulting in considerable quantities of fuel being wasted in lighting and heating. (GSL/L/S/26, 20 Oct 1943)

Fellowship Arrears
During the First World War, the annual fees of Fellows serving in the armed forces were waived during the period of their military service. This was not the case during the Second World War, and all members whether serving in the armed services or not were expected to pay their dues. From 1940, the Society’s Blanford Fund (a special fund established in 1897 to help pay fees of Fellows in reduced circumstances) provided limited support for Fellows who could not pay the full amount of their subscriptions (then 3 guineas per annum).

The list on the left was prepared for the Council Meeting of 16 February 1944 showing the defaulters, including POWs and those residing ‘In Enemy or Enemy Occupied Territory’. The two categories were exempted from being ‘struck off’ the list of Fellows, but were expected to make up the shortfall after the War.

The handwriting belongs to Nancy Morris, who in May 1942 had taken over the running of the Society when the Librarian ‘Miss’ Eastwood (married name Mrs Mower-White) took six months maternity leave. Eastwood returned on a part-time basis in 1943, but Miss Morris (married name Mrs Tupholme) retained some of the senior duties such as preparing papers for Council.

The above maps, however may offer a clue. In preparation for the Normandy Landings, the War Office issued reproductions of the 2nd edition of ‘Carte géologique détaillée de la France’, the most recently published geological maps of the area available. The slideshow compares sheet 29 from the Society’s original copy from 1914, and the reproduction by the War Office issued in 1944. Although the latter map has been cut down into smaller sections, you can see that the original folds of the source map have also been duplicated.

Thanks
Many thanks to Dr Ted Rose

2 thoughts on “Door 14: The Geological Society during the Second World War”