Earth Science Week 2016 kicks off tomorrow, with events taking place across the UK and Ireland!

We’re thrilled to launch the week by announcing the winners of our 2016 photography competition, ‘Earth Science in Action.’ We received hundreds of fascinating entries interpreting the theme in various ways, from dynamic Earth processes to geologists at work, and the winning images, we think, reflect this brilliantly.

Thank you to everyone who entered – we so enjoyed looking through your photographs!

The photograph, says Tim, was captured while camping with an old friend on the astonishing Pembrokeshire coastline.

“The conditions were dark and awkward with sea mist and spray coating the camera and lens. I lost the foot of my tripod somewhere in the large stones underfoot. There are three sources of light here: the low ambient light of the scene and two LED flashlights; one directed by me beside the camera and one by my friend.”

Says Catherine, ‘the photograph was taken during a rope access rock fall risk assessment of the microgabbro on Salisbury Crags in Holyrood Park, Edinburgh. I’d like to think it demonstrates Earth science in action!’ 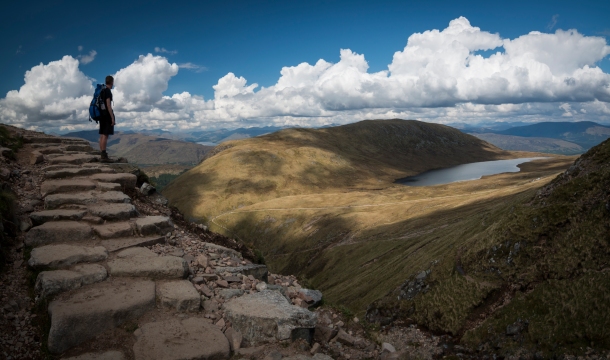 ‘Taking a moment’ says James, ‘to catch our breath and enjoy the view of lochan meall an t-suidhe (‘Halfway Lochan’).’ 3 thoughts on “The 2016 Earth Science Week photo competition – the results!”