‘Frankly my dear, I don’t give a geosite’*

We have finally unleashed the 100 Great Geosites list on the world this week, which has gained some considerable attention!

The geosite nominations, which are famous for their excellent geology or spectacular scenery, have also caught the eye of many a film maker over the years, who have used the scenery in the UK as a backdrop to films and TV series.

So, welcome to the Geosites film quiz!

Your challenge: using the rather generous descriptions below, work out which movies were filmed at the following geosites. All the sites below were nominated for inclusion in the final list – those with logos beside them made it in.

Check back tomorrow for the answers!

The dramatic landscape of the Causeway coast was chosen as the backdrop to this VERY popular tv series. Fans might better recognise this location as ‘Storm’s End’……

The varied landscapes and geology of the UK have long been a muse for the literary greats over the centuries but which 90s film of a classic book was filmed in Lyme Regis?

The rocks on Purbeck have functioned as building stones for many a famous building (ourselves included!) but which famous British movie star was it home to for the production of this film where she was charged with looking after seven ne’er-do-well children! ? 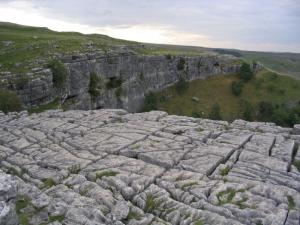 If Glencoe is the daddy, this one is a close second in film location-geosites match ups! This epic 8-part film series filmed one of its  scenes where two of the characters set up camp on Malham Cove’s limestone pavement. But who was it and it which of the 8-parts did it feature? 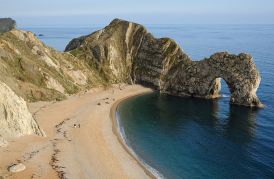 Durdle Door was just one of the backdrops for this biographical film about a famous British author (whose birthday it is today!). It featured a whole host of national-treasure British actors including one ‘quite important’ one!

7. The Storr, Isle of Skye (part of Trotternish)

The epic, otherworldly landscapes of the Isle of Skye were recently used as part of this big budget science fiction film. It was used as a location where two scientists find ancient cave paintings which lead them on a journey into deep space, but what film is it?

(May or may not be famed for this quote…. Look, I’m just a geologist. I like rocks. I LOVE… rocks. Though it’s clear you two don’t give a shit about rocks but what you do seem to care about is gigantic dead bodies. And though I don’t really have anything to contribute in the gigantic DEAD BODY ARENA… I’m gonna go back to the ship. If you don’t mind.)

Marloes Beach was used in the recent dark re-telling of this Brothers Grimm fairytale, but which story was it?

This beautiful lookout in the heart of the Peak District was famously used in which British film of a literary classic starring a certain Keira Knightley….

The crazy folded formations found along the coast at Hartland Quay were used for the filming of which 50’s era film of a childhood classic tale?

The beautiful landscape of the Mourne Mountains in Northern Ireland is home to not only filming of the answer to the first question but also a recent heart wrenching tale about a mother who had lost contact with her child several decades earlier, but which films it it?

The beautiful vista seen from the top of Arthur’s Seat and the Salisbury Crags was used as a romantic spot for ‘a day’ for a couple in which popular British film?

Hadrian’s Wall, and the Great Whin Sill it is built upon was used in the filming in this 90’s blockbuster about a Nottingham hero…..