So far, in our tour

through the archives of notorious GSL Fellows, we’ve met incarcerated book collectors and hat stealing scamps. The third of our dreadful Fellows is in an entirely different league. Meet Dr J W Webster of Massachusetts, “whose name was ordered to be erased”…..

In December 1814, the Society established a ‘Foreign Member’ category of honorary membership.  As the name suggested, the title was limited to non UK individuals.  Those eligible should be ‘Distinguished mineralogists and persons who had by their communications or contributions promoted the objects of the Society’.

As most Foreign Members were elected in absentia, it is likely that many had not and never would set foot inside the walls of the Society.  This was not the case with John White Webster.

Dr John White Webster of Boston, Massachusetts, USA, was elected as Foreign Member on 19 April 1822.  A Harvard medical graduate, he is known to have been in London studying as a medical pupil and dresser at Guy’s Hospital between 1815-1816.  During this period, he is recorded as having attended two Ordinary Meetings of the Society.  On 16 February 1816, a ‘Mr Webster’ was introduced as a visitor by James Laird (Webster’s 6th signatory) and a few months later on 3 May 1816 ‘Mr Webster’ again attended a Meeting, this time introduced by Henry James Brooke (Webster’s main proposer), and through whom the Society was to receive a donation of North American geological specimens from Webster on 1 November 1816.

A second and possibly final donation was listed as being received from Webster on 4 January 1822.  The book, ‘A description of the island of St. Michael, comprising an account of its geological structure; with remarks on the other Azores or Western Islands’ by Webster and published in 1821, is still held by the Library. 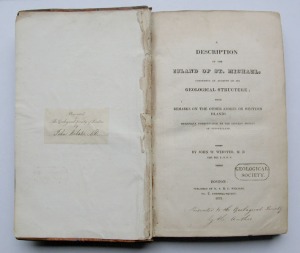 Copy of Webster’s book, donated in 1822 and still held by the Library.

After this, there are no further mentions, save one, that I can find for John White Webster in the Society’s Archives.  In the Minutes of the Meeting of Council, 19 June 1850 (GSL/COM/1/7), point no.13 states, “The Election of two Foreign Members, in the place of M de Blainville, deceased and of Dr J W Webster of Massachusetts, whose name was ordered to be erased, was considered…”

Unlike the other two Fellows in this series, no archival documents were retained to explain Dr Webster’s abrupt erasure from the list of Foreign Members, possibly because there was no need to.  The notoriety and media storm surrounding the case was not restricted to just the American press. It gained international coverage, due to the gruesomeness  of the offence which had been committed within the walls of a prestigious institution by a seemingly upstanding member of society.

‘The case of the century’ – The Parkman-Webster Case

After London, John White Webster had travelled to São Miguel Island in the Azores to begin practicing medicine.  During his two years there, he wrote his first book and married Harriet Hickling, the daughter of the American vice-consul on the island.

The Websters returned to Boston in 1818 where he set up in private practice, but it was not financially successful.  In 1824, utilising his knowledge and interests in geology, Webster became lecturer of chemistry, mineralogy and geology at his old university, Harvard Medical College, and appointed its Erving Professor of Chemistry in 1827.  Academic lecturing, it seems, did not pay enough either to cover Webster’s expenses and he had resorted to borrowing increasingly large amounts of money from friends and acquaintances, and securing it against his remaining property notably his mineral cabinet.

Sometime towards the end of 1849 his main creditor, the wealthy George Parkman, had discovered that another loan had been secured against Webster’s mineral cabinet, which he had held as collateral along with Webster’s other property since 1847.  Furious at what he considered to be blatant dishonesty, Parkman began to pursue the Professor more aggressively for payment of the debt.  On the morning of Friday, 23 November 1849, Webster called at Parkman’s residence and arranged a meeting for after 1pm at his laboratory at Harvard Medical College where he told Parkman that he would be paid from the proceeds of his forthcoming chemistry lectures.  The last independent sighting of Parkman alive was at 1.45pm entering the College in Grove Street that afternoon.

On Saturday, 24 November, Parkman was officially reported as missing.  Two days later his family offered a $3000 reward for information, and with 28,000 wanted notices pasted all over the city, Boston was alive with speculation and theories about what had happened.  Search parties were sent out to neighbouring towns, Parkman’s properties were examined and the river and harbour dragged for the body but there was no sign.

Ephraim Littlefield was the Medical College’s janitor, and his and Webster’s rooms were situated next door to each other at the Grove Street building on the ground floor.  He would later recall that on the Monday preceding Parkman’s disappearance, Webster had questioned him very closely about the basement vault directly under the Professor’s laboratory where cadavers were kept prior to dissection, in particular its layout and how to access it.

Part of Littlefield’s duties were helping to prepare the rooms for the College lectures and clearing up afterwards.  On the afternoon of the 23 November, Littlefield had tried to gain entry to Webster’s laboratory to tidy up but found the door locked.  He thought he could, however, hear Webster moving around inside and the sound of water running. 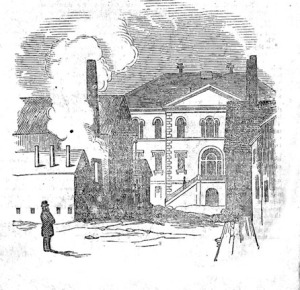 The next day, Saturday 24 November, Littlefield observed Webster coming into the College carrying a bundle wrapped up in newspaper under his arm.  Webster again locked himself into his laboratory all day.  Although the Professor was not seen at the College on Sunday, his laboratory door was still resolutely locked and would remain so for the next few days.

The College was eventually searched on Tuesday 27 November and Professor Webster, dressed in a smoking hat and overalls let the search party into his rooms.  When the party reached the door of the Professor’s private privy, Littlefield claimed that Webster drew attention away from it by pointing them in the direction of another room.  The search party did enquire about the vault under the laboratory floor and passed a lantern down through the trap door but could not see anything.   A few hours after the fruitless search, Webster gave the janitor a gift of a Thanksgiving turkey, something which was completely out of character.

Suspicions now aroused, Littlefield kept a close eye on his next door neighbour.  On Wednesday 28 November, the Professor was in his laboratory early.  Laying face down on the floor, Littlefield watched him from under the door in the adjoining storeroom.  Although only seeing up to Webster’s knees, the janitor could observe the Professor filling up the laboratory furnace with coal.  After five minutes, he could see no more and gave up.

At around 3pm the same day, Littlefield testified that the wall adjoining the furnace was so hot that he could barely put his hand to it.  Webster was out and the laboratory door inevitably locked, but Littlefield managed to climb in through the window.  He found the furnace burning fiercely and both of the hogshead water butts virtually empty, as were the two barrels of pine kindling.  Also up the stairs to the Professor’s private room, and on floor of the room itself were unusual wet spots which tasted like acid.

On Thursday 29 November (Thanksgiving Day), Littlefield made his first attempt to break through the wall in the vault directly under Webster’s private privy.  Not getting very far, plus distracted as he was attending a Thanksgiving ball in the evening, Littlefield did not resume his digging until the next day (Friday 30 November).  With the aid of a crowbar, chisel and hammer borrowed from two other Harvard Professors (who seemingly encouraged Littlefield’s endeavours) he at last made a hole in the wall.  Peering into the gloom he could make out the shape of what looked like a human pelvis.  Beside it he also saw a dismembered thigh and leg.  Later, fragments of bone and teeth were found in the furnace and the rest of the victim’s body was discovered hidden in a tea chest filled with tan at the corner of the laboratory.

On his arrest, Professor Webster attempted to commit suicide by taking strychnine but it only made him ill.  He stood trial on 19 March 1850 and the jury returned a verdict of guilty on 30 March.

The judge, Chief Justice Shaw, sentenced Webster on 1 April, ‘And now the sentence of the law is, that you, John W Webster, be removed from hence to the county jail, there to be kept in safe custody, until such day as the Executive shall appoint, when you are to be hanged by the neck until you are dead; and may God have mercy on your soul.’

Webster appealed his conviction but it was turned down.  He then appealed for clemency from the state’s Governor, which included a confession where he stated he had accidentally killed Parkman in a fit of anger, then panicked and tried to dispose of the body.  This too was unsuccessful.  Dr John White Webster was hanged on 30 August 1850.

After the court case, a number of the US newspapers republished the reports of the trial in handy pamphlet form to further satiate their readers’ appetites.  For the full, gruesome details, including a description of one of the earliest uses of forensic medicine to identify the victim (ironically with the aid of the latest in medical equipment which was to be found at the crime scene) see ‘The Parkman murder trial of Prof John W Webster, for the murder of Dr George Parkman, November 23, 1849…’, Boston: Printed at the Daily Mail Offices (1850) and the ‘Trial of Professor John W. Webster, for the murder of Doctor George Parkman. Reported exclusively for the N.Y. Daily Globe…’, New York (1850).