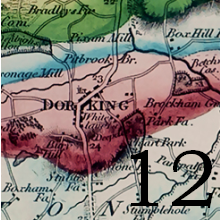 Our forage through the more disreputable annals of GSL history continues…

Guy Mortimer Fry was elected a Fellow on the 4 December 1901.  His application form stated that he was a ‘Mining Engineer and Mineralogist’ with ‘Extensive experience (geological) in Canada, United States and South Africa.

Fry does not seem to have been particularly active in the Society.  As was common with many members during that period he may have been happy to simply receive copies of the ‘Proceedings’ and attend the odd meeting here and there when in town.  Alternatively it was not unusual for some individuals working in professions connected with geology to specifically join in order to be able to add ‘FGS’ to their business cards and hence give themselves an air of authority – despite the fact that the Society at that time was not a professional body and required no formal geological qualifications to be a member.

On 12 February 1906, Aubrey Strahan, who was later to serve as President of the Society, wrote to the Assistant Secretary Leo Belinfante, enclosing the following newspaper cutting in case it had escaped notice.

The cutting – wonderfully entitled ‘LONDON POLICE COURTS. Scamp converted in Prison’ – details the case against Fry, who was accused of not paying for two cab journeys he took one after the other on the same day.

To compound his shame, later that same night Fry was arrested and fined 10 shillings for being drunk – which he avoided paying by returning to his home in Jersey.

Justice caught up with him on his return to London the following year, when he was imprisoned for seven days for non-payment of the fine and charged with absconding without paying for the cab journeys.

Fry’s defence: he’d only got intoxicated in the first place over the disappointment that a painting he wished to sell was worth less than he was told, was an upstanding member of the public and a Fellow of the Geological Society to boot and finally that his seven day stint in prison had converted him to Christianity.

All this fell on deaf ears, and he was ordered to pay the cab fares, 40 shillings in fines with 44 shillings in costs.

Unlike the case of Henry Lewis Phillips, recounted in the previous blog, Council could easily remove Fry from the list of Fellows for unbecoming conduct, as his annual subscription was in arrears.

This does not appear to be Fry’s only brush with the law.  According to the Proceedings of the Old Bailey there are at least another three mentions of ‘Scamp’ Fry.

Finally on 10 September 1912, Fry pleaded guilty to being an undischarged bankrupt and again obtaining monies by false representation.  Abandoning any pretence at respectability, by now Fry admitted to being a hopeless dipsomaniac.  He was sentenced to 12 months hard labour.

Lead convener, Lucy Williams, and our President, Mike Daly, busy making a film for this year's William Smith Meeting in our beautiful Council Room at Burlington House.
Recently digitised from our collections, this geological map of Jersey was created by Richard John Nelson around 1828 🗺️
“Everything we know about landscapes on Earth and in space is rooted in geology. Spacescapes is an exhibition about the wonder of the solar system and our place in it. Taking in these incredible images, which feel both familiar and alien, people can do the work of planetary scientists by comparing and contrasting our home with distant planets and moons. Piecing together clues that reveal the origin and evolution of our universe, you might find yourself more at home in the furthest reaches of our galaxy than you realise!”
Spot the difference 👀
📅Just one week until our exhibition Spacescapes: Postcards from our solar system opens in the Burlington House courtyard. Stay tuned for a sneak peak early next week. Plan your visit at https://spacescapes.geolsoc.org.uk/
Very soon, NASA's Perseverance Rover will take its first rock sample on Mars!