In the past three or so years as Archivist to the Society, a good proportion of the enquiries I receive concern the major figures of geology and science.  You know, those upright, moral Fellows who have made substantial contributions in their field and are rightly held in high esteem by their peers.

However, this can give a rather skewed vision of the types of people who are recorded in archive collections.  What about the more obscure individuals who also appear in the annals of history but for somewhat less noble reasons?

When a person was elected a Fellow in the 19th and early 20th centuries, in theory they could remain a member of the Society for as long as they wished (and kept up to date with their annual subscriptions).  There were certain circumstances, however, where Council would remove a member from the list of Fellows – if an individual had publicly disgraced himself (and therefore the Society) by being convicted of a criminal offence.

The Archives contribution to the Advent Calendar blog is to highlight three of these ‘Criminal Fellows’ in our records.  Members who perhaps have more in common with characters from the pages of a Penny Dreadful than any scientific tome.

No.1 – the incarcerated book collector

On the 11 July 1896, Jethro Justinian Harris Teall, in his capacity as one of the Honorary Secretaries of the Society, wrote to Henry Lewis Phillips* politely suggesting that in light of Phillips’ conviction at the Old Bailey the previous month, he might want to do the gentlemanly thing and resign his Fellowship of the Society. 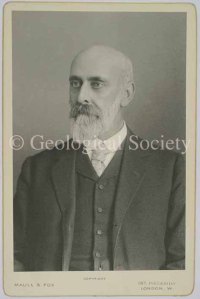 Phillips, who had been a Fellow since 1873, was not in the mind to meekly accept this fate and refused.  His reply to Teall, written on 16 July, is full of protestations of innocence and threats of legal action against a number of the witnesses for perjury.  Unfortunately these declarations were somewhat assuaged by it being written on Pentonville Prison notepaper.

According to the record of the court case, which can be found in the Proceedings of the Old Bailey, Phillips was accused of obtaining a large number of items from various booksellers and other suppliers around the country on credit but never paying for them.  As an undischarged bankrupt Phillips should have declared his financial status, and his failure to do so led to him being charged with deception.

The transcript of the trial records the testimonies from a long list of creditors who were swindled out of rare books, silver candlesticks and optical equipment by Phillips [and his co-accused, his son Henry Stracy, against whom the case was not proven].  Phillips, it seems, also attempted to sell the books on with varying success.  When police sergeant Alfred Ward eventually came to arrest him, he reported that in Phillips’ house “there were books arranged on shelves as if in a library, and all over the house, from top to bottom; it was full of books; there were thousands, I might say; some in cases, some on shelves, some on the floor, some reaching from floor to ceiling.”  Despite his assertions that he could in fact pay for the books and calling witnesses to testify to his good character, Phillips was found guilty and sentenced to 10 months hard labour.

The Society’s Council took legal advice on what was to be done.  The recommendation that Phillips should be able to defend himself in person at a meeting at the Society was clearly hampered by his current detention at Her Majesty’s Pleasure.  Therefore it wasn’t until a few weeks after his release from prison on 21 April 1897, that Phillips finally attended the Society and was convinced to hand in his resignation.  In fact there are two resignation letters in the Archives, both dated 10 May 1897.  The first was clearly written in the Society as it is on our headed paper.  The second was a far more considered version, composed when he got home, and which reiterated his intention to pursue his legal challenges.

Alas, nothing further is recorded regarding the outcome of Phillips’ planned court proceedings in the Society’s Archives. However, at its meeting of 12 May 1897, Council declared that ‘all documents connected with this case should be carefully preserved’, presumably in the event he attempted to reapply.