The Geological Society, alongside a number of institutions, groups and individuals, is supporting the University of Edinburgh Library’s campaign to save Charles Lyell’s notebooks, which are due to be sold abroad. 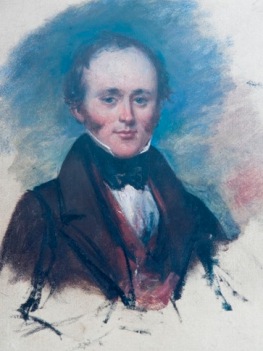 Charles Lyell (1797-1875) is well known as a key figure in the history of science, particularly for his part in the Darwinian evolutionary debates and in convincing readers of the significance of ‘deep time’. During the past decade, Lyell’s geographical theory of climate and his subdivision of recent geological strata have gained renewed attention in connection with discussions of climate change and the Anthropocene. The author of the seminal book ‘Principles of Geology’ (1830-33 and later editions) Lyell was twice President of the Geological Society, in 1835-37 and 1849-51, and received the Society’s Wollaston Medal in 1866.

As the Cambridge historian of science Jim Secord notes, ‘the Lyell archive is almost certainly the most important manuscript collection relating to nineteenth century science still in private hands.  At its core are 294 notebooks, which provide a daily record of Lyell’s private thoughts, travels, field observations and conversations.’

These remarkable documents were sold to an unknown buyer overseas towards the end of last year. In response, the UK government has imposed a temporary export ban to enable fundraising to purchase and conserve them, and make them available online for free to the public. The sum required is £1,444,000; major donors have already pledged more than a third of the total needed.

The temporary export ban has an initial deadline of 15th July – this may be extended until 15th October if significant progress is made.

The University of Edinburgh Library, which already has the largest collection of Lyell material, is organising the fundraising campaign, and are asking all who are interested to pledge a donation, however small, which will only be collected when the required amount is achieved. Large numbers of individual donors will help to demonstrate substantial public interest and concern, so please do give if you can.

Find out more about the campaign on the University of Edinburgh website.

The British Association at Newcastle by Thomas Henry Gregg (?1838). Charles Lyell sits at the centre of the table. GSL/POR/18

One thought on “Save Charles Lyell’s Notebooks”