A guest blog from the British Geological Survey about the UK Geoenergy Observatories project. The project aims to create an observatory which will study the subsurface, in order to contribute to the responsible development of new energy technologies in the UK and internationally.

A world-class observatory for the Cheshire Science Corridor

The Natural Environment Research Council (NERC) and the British Geological Survey (BGS) are proposing to create a sophisticated observatory to research new low-carbon technologies and foster world-class science and innovation.

Who are the BGS and NERC?

The BGS is an independent public science institute that has been gathering scientific evidence on geology for more than 180 years. NERC is the UK’s main funding body for environmental science.

What is a Geoenergy Observatory?

Just as during the space age astronomers wanted to create the Jodrell Bank Observatory to discover some of the secrets of the universe, 70 years later geoscientists want to create an observatory that can look into our own planet to discover new solutions for global problems.

In 2015, NERC commissioned a group of leading geoscientists to help understand these science challenges, and their science plan will guide research at the field sites. Both field sites will have a network of deep and shallow boreholes containing state-of-the-art listening devices, which will act as stethoscopes to measure precisely the state of the underground in its natural condition and any changes in great detail. The data will be open for all through an online portal.

These ‘eyes and ears of the underground’ will be able to measure the level of the water table, and the temperature and chemistry of groundwater, and how it is moving. They will also be able to detect minute movements and other changes in the physical nature of the rocks. They will measure seismicity and a range of other characteristics.

Why do we need to know more about geology? 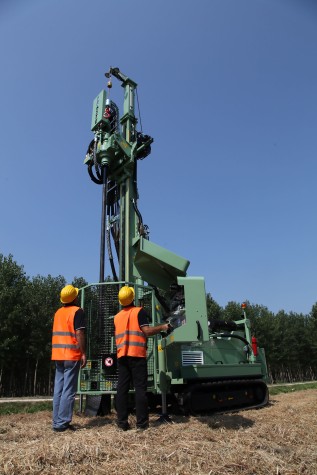 Underground research is important for tackling climate change. Our research will help to understand ways to decarbonise the energy supply. In the future, instead of taking things from the rocks, we’re likely to need to use the underground for energy, heat and cool storage, and possibly for storing atmospheric carbon dioxide. For example, the underground could provide a place to store large amounts of energy, resolving the intermittency of renewables’ power.

Renewable energy cannot yet produce all the power we need to fuel our economy. Wind, solar and tidal are vital for decarbonising UK energy production. But we need to be able to store excess energy when it is being generated to balance the peaks and troughs in supply and demand.

The batteries required for this storage would be enormous and would require a lot of mined metals. It could be possible to use geology as an alternative energy store, compressing air underground in the sandstone, and then releasing it to make electricity at times of low production or high demand. More research is required to test the technology.

Carbon storage is an important way to lower emissions. Deep sandstones in offshore Britain might help us to return carbon to the ground from the emissions captured from the UK’s power stations, factories, refineries, transport network and residential communities. An onshore research site will ensure the UK has the scientific capability and engineering skills to make carbon storage an option in the plan for decarbonising energy supply.

Geothermal energy may be a sustainable and scalable heat source. But we need to understand more about heat transfer, subsurface chemistry, biology and water movement to find out whether we can scale up geothermal energy safely and sustainably.

Countries all around the world are moving to lower-carbon fossil fuels in their bid to fight climate change. Gas, rather than coal, will continue to be used in power stations until alternative energy sources can replace fossil fuels altogether. Understanding what happens in the subsurface will continue to be important to inform regulation and permissions.

New energy solutions are needed and these require robust scientific research. The UK Geoenergy Observatories will provide important new evidence for geoengineers, geoscientists and geologists to understand the subsurface. This evidence base will inform future decision-making on use of the subsurface, tackling climate change and protecting the environment.

Why have you chosen Ince Marshes as one of the research field sites?

Driving along the M56 between Runcorn and Ellesmere Port you see Frodsham’s sandstone cliffs to the left, and the flat fields, refineries, factories and wind turbines clustered around Ince Marshes on the right. This view provides the clues to the rich geological environment that lies below.

Ince Marshes is one of the few places in the UK that geologists can model in great detail, because high-quality geological data are available. These data have enabled geologists to design an observatory for the study of important energy and decarbonisation questions.

Frodsham’s sandstone cliffs continue deep under Ince and Frodsham Marshes. The deep sandstone rocks could be used to test energy storage that will support the UK renewable energy industry.

Research on the sandstone rocks below Ince Marshes could also provide vital scientific understanding to assess the feasibility of offshore carbon storage.

The layer of deep shale in the area means commercial companies are exploring for gas. If an application to extract gas is successful, researchers could also explore important geoscience questions by observing the technique.

Observing these different technologies before, during and after operation would provide data that would give scientists a new level of understanding on how the subsurface environment behaves.

Finally, Ince Marshes is within the Cheshire Science Corridor, which is an initiative to create a cluster of science, engineering and energy activity in the area. The science corridor is designed to strengthen Cheshire’s world-class research capability, complementing the existing Daresbury Laboratory, the Jodrell Bank Observatory, and specialist engineering, energy and science companies and universities.

The Cheshire Science Corridor aims to foster collaborations, innovation and entrepreneurship in science, engineering and technology – leading to the creation of high-skilled jobs and a buoyant science-based economy. 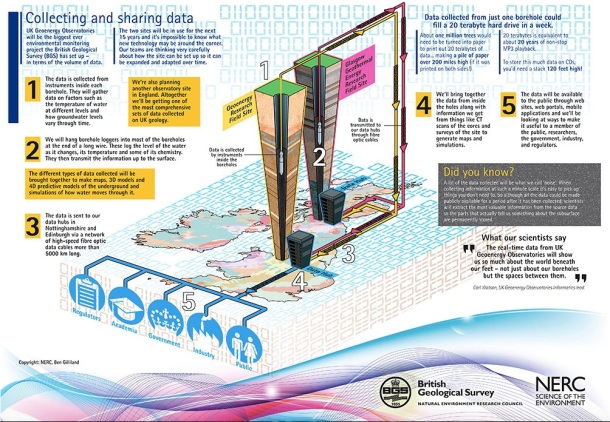 Collecting and Sharing Data (c. NERC/BGS) To see a larger version of this poster, which was presented at community engagement events, visit http://www.bgs.ac.uk/research/energy/esios/cheshire/home.html

How will this benefit me?

As a result of the UK’s long history of minerals extraction and other uses of the subsurface, environmental permitting and regulation in the UK is very stringent, and the UK’s regulation of oil and gas extraction is among the best in the world.

Regulation can always be further informed by new scientific research. An objective of the research at the Cheshire Energy Research Field Site will be to provide an independent evidence base to continue to improve regulatory practices around everything that happens in the subsurface, whether that’s managing an aquifer, understanding the impact of landfill sites or utilising the subsurface for energy.

Is this going to pave the way for shale gas extraction in Cheshire?

Valuable scientific research can be done with or without shale gas extraction occurring at Ince Marshes. If extraction does take place, the observatory would capture valuable scientific data. However, research is not dependent on extraction taking place. The BGS and NERC are not proposing any resource extraction. The BGS and NERC are not a part of the Petroleum Exploration Development Licence owner IGas’s plans and we have no influence over whether a commercial operator applies to extract gas at Ince Marshes. We are not part of the decision-making process. Applications to extract are determined by the local planning authority (CWaC) and by the permitting bodies (the Environment Agency and the Health and Safety Executive). We are not a statutory consultee on any proposal for shale gas extraction.

How do I find out more?

The British Geological Survey ran community drop in events in north Cheshire during autumn 2017. We will present our full plans at further local community meetings in spring 2018. Until then, visit: www.bgs.ac.uk/ukgeoenergyobs or email ukgeosenquiries@bgs.ac.uk for information.