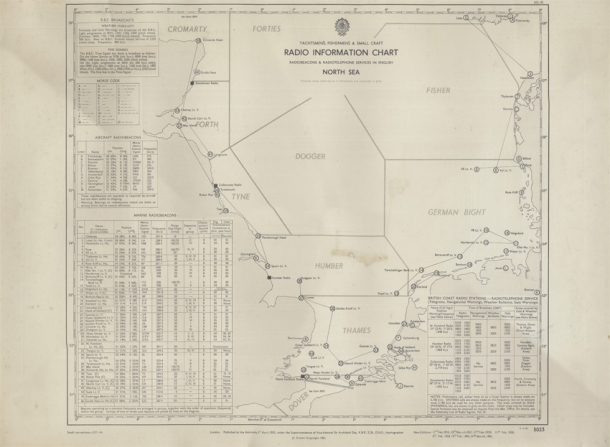 This is a map discovered rolled and stowed within a remote cranny in the Archivist’s Office, provenance uncertain.  It is presumed a former member of staff was a keen weekend sailor, or perhaps a radio ham.

It conjures images of storm-tossed seas on which bob storm-tossed boats filled with salted, storm-tossed fishermen swathed in oilskins and wellingtons.  Simultaneously it’s a lullaby of mellow sleepiness floating through wirelesses on longer, more gentle frequencies; radio-waves reassuring in their punctuality and regularity, lapping the shores of night-time.

The unintentional poetry of the sea has been accumulated gradually.  The doomed mariner Admiral FitzRoy, the first weatherman, issued storm glasses, hoisted signal cones, and transmitted telegraphically to warn ships of incipient inclemency.  With the new century came radio and the broad-cast.  Trawlers were equipped with crystal oscillators. Its vibrations could catch a forecast as they cast their nets for fish.

By 1949 the orthodox litany was established, carefully announced in clear tones four-time daily. Radiated from tall, transmitting spires of both Palaces, Alexandra and Crystal. The sea-sick and soon-to-be sleeper heard clear whether the windsock sagged gentle or was gale-ripped.

There were changes.  Dogger was divided.  Heligoland clarified.  The Minches removed.  Finisterre renamed FitzRoy; the Admiral commemorated at the edge of the world.  Yet after Ronald Binge has Sailed By, we can all still recite it together.   The National Maritime Prayer.

This map is not solely preoccupied with meteorology.  Navigation is its main concern.  Its contours are chains of beacons pulsing a steady rhythm at the boundaries of sea and land.  Triangulation by pattern of hyperbolae produced as steady, electromagnetic rhythms phase into and out of step with their neighbours.  A system designed for times of strife and implemented by Decca before they turned down The Beatles, now used by merchant seamen and single-handed yachtsmen alike.

A sailor may be many nautical miles from shore, safety and sleep, but they will know their longitude, latitude and barometric pressure; weather cyclonic or anti-cyclonic.  There be no dragons on this chart only kilocycles per second for the calibration of dials.  Short time-pips and long time-pips, Morse dots and Morse dashes.  Hazards are anticipated.  Do not take bearings on inland beacons.  Coastal refraction causes serious errors.  From transmission o’er 2182 kc/s abstain so those in peril may send signals plainly; for distress and for no other reason. 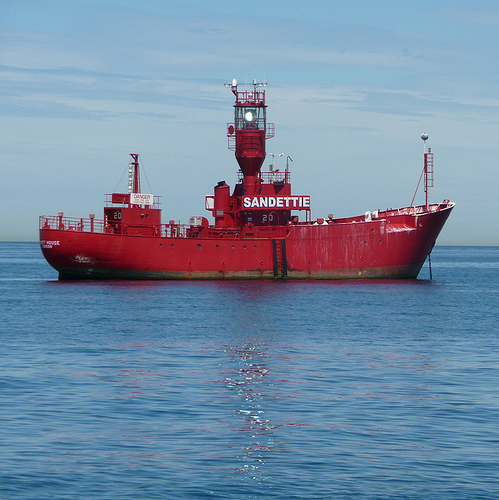 The calmness inscribed on this map by the Hydrographic Office will hush anxieties.  It will still a maelstrom of insomnia into the light airs and heavy eyelids of Beaufort’s scale.

Should you have been adrift this year, or forced to point your bows into towering waves for stability, I hope you are harboured safely this Christmas.  Merry Christmas and a Fresh New Year to you all.

If you’d like to buy a print of this map, you can.  Prints are available in various sizes from our Picture Library

As part of our education activities for the #YearOfSpace, we were delighted to be able to provide around 400 families with space science goody bags over half term!
Why become a member of the Geological Society? There are many benefits including networking, career progression, events, conferences, mentoring, access to research and much more.
Are you 16-18, studying A levels or Advanced Highers? Enter now to win funding for your school! In our Schools Geology Challenge students can showcase their interest in geology, learn more about the way geoscience impacts our lives, and put their teamwork and presentation skills to the test. Closing date for entries: 4th February 2022.
Do you have a passion for Earth sciences? As a member of the Geological Society, we will support your advocacy work to raise awareness of the profession.
Join us as a Fellow today and take advantage of mentoring opportunities. If you are looking to become a Chartered Geologist, you can benefit from the knowledge and guidance of our more experienced Fellows.
Carbfix turns CO2 into stone!