The fourth Great Geobakeoff is finally concluded! It’s been another epic year, with more than 40 of you entering the competition, with a combined total of nearly 80 entries – surely a record! Thanks also to those of you who shared your off-challenge geobaking adventures with us – for which we sadly only have space to share a couple of favourites:

#geobakeoff not very “risky”, but here is me and my son’s crusty (geddit?) bread earth and bread moon: pic.twitter.com/oJkwdsjBCI

Our next #geobakeoff entry – Mt Everest with too many tourists (very RISKY to reach the summit) by Hilde Koch + Maurice Brodbeck! @geolsoc pic.twitter.com/wgQ9rAk1uL

Onto the challenges – and once again, to our relief, every single one was completed! Huge thanks to everyone who joined in:

Broadchurch returned this year, and we celebrated with a nice and simple 10 point challenge. The results were delicious looking – particularly Alex’s many layered offering:

And Hannah’s millionaire shortbread cliffs, our favourite for this category!

The full compendium of Broadchurch 10 pointers:

A controversial challenge this, with much ensuing discussion over whether certain offerings were genuine horst and graben faults, or some other kind of fault masquerading as the real thing. Full marks to Louise for fixing hers at the eleventh hour, thus maintaining the geological integrity of the geobakeoff. 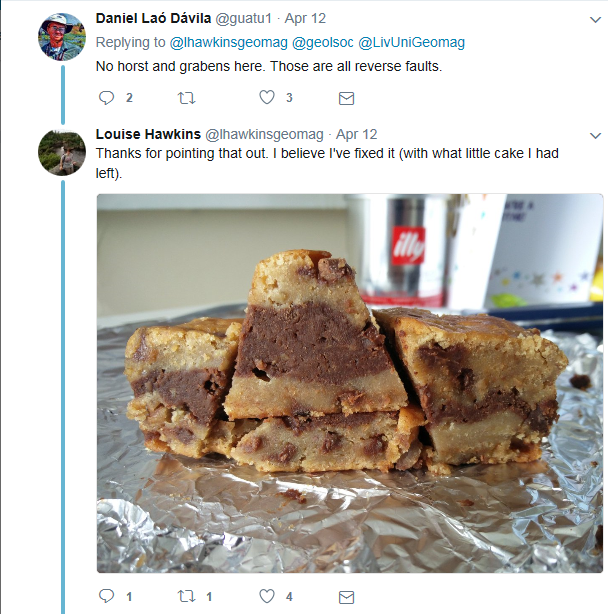 We enjoyed the full colour range of layered faults on offer here – but our pick for this challenge had to be Alex, for managing to craft a horst and graben fault entirely out of jelly. Not technically a bake, its true, but nonetheless magnificent.

Well done to all the horst and graben bakers! 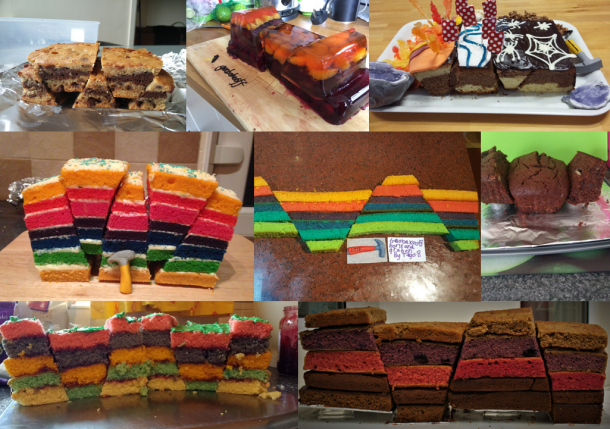 In honour of our current library exhibition (still on display at Burlington House!), the strange and wonderful world of 18th century fake fossils. Read more about Beringer’s stones here.

Many options to choose from here – around 2,000 of the stones were collected by poor, naïve Beringer in 1725. Our geobakers embraced the full range (whilst not forgetting the all-important geological hammer, of course). 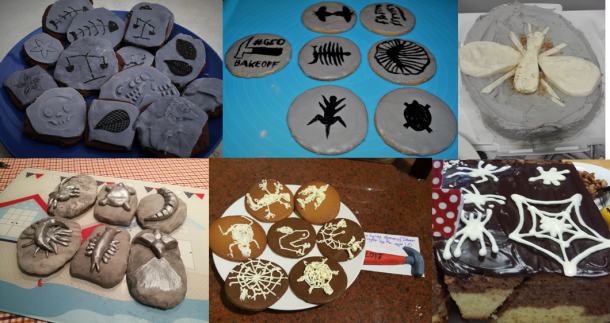 Our winner for this category is Hollie Colville, whose silvery-grey biscuits are so realistic, they could almost be…no, who are we kidding, THESE DO NOT LOOK LIKE REAL FOSSILS, NEITHER DO THE ORIGINAL STONES, HOW WAS ANYONE IN 1725 FOOLED BY THIS? 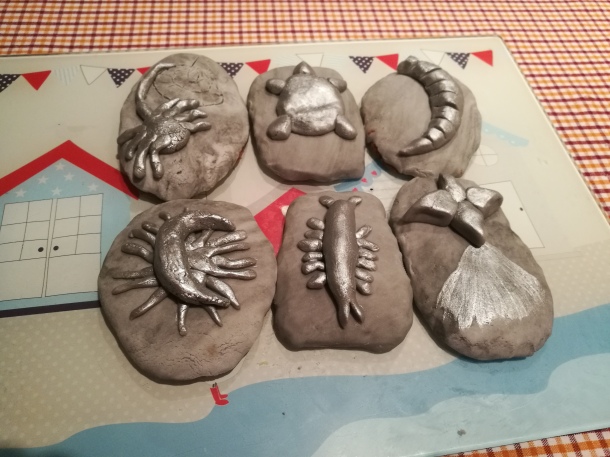 Understandably one of the most popular challenges – although we didn’t specify, almost all of you went for the beautiful Grand Prismatic Spring.

Props to Cara Callingham for going a different way – and including geodes (geodes are going to feature heavily later on, trust me) and an impressively watery waterfall!

Our top pick for this challenge had to be this absolute beauty from Hannah – so realistic, it could easily be mistaken for a health and safety risk:

The Yellowstone entries in full: 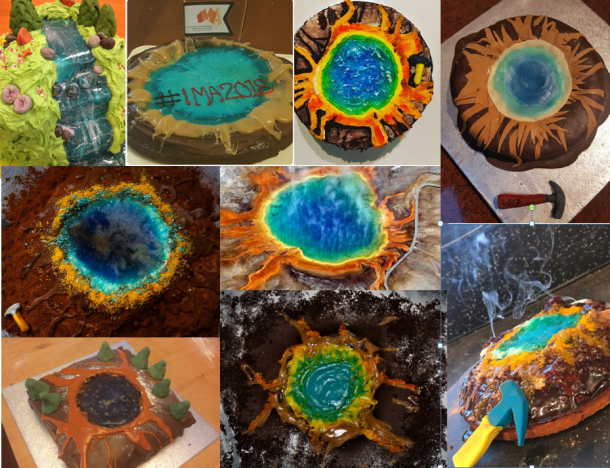 One of these Grand Prismatic Springs is not a cake.

50 points: The Door to Hell

We’re still getting over the fact that the Door to Hell even exists as a thing – meanwhile, the creativity of the geobakeoff community embraced this challenge with enthusiasm, candles, sparklers and, in some cases, simply by baking a cake and setting it on fire.

The challenge continues with another cakey creation from Paul, this time a rice crispy Door to Hell! #geobakeoff #besteatencold #geolsoc pic.twitter.com/yvnZQ2NHrH

We also loved this spooky creation from Alison Moss-Davies: 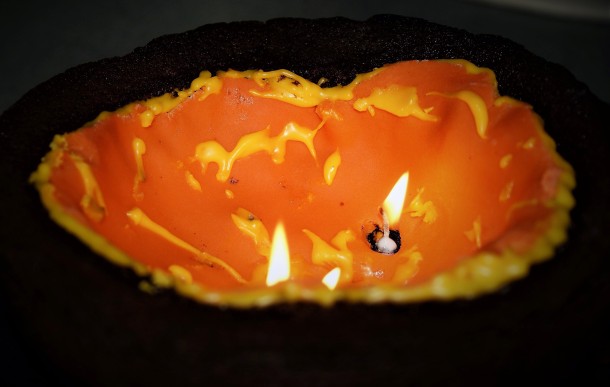 Tough to pick a winner here – you all went above and beyond – but our favourite comes from Envireau Water’s Anna and Leanne – who even sent us a behind the scenes video featuring all the action:

Well done, Door to Hell bakers. They’re all magnificent, and we hope you had the appropriate safety equipment standing by. 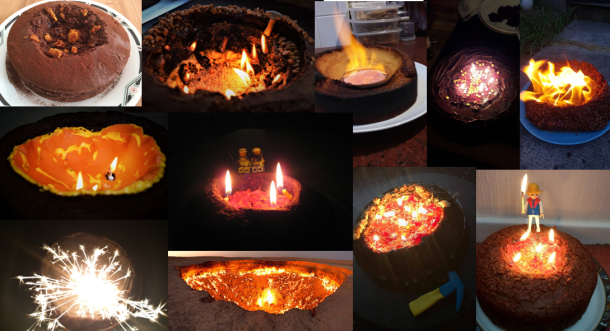 Seeing as how 2017 is the year truth and facts stopped meaning anything, we thought we’d include a fictional challenge in this year’s bakeoff – and Mordor offers plenty of choices for the adventurous geobaker. A straightforward volcano bake, the tower of Barad-dur, or the whole lot at once?

Some great efforts here to add to the drama of the scene. Geobakers added moody backdrops, orcs, and…are those chocolate bunnies…?

But the clear winner here was Liz Laycock’s AMAZING tower of Barad-dur, complete with appropriate lighting. A thing of terrifying beauty. 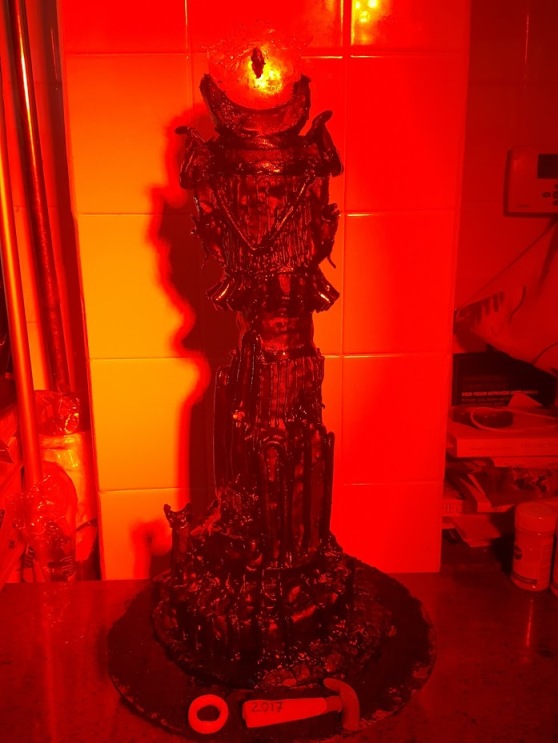 The Mordor entries in full: 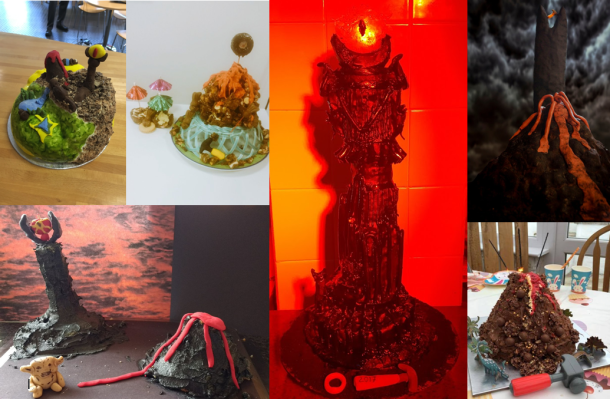 This was by far the most popular challenge, despite the fact that we weren’t really sure how you would pull it off.

No fewer than 19 – 19!! – geodes feature in what is surely the largest geobakeoff montage I’ve ever been called upon to produce. Highlights included Deirdre Walsh’s amazing geode cake, created for the iCRAG Centre geobakeoff:

A geobakeoff entry (and White Apron contender) all the way from North Carolina, from Seth James: My two geodes with really really crystal growth if I do say so myself! @geolsoc #geobakeoff pic.twitter.com/FzJcvntn1m

and our top pick of the geodes, from Liz Laycock and her self described team of ‘house raptors’:

Phew. So many geodes. SO MANY. 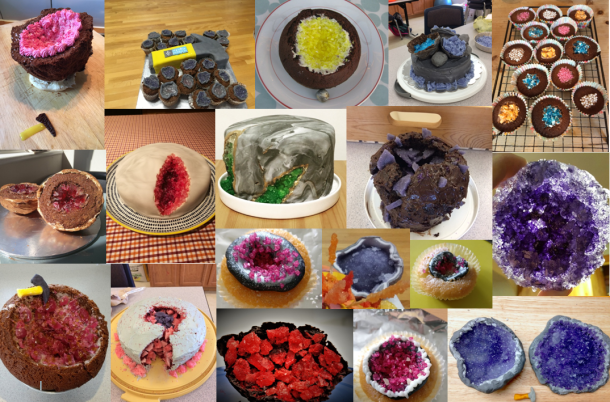 80 points: The Great Wave off Kanagawa

It may not have produced the biggest crop of entries, but I think this one might be my favourite of this year’s challenges.

We had no idea how you were going to approach it, and we had the full range, from two beautiful iced depictions:

Team N (by me this time!) Then great wave [in run-out icing] #geobakeoff pic.twitter.com/zwTJ7eirVO

A shortbread and icing interpretation of the great wave off Kanagawa by Hokusai! @geolsoc #geobakeoff #tsunami #baking pic.twitter.com/lVyxtJaQ8u

and a full 3D interpretation which survived all the way into the office for the Coal Authority’s bakeoff!

Entry no 2: The Great Wave off Kanagawa. It even survived the trip to work! @geolsoc #geobakeoff pic.twitter.com/0S7GXffgxb

Our winner for this category is Deborah Thomas, who created this amazing feat for the Wardell Armstrong bakeoff: 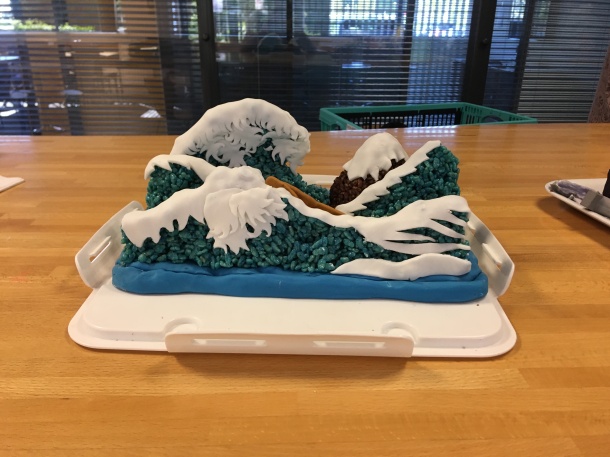 The Great Waves in full: 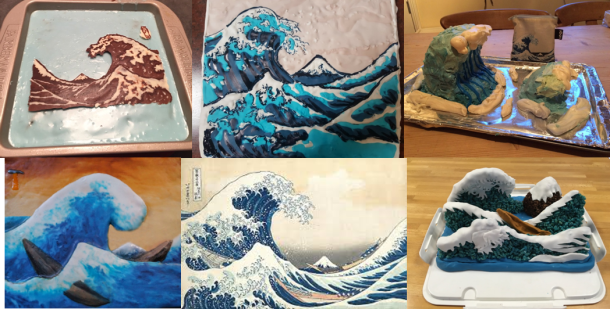 We gave you a choice here, and it’s pretty clear what the geobaking community thinks of the NHM’s recent dinosaur to whale switchover in its entrance hall – not a one of you took the whale option! A most scientific and conclusive poll, we feel.

This was also a popular category for your entries into our 2017 Year of Risk best geobaking fail award category – a couple of self described failures appear here.

Our pick for this category wins both – because, although yes, technically it’s sort of a fail, it’s gloriously done, and it made us smile…

Here are all your dippy entries! 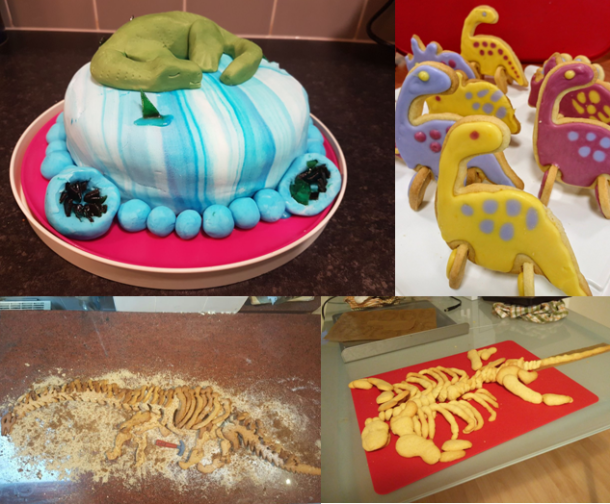 Controversially, we veered away from the traditional Jurassic Park themed 100 point challenge this year – and we were not disappointed by the outcome! Lots of you put your construction abilities to the test to create the ancient city of Petra. There was marzipan, there was gingerbread, there were tiny handcrafted Sean Connerys (Conneries?) and biscuit camels and lego people, and we loved it all.

We particularly enjoyed Alex, Debbie and Karen’s offering, which included a cast of characters from Indiana Jones and the Last Crusade, including details right down to Harrison Ford’s whip (we’re slightly concerned Harrison may not be wearing trousers, however…?) 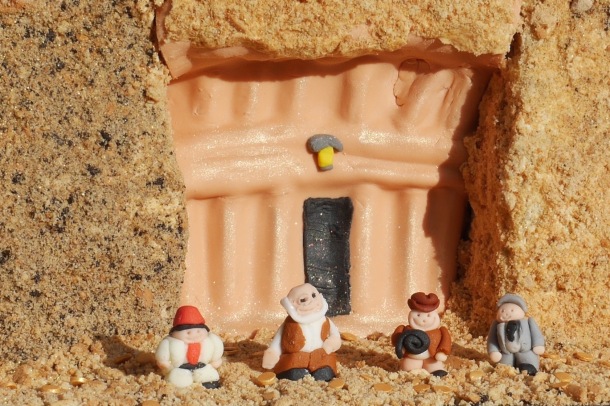 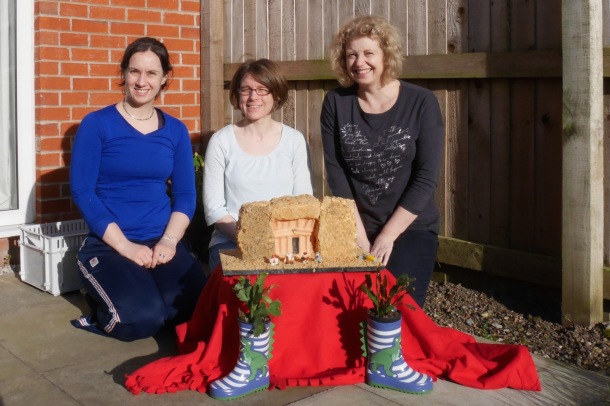 …as well as Alex Russell’s creative use of wafer rolls for the iCRAG bakeoff:

And Natasha Stephen offered us a 360 degree tour of her fabulous spiced victoria sponge with blackberry Petra:

But our favourite Petra came from Tracey Radford and son, combining cake, icing and decoration for a spectacular result!

Well done to everyone who took on the 100 point challenge: 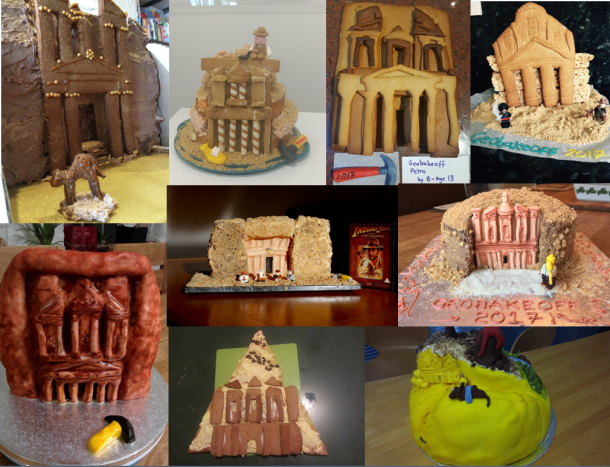 As always, this year’s bakeoff has been near impossible to judge – and we apologise profusely if we overlooked any entries!

Huge thanks, as ever, to everyone who threw themselves enthusiastically at our ridiculous challenges – you are all winners, and deserve many baking accolades.

Before we award the aprons, we want to thank all the companies who clubbed together to hold their own geobakeoffs, many raising money for charity along the way – it’s always great to see the geobakeoff taking on a life of its own! The iCRAG centre held their own awards ceremony – congratulations to the winner, Deirdre Walsh!

Big congrats to @deirdreannwalsh on winning the iCRAG heat of @geolsoc #geobakeoff for the second year in a row. A worthy winner! pic.twitter.com/g4VrQYll5u

They also awarded something called ‘the Golden Broccoli’ – we’re not entirely sure what that means, but congratulations to Cole Guo and Mudasar Saqab for winning it!

Finally, the winners of our #geobakeoff Golden Broccoli award for, em, well, you know what we mean, are Cole Guo and Mudasar Saqab! @geolsoc pic.twitter.com/0Iv8E3QlyJ

A shout out also to the Envireau Water team, who not only contributed some fabulous entries, but managed to bring the geobakeoff to the attention of none other than former Great British Bakeoff (some other slightly inferior national baking competition, we are told) contestant Luis!

They also created a storyboard of their day of baking – looks like an excellent time was had.

A story board of our busy day baking our entry for #geobakeoff @geolsoc. The Door to Hell! Behind-the-scenes footage coming soon! pic.twitter.com/IbPqFBRH7i

Right, onto the prizes…!

Lots of contenders for our young baker award this year – the winner is 16 year old Peter, who completed a magnificent four of the challenges! We especially liked Mordor, complete with set dressing…

And here are Peter’s entries in full! 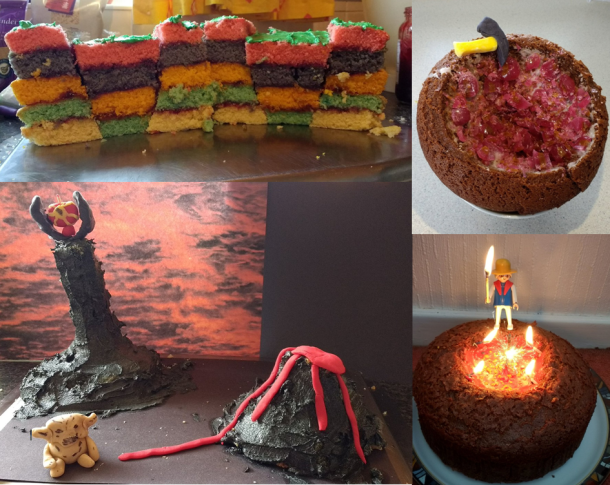 Awarded for achieving the most points, this is always a fiercely contested award. Hannah Moss Davies came close, with a magnificent 370 points – but once again the winner is Liz Laycock and her team of house raptors, who completed every challenge for the full 560 points!

Here they are in full – including that stunning Mordor tower…

So technically this is for the most accurate geological representation, but we’re bending the rules slightly here with a broad definition of ‘geological’ – the award goes to Deborah Thomas for her Great Wave off Kanagawa rice crispie creation – such a creative interpretation of the brief!

The prize for the best overall bake is always a tough decision, and this year, as ever, featured many contenders!

Our winner, for not only baking a beautiful creation, but one that’s amazingly close to the real thing, is Hannah Moss Davies’ incredible Grand Prismatic Spring!

And that’s it, for another year! WELL DONE to all our magnificent geobakers, and we hope to see you again next time!