Please note, since time of posting (April 1st, 2017), further information about the fossils has been uncovered, and may be read here 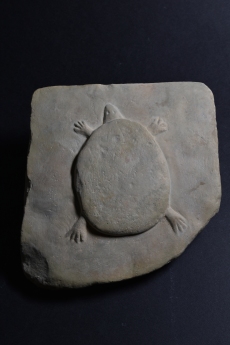 A treasure trove of exceptionally preserved fossils has been discovered in Würzburg, Germany. The finds, which include perfectly preserved specimens of birds, insects and plants, have already been dubbed the ‘Lügensteine formation’, and may overturn accepted theories as to how fossils are created.

Palaeontologist Dr Johann Beringer of the University of Wurzburg, who is leading the research, said ‘the figures expressed on these stones, especially those of insects, are so exactly fitted to the dimensions of the stones that one would swear they are the work of a very meticulous sculptor.’

Among the finds are exceptionally rare examples of soft bodied preservation, such as complete specimens of slugs, spider webs and insect wings, as well as even rarer finds, such as the only known examples of fossilised letters representing Hebrew script. 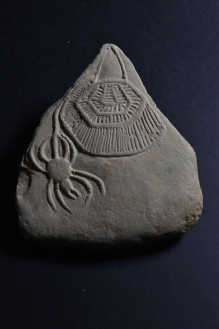 An extraordinary example of a fossilised spider web, alongside its maker

According to Dr Beringer, they cast new light on how fossil preservation takes place, overturning accepted theories such as spontaneous formation through the plastic power of the Earth’s salts, or vapours from the sea dispersing ‘seed’ from marine organisms. Instead, he argues, the impressions are caused by the action of light, creating images on stone just as it forms an image in the pupil of the eye.

This process, argues Beringer, accounts for the extraordinary specimens of fossilised words – formed, he suggests, by light reflecting from the headstones of a nearby ancient Jewish cemetery.

The fossils, says Beringer, represent ‘all the kingdoms of Nature…small birds with wings either spread or folded, butterflies, pearls and small coins, beetles in flight and at rest, bees and wasps, hornets, flies, tortoises from the sea and stream, fishes of all sorts…clear depictions of the sun and the moon, of stars, and comets with fiery tails. And lastly…magnificent tablets engraved in Latin, Arabic and Hebrew characters.’

The specimens were discovered by three teenage amateur palaeontologists, Christian Zänger (17) and brothers Niklaus and Valentin Hehn (18 & 14), on the slopes of Mount Eivelstadt, close to the University grounds. At time of writing, none of the three were available for comment.

Since they were first uncovered, more than two thousand of the specimens have been acquired, extracted by a team of diggers.

Says Beringer; ‘These wondrous exhibits reveal the most bountiful treasure of stones in all of Germany, buried for so many centuries, and at last, thanks to my persevering efforts and investigation under a benign Providence, discovered and unearthed at no small cost and labor.’

Despite his enthusiasm over the finds, however, other experts have urged caution, casting doubts over the specimens’ provenance. Professor J Ignatz Roderick, also of the University of Wurzburg, and the Honorable Georg von Eckhart of the University’s Library, have even suggested the Lügensteine formation may be formed of carefully crafted fakes.

Professor Beringer, however, remains defiant, and intends to publish a detailed study of the Lagerstätte. In answer to his critics, who have urged him not to publish, he says, ‘The work, they say, must be supressed. Their clever efforts might have succeeded, had not my vigilance, thanks to God, discovered the deceit and throttled it at birth.’

A selection of the extraordinary fossils on display at the Geological Society of London.