Let me set out my stall straight away. Anthropogenic climate change is the greatest threat to our society and to the natural world. Notwithstanding all the backslapping and hyperbole that followed the Paris Climate Agreement in 2015, the chances of keeping the global average temperature rise (since pre-industrial times) below the 2°C dangerous climate change guardrail, remains highly unlikely. Last year was the hottest on record, with the temperature already 1.2°C above pre-industrial.

Without some serious slashing of greenhouse gas emissions, we could be on track for a 4°C global average temperature rise by the century’s end, if not higher. We know what the bottom line is too. If we burn all, or nearly all, of the world’s fossil fuel reserves, we will hike the planet’s temperature by a staggering 16°C, bringing the global average to 30°C. Physiologically, humans cannot survive under such conditions, so this worst of worst cases would see a devastating culling of the population.

Assuming, however, that we are not – collectively – stupid enough to allow this to happen, and ultimately take measures that see, first emissions, and later carbon dioxide levels in the atmosphere, falling, what next? Should we aim to keep atmospheric carbon dioxide concentrations at a particular level, and if so, what should it be?

It is established fact that we are in an interglacial and orbital mechanics dictate that the current Ice Age is not yet over, so that at some point in the future the glaciers will advance once more from their polar fastnesses – if we let them.

For the moment, avoiding frying is the overriding priority, but ultimately most of us probably don’t wish to see our world plunged once again into icehouse conditions. Some might say that it is early days for such a debate, but perhaps it is time to give some thought to keeping carbon dioxide concentrations in the atmosphere at a level low enough to prevent overheating, but high enough to stall the return of the ice.

Records of atmospheric CO2 levels in previous interglacials reveal that the pre-industrial concentration of around 280ppm would not be sufficient to keep the next glacial advance at bay, so what would? To stave off warming capable of promoting significant ice sheet melting and sea level rise, it has been proposed that atmospheric CO2 concentrations should be kept at or below 350ppm, but how high should they be if we wish to stave off a future return of the ice? As far as I am aware, the jury on this is out, if it has ever been in that is. Of course it may be that we have already gone too far down the road of warming, and a number of studies suggest that anthropogenic emissions could already have postponed the next glacial advance for 100,000 years or more. Be this as it may, it would seem prudent to establish as soon as possible the window of ‘safe’ carbon dioxide concentrations capable of maintaining a ‘goldilocks’ global climate – neither too hot, nor too cold.

Of course, there are other issues too. Not least the ethics of intentionally engineering our planet’s climate in opposition to its natural cycles. Postponing the next Ice Age may be good for us, but as just one of a trillion or more other species on the planet can we justify making the call? Secondly, there is the question of how we would go about stabilising atmospheric CO2 concentrations at a ‘safe’ level. Clearly, with more than 200 nations and countless industries having a vested interest, establishing the necessary mechanisms – both physical and political – would be far from straightforward. Thirdly, who would would take the decision to spike future cooling? There are bound to be objections to limiting cooling in the same way that there have been challenges to the various engineering schemes proposed to counteract warming. Should these individuals and groups have a voice? What if a substantial number of nations, maybe those whose climates might be positively ameliorated in a glacial world, objected to any interference with future glacial cycles? Would other, perhaps more powerful, countries with alternate interests go ahead anyway, and what would the consequences of such a policy dichotomy be? 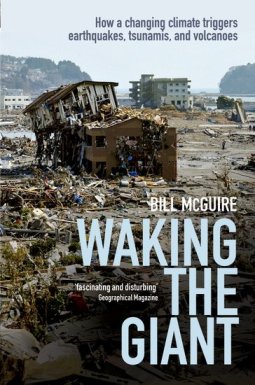 If you have read this far, I am pretty certain that many of you will have decided that, at this stage, such discussions must be considered purely academic, and perhaps you are right. But we have to start somewhere. We all hope that a time will come – hopefully sooner rather than later – when we are in the happy position of emissions falling rapidly and prospects for hothouse Earth fast diminishing. Then the question of whether we continue to allow greenhouse gas concentrations in the atmosphere to continue to drop, or intervene at a particular level, will move quickly to the top of the political agenda. Given the immensity of the issue, it can’t do any harm if we get our thinking caps on early.

Listen to a podcast with Bill McGuire on the geological effects of climate change: