Everyone loves a good dinosaur. For many, their first fossil discovery or interaction with a museum exhibit instils a lifelong passion for understanding the history and mysteries of our planet.

But one particular dinosaur (or at least a skeletal replica) has made a bigger impact on the British national consciousness than any other; the Natural History Museum’s ‘Dippy’. 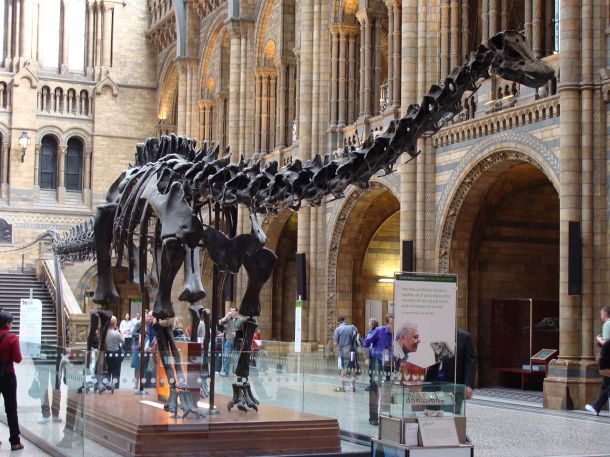 Standing in the spectacular entrance hall for almost forty years, this particular gentle giant has amazed young and old alike. When I first met Dippy as a young lad, around 1991, I had already found my first fossil on the Jurassic Coast and decided that I wanted to become a palaeontologist. In the end I settled for being a ‘simple’ geologist.

Seeing the announcement that Dippy is to be retired from active duty was sad – but at least now he has the chance to amaze a whole new spectrum of people on a nation wide tour. Dippy’s replacement, a 25 metre long blue whale skeleton, doesn’t look too shoddy either!

Some twenty years after first meeting Dippy, when I finally became a professional geologist, I joined one of the UK’s biggest industries – oil and gas exploration and production.

Although sometimes seen in a negative light, the British petroleum industry has achieved great things over the past fifty years, providing energy security to the nation and contributing to huge technological advances. Whatever your view, the industry is a big contributor to the UK economy and job market. Before the latest downturn, an estimated 450,000 people in the UK were employed by oil and gas companies or their suppliers.

Within the Geological Society, the Petroleum Group aims to provide ongoing education, networking and research opportunities to the geologists employed by oil companies and to academics involved in related activities. This usually takes the form of professional conferences and publications, but once a year the group’s affiliates and members gather for an annual dinner. This dinner happens to be in the entrance hall of the Natural History Museum, right under the gaze of Dippy.

Having a table next to this pre-historic legend tends to make grown professionals giggle with excitement. Two years ago, my own manager returned to the office in joyful excitement at having eaten under Dippy’s skinny posterior, recounting searching his food in case a coprolite happened to have fallen into his soup.

It won’t have escaped your attention that the petroleum industry worldwide has had an annus horribilis. Current job loss estimates globally are around 400,000, approximately 65,000 in the UK alone. This has been, and continues to be, a very tough time for everyone. As such, we hope companies, or individuals, can still join us for this year’s Petroleum Group ‘Last Dinosaur Dinner’ on the 23rd June.

As well as being a last chance to ‘dine with a dino’, the event includes an important fundraising raffle for ‘Rockwatch’, and recognition of upcoming and established talent in the Petroleum Group awards ceremony.

I’d like to finish with a personal thanks to Dippy (and the Natural History Museum) for inspiring me and countless others to follow a fantastic and rewarding career. Although Dippy will be gone, I’m sure we will still have a whale of a time at the 2017 dinner!