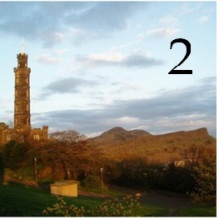 Welcome to the advent calendar ‘On this Day…’ mini-series!

I’m going to focus on historical geohazard events, starting with the ‘December Giant’ Sinkhole, which formed on December 2nd, 1972 near Calera in Shelby County, Alabama: also known as the ‘Golly Hole’.

This mother of a sinkhole measured 425 feet in diameter (more than 12 double decker buses back-to-back!) and 150 feet deep. On the night of the collapse, it was reported that a local resident heard ‘a roaring noise’, ‘the sound of breaking trees’ and ‘the shaking of his house’! The huge crater was found two days later by some hunters, whose first word at finding the epic hole was ‘Golly’ – hence the ‘Golly Hole’.

The ‘December Giant’ or ‘Golly Hole’ sinkhole that formed on the night of December 2, 1972. Image Credit – USGS.

The crater is now occupied by a lake, and has trees and bushes growing inside it. There is a chance that sometime, in the not too distant future, the crater will join with a nearby sinkhole around 150 yards away (see below image). If that happens, the two could get bigger and join to form an even larger crater!

Why Alabama, and how was the sinkhole formed?

Alabama is no stranger to sinkholes, with the second highest number within any US State after Florida. This is due to the widespread presence of limestones and soluble carbonate rocks. The landscape is pitted with sinkholes, springs and cave openings forming the Karst topography. The ‘Newsome Sinks’ area in Morgan County, Alabama has a feature of several coalescing sinkholes which form the longest Karst topographic features in the state, over 4 miles long! 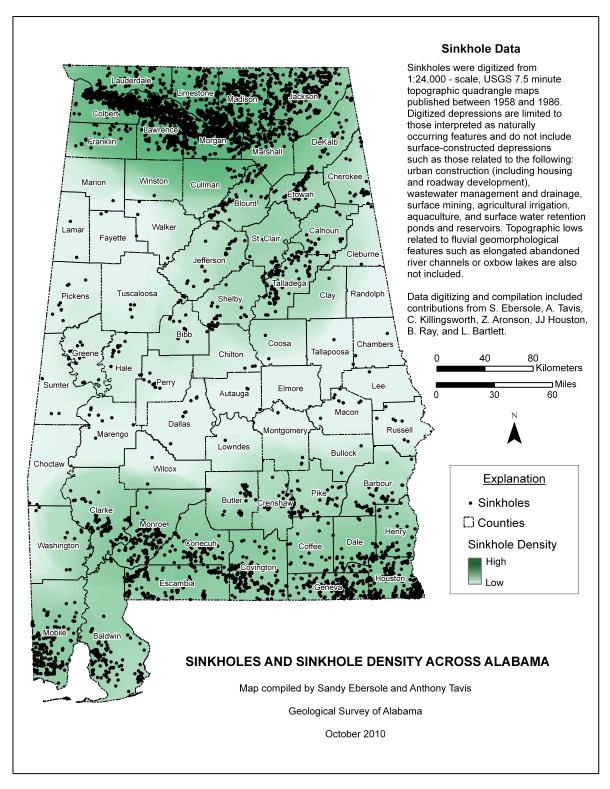 The area where the ‘December Giant’ formed has had a history of sinkhole development, due to the prevalence of soft limestones. Many of them are located in what’s known as the ‘dry valley’ which is underlain by deeply weathered Cambrian dolomites. They can occur when the roofs of underground limestone caverns suddenly collapse.

In a news article published some months later (which you can see in all its glorious vintage here, in which the sinkhole story appears in ‘The Tuscaloosa News’ next to adverts for   ‘Puritan’ clothing’s ‘New 2-piece’ and the ‘Natural Woman’ wig!), John G. Newton, a USGS hydrologist, could not confirm the exact cause of the sinkhole, but stated that collapse can be triggered by a number of factors including changes in the water table, increase in precipitation or runoff and overloading of the land surface. Lowering of the water table, which can be caused by humans or can happen naturally, is particularly critical and can remove the clay support that sits above the subsurface caverns which causes collapse of the clay into the underlying cavern. Sometimes this happens incrementally and other times its more dramatic and collapse is instantaneous, as seen at the ‘December Giant’ sinkhole.

For our next On This Day, we’re travelling back to 1631, for an explosive eruption…

Don’t forget, we’re running a competition throughout the advent season – leave a comment below identifying which of our 100geosites is pictured in the window to be in with a chance of winning the geoadvent prize…

Yesterday’s window was correctly identified as High Cup Nick in Cumbria by several of you – but Clark Fenton got there first!