In the first of our Climate Week blogs, we look at Shen Kuo, the 11th century Chinese scientist and statesman who might be considered the very first palaeoclimatologist… 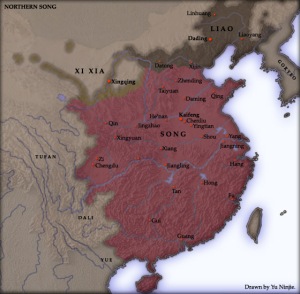 Boundaries of the Northern Song Dynasty, the Liao Dynasty, and the Western Xia.

In Yanzhou, in around 1080, a large landslip occured on the banks of a nearby river.  The entire riverbank collapsed, revealing a small forest of petrified bamboo shoots that had previously been buried deep below the earth.  Though they had both roots and trunks, they were completely fossilised, their presence so startling that senior members of the military of the Song Dynasty were informed.

At that time, Yanzhou was an important strategic town.  The Song Dynasty held it and were involved in a protracted series of wars against the Tanguts of Western Xiu.  Entrusted with the defence of Yanzhou by Emperor Shenzong of the Song was Shen Kuo (沈括).

Shen Kuo had enjoyed a meteoric rise through the ranks of the Song government.  His successes included the surveying and dredging of the Bian Canal, followed by the even bigger success of discovering that silt gathered from the canal just happened to be a really good fertilizer.

In the ongoing battle with the Tanguts, Shen Kuo had been successful in defending Yanzhou while at the same time capturing several fortified towns held by the Tanguts.  Everything was looking rosy for Shen Kuo.  However the Emperor, as Emperors do, trusted a different military officer who was contemptuous of Shen Kuo’s strategic fortifications, instead expelling him from the citadel at Yanzhou so he could take no credit for the inevitable victory.

Victory is never inevitable.  The poor fortifications of the Emperor’s chosen general were overwhelmed by the rampaging Tanguts and 60,000 were killed in the devastation.  The government were ousted in favour of new people with new ideas who nevertheless needed a scapegoat for the disaster.  Shen Kuo seemed the ideal candidate for that role.  He was put under house arrest for six years and thereafter retired to his garden estate in the country, ‘Dream Brook’.  Relieved of his political and military responsibilities, he had time for more scholarly activities. He took up his brush and though back to that landslide and the stone bamboo forest. 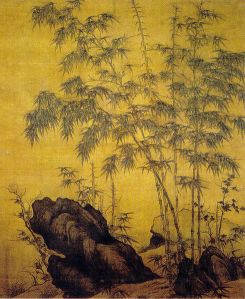 In the Köppen climate classification, Yanzhou (now Yan’an) sits at the boundary between a humid continental climate type (Dwa) and a cold steppe climate (BSk).  Bamboo tends to prefer cold, poorly lit and very damp conditions.  In 1080 there had been no bamboo growing anywhere near Yanzhou in living memory.  Shen Kuo knew this and it had been puzzling him.  He wrote about it in his major work, “Dream Pool Essays” (夢溪筆談), named for his house.  He concluded that at some point in ancient times the conditions at Yanzhou must have been different enough that a bamboo forest could grow there.  It must have been a very long time ago, time enough for the bamboo to petrify.  Therefore the climate was not a static thing.  It could change over long periods of time.  Shen Kuo had just become the world’s first palaeoclimatologist.

He has many other claims to fame, including hypotheses of sedimentary deposition, soil erosion and land formation based on the observation of marine fossils in the geological strata of mountains.  That, and then inventions of the magnetic compass needle for navigational purposes and a predecessor to the Bessemer process. He is the source of our knowledge concerning the invention of movable type printing, as well the creator of a 1:900,000 scale topographic atlas of the Song territories and surrounding areas together with a raised relief map, documenting hundreds of minerals and their uses. He improved several scientific instruments, experimented with pinhole cameras and established the exact position of the Pole Star and discovered True North.

He has a lot of competition, but Shen Kuo is possibly China’s greatest scientist.

Alas, Shen Kuo met a tragic end.  After the death of his second wife, who had previously made a concerted attempt to pull off his beard, he fell into a deep depression.  He tried to kill himself by jumping in the Yangtze.  He failed, but did die alone less than a year later.  His writings fared little better.  Much of his work was destroyed by subsequent Emperors, keen on doing all they could to end the memory of humiliating military defeats and annoying political opponents.  Dream Pool Essays survived, but little else did.  His ideas, climatological and otherwise were ignored rather than studied by subsequent generations.

Shen Kuo’s Mengxi garden estate has now been restored, as has his tomb. In 1979, the Chinese Academy of Sciences honoured his memory by naming an asteroid after him.