Part two of a guest blog from Layik Hama at the University of Leeds.

Layik is undertaking a research project on finding techniques that will lead to the development of an app for use in the field. You can read part 1 of his blog here.

Novice geologists participating in introductory level field work are faced with various different field based problems and issues. This is true of the many sub-disciplines of geology but for the purpose of this post and my research the focus will be on fieldwork for structural geology students.

Many problems experienced by beginner fieldwork students arise from a lack of spatial skills and the difficulty in conceptualizing space. An overview of the issues related to spatial skills has been outlined by Liben and Titus (2012). They also cover spatial issues 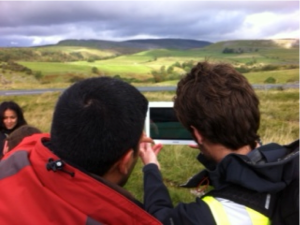 experienced by professional geologists in the field such as reading, understanding and interpreting topographic and geological maps.  They attribute the difficulties to three factors: the spatial nature of geological data and representations, the spatial skills of novice geologists and thirdly educators failing to recognize the second factor.

Another way of looking at the issues is to study the thought process of the students during the field data collection process. The process of how students integrate observations into a 3D conceptual model has been studied by Kastens, Agrawal et al. 2009. Other researchers like Dr. S.J. Whitmeyer and his colleagues identify issues faced by students and have been using virtual worlds such as Google Earth as a solution. They have defined three “conceptual difficulties” (Whitmeyer, Feely et al. 2009):

To cope with the scope of the research the third point is not considered. The second issue covers the difficulty in dealing with orders of magnitude of geological data. The first and the second point can be broken down to the following points:

The casework study area for this research is Ingleton in North Yorkshire, England. This location was chosen because it is a “straightforward horizontal example” of an introductory fieldwork location and a popular choice for introductory geology student trips. The aim and objectives of this trip as well as the tasks carried out in the field were studied and compared with the issues in the literature.

Staff at the school of Earth and Environment at the University of Leeds were interviewed multiple times in addition to discussion sessions with co-supervising geologist Dr Douglas Paton of the same department. Students were also interviewed about their difficulties in the field.

A step-by-step systematic analysis of typical tasks carried out by students in the field brings these issues into focus:

This could be labelled as “an easy task” for many of the readers of this blog.  However, researchers state that this is a cognitive task which is never mastered by even professionals (Kastens, Van Esselstyn et al. 1996). Replicating “a cross on the 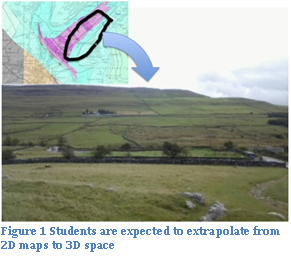 map” digitally to indicate location is only the start of the issue.

Researchers state that adults will have difficulty in perceiving strike and dip if they do not understand the concept of horizontality (Kastens 2009; Liben and Titus 2012). During interviews with staff and students, it was indicated that strike and dip and contour lines are used to validate or invalidate geological models.

3.  Visualization and extrapolation of 2D structures into the third dimension 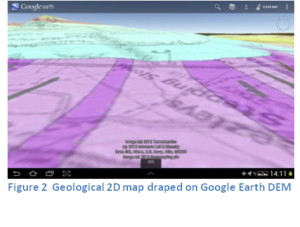 To address one or more of these issues, and as the first logical step, current free and available tablet application functionality was evaluated.  This initial evaluation was carried out in October 2012 on two field trips to Ingleton using between participants method (different groups using different tools).

The conclusions from the initial evaluation can be summarized as follows:

Kastens, K. A. (2009). “Even Darwin struggled with Dip and Strike.”   Retrieved 31st March, 2013, from http://serc.carleton.edu/earthandmind/posts/darwindipstrike.html.

Liben, L. S. and S. J. Titus (2012). “The importance of spatial thinking for geoscience education: Insights from the crossroads of geoscience and cognitive science.” Geological Society of America Special Papers 486: 51-70.