Out in the field 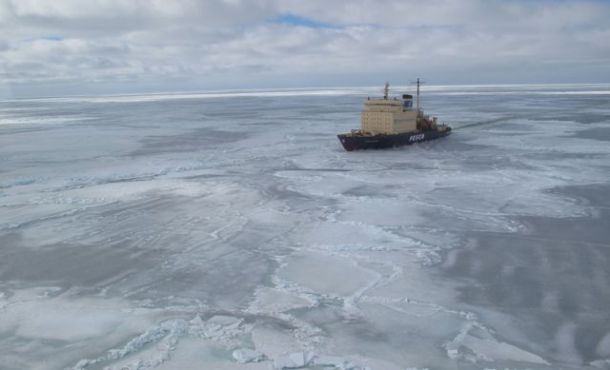 Our captivity in the ice didn’t last as long as we expected. After an hour or so, just as we were beginning to discuss who to eat first, we were released from the ice. We pressed on south through this vast frozen plain, and on Saturday morning passed 73o south. It was a grey misty morning, with snow falling gently as perfect hexagonal crystals. We were in nine-tenths pack, but it was thin. As we moved into late afternoon, the skies cleared and the continent appeared on the western horizon. Closest to us was Coulman Island and behind it, faintly seen, was 3500 m Mount Murchison, named after our former president.

By Saturday evening, we had been breaking through the pack ice for three days, and not touched land for five, but soon we hope to make a landing on Frankin Island at 76oS, if the pack permits. It will be good to see some rocks.

One thought on “Land ahoy!”

The Geological Society is made up of over 12,000 geologists from over 80 countries worldwide. Shared views, differing opinions, debate, discussion and dialogue. Join now and get involved in shaping the future of Earth science
This large lithographic plate, which we have digitally stitched together, is from ‘The Mastodon giganteus of North America’ by J.C. Warren (1852). The other images show the title page of the book and a plate with examples of complete Mastodon skeletons which had been found.
If you are feeling that the Geological Society isn’t for you, maybe think again. If you study, work or are interested in any of the elements of Earth science, then we have something to offer you. Come and take a look.
Check out our brand new #YearOfSpace posters!
A paper published this week reports on 18 new Theropod and Sauropod footprints in the Bemaraha Formation, Madagascar, forming an important record from the Middle Jurassic strata.
Do you work in Earth sciences? Join the Geological Society to progress your career at every level whether a student or an experienced geologist