Earth Science Week is here for 2019 and we are delighted to announce the winners of this year’s ‘Geoscience if for everyone’ photography competition!

This year, for the first time ever, asked entrants to share their photographs of geoscience from all over the world. We received hundreds of amazing entries, and selecting twelve winners to feature in this years’ Earth Science Week calendar and go on display at Burlington House was no mean feat!

Thank you so much to all the photographers that entered, and we look forward to welcoming you to Burlington House to see the winning photographs anytime during opening hours. The 2020 calendars will be on sale from the end of this week and are available to pre-order now from the Geological Society Bookshop. 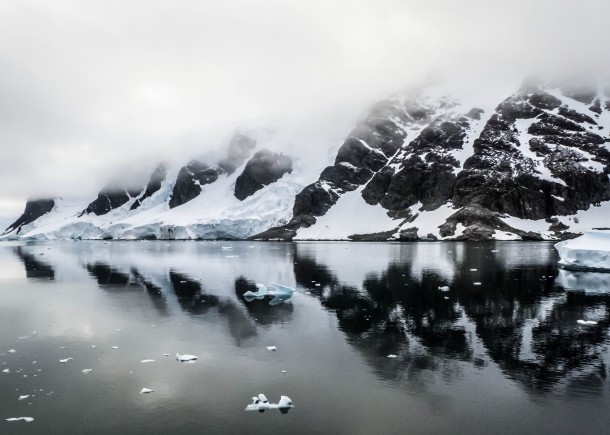 “This photo was taken following the footsteps of other Belgian explorers after which ‘The Gerlache Strait’ is named. It was an amazing privilege to witness the scale and the beauty of Antarctica first hand. The contrast between the black rocks and the white snow together with the quiet reflection made for a dramatic look.” 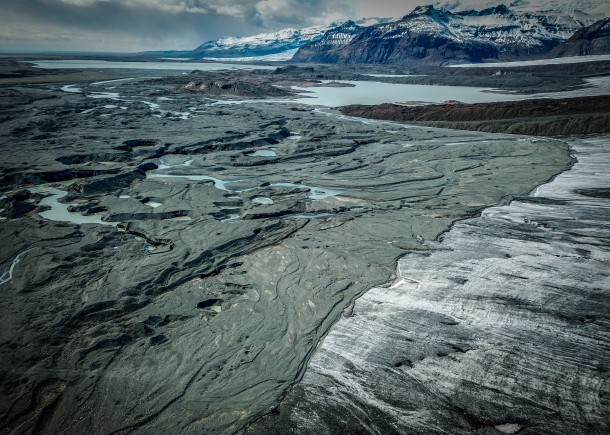 “Glacial outwash is being deposited on the snout of the Breiðamerkurjökull glacier (bottom right) from meltwater streams. As the ice melts from beneath, pits reminiscent of craters are formed. The glacier’s retreat is marked by annual terraces, marking the previous year’s accumulation of outwash and subsequent melting. A prominent brown medial moraine can be seen in the top right of the image, where ice is protected from melting by a cover of debris. The Öræfajökull stratovolcano, which last erupted in 1727, looms in the background.”

“Locals of the area told me that the colours of the rainbow mountain were only discovered in recent years after warmer temperatures have caused significant snow melt. The mountains are part of a volcanic chain that runs along the edge of the South American and Nazca tectonic plates. Years of weathering have revealed the different coloured minerals from the sedimentary layers.”

“I spent six months sailing across the south Pacific, and found this stunning natural bridge analogue on the small island of Niue. This is one of three natural arches formed from the limestone core of the island. The view itself is from a cave, surrounded by stalactites and stalagmites – a karst geomorphologist’s dream!”

“This picture was taken on the return flight after an evaluation mission during the cholera crisis in Yemen. Horizontal sedimentary layers can be seen in the upper part of the picture, while man-made terraces partly cut and partly follow the natural structure of the sedimentary rocks – a magnificent example of intelligent landscaping.” 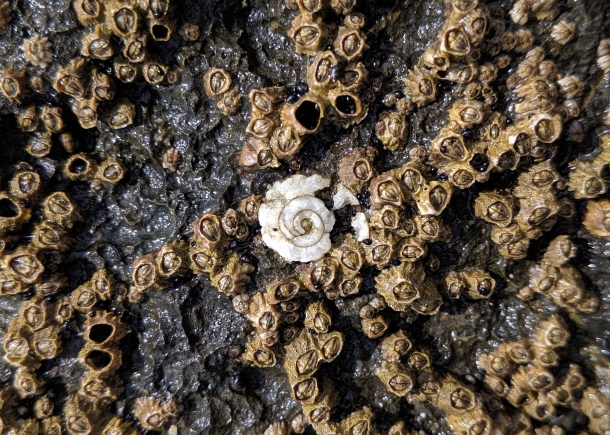 “The intertidal zone at Fanore Beach is the perfect location for the combination of fossil hunting and sea creature viewing. The diversity of living and fossil organisms on display in the intertidal zone provides ample reward for an observer with a keen eye and a creative imagination. Visualizing marine life in the present allows for a clearer picture of life in the ancient oceans that existed throughout geological time.”

‘Cutting Through the Rockies’ Ben Craven, (The Trans-Canada Highway, near Golden, Canada) 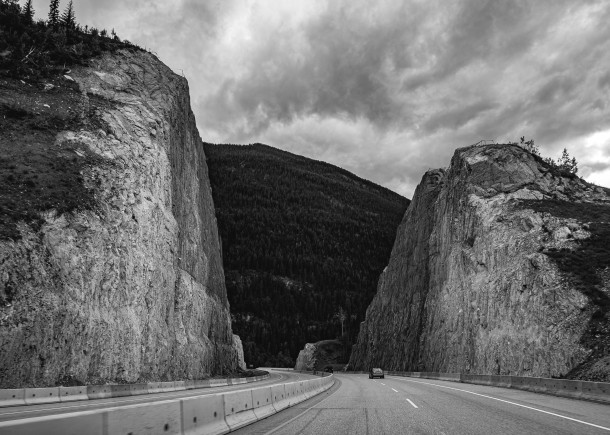 “When rocks stand in the way sometimes we must engineer our way through them. Some impressive rock bolts and nets help keep this section of road clear along the Trans-Canada Highway. This photo wast taken on a road trip to Vancouver on a stunning drive through some wonderfully complicated geology.” 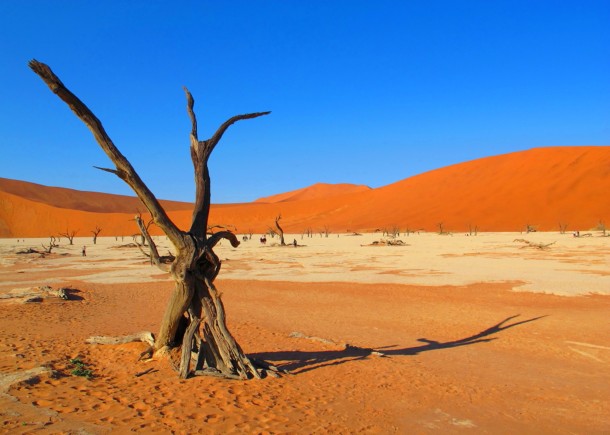 Sossusvlei is a salt and clay pan surrounded by high red sand dunes, located in the southern part of the Namib Desert. This area is characterised by tall sand dunes of vivid pink-to-orange colour, an indication of the high concentration of oxidised iron in the sands.

‘Geoscience is for Living On’, Ursula Lawrence (Isle of Noss, Scotland)

“The geology of Noss includes the Bressay Flagstone Formation which comprises interbedded sandstones and siltstones. The gently dipping beds form ledges which are ideal for the sea birds to nest on. This gannet was perfectly placed in front of one of the thicker beds and the guano trail formed a lovely curved leading line.”

“Tin, copper and various other metals have been mined in Cornwall since the bronze age.  Mining reached is heyday here in the 19th century.  The Levant Mine first appeared on a map in 1748, by 1836 over 500 people (men women and children) were employed on the site.  The workings extended for over a mile out under the sea bed.  Tin, copper and arsenic were produced from the mine which finally closed in 1930.  The mine was infamous for having a ‘man engine’ for lowering people down into the pit – this October marks the centenary of a tragic accident which killed 31 people when the man engine failed.  The mine is now a National Trust site with the only Cornish beam engine still operated by steam on its original site.” 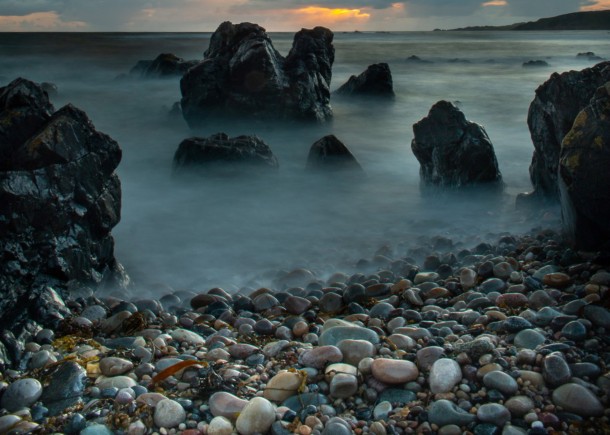 Malin Head is composed mainly of metamorphic and igneous rock formed over 400 million years ago. The Malin Head coastline is awash with a variety of pebbles that include gemstones such as opal, jasper, amethyst and topaz, to name a few. These semi-precious stones were (and still are) used to make jewellery and were set into seals in the early 19th century. (Irene Haggan, Donegal County Council)

“The upper strata of the canyon comprise the Mereenie Sandstone, a fine-grained, well-sorted, quartz sandstone with minor conglomerates representing a former inland dunefield with rivers and lakes. The age is poorly constrained, probably Silurian-Devonian, but could be as old as Late Ordovician (approx. 440 Ma). There are two sets of orthogonal, vertical joints picked out by erosion: a very well developed set trending west-northwest and a poorly developed set trending north-northeast.”

Congratulations to all twelve winning photographers, and thanks again to everyone who entered!

Check out what is on near you during Earth Science Week by taking a look at our calendar of events. Join in on Social Media using the hashtag #EarthSciWeek and show us what you are up to!