This image of Trotternish on the Isle of Skye was sent to us by Anna Saich for the 2015 Earth Science Week photo competition. 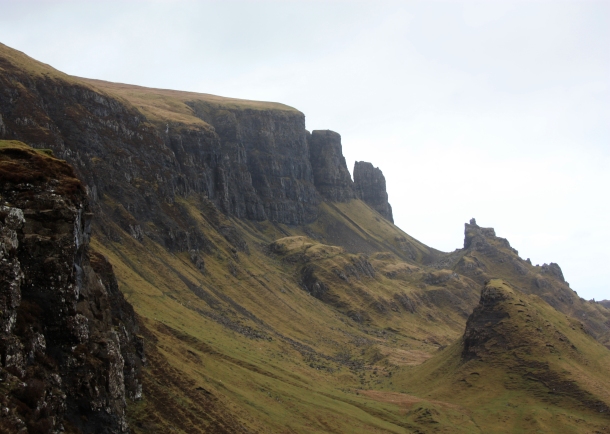 After the Cuillin Hills, Trotternish is perhaps the next most visited part of Skye. Stunning scenery at the Quirang and the Storr, post-glacial large-scale landslides, ensure that the area is well photographed. The landslide at the Quirang is the largest mass movement slide in Britain, extending over 2km in width. Geologically, the west and northern parts of Trotternish consist of Jurassic sedimentary rocks and Palaeogene lavas intruded by later Tertiary dolerite sills. Although Jurassic rocks are relatively rare elsewhere in Scotland, Skye offers the most complete sequence of Jurassic rocks in the country, with Trotternish being one of the main exposures.

The rocks at Trotternish consist of Jurassic sedimentary sequences overlain by thick Palaeogene lava flows. Dolerite sills and dykes intrude the Jurassic rocks. All the rocks dip gently to the west, creating slopes rising gently across Trotternish peninsula from west to east, with steep scarp slopes on its eastern margin. N-S trending faults are also developed along the peninsula.

The slides formed due to the overlying weight of the lava flows (a total of 24 flows, approximately 300m thick), weighing down on the weaker Jurassic sedimentary rocks. Under the pressure, the Jurassic rocks sheared along the N-S faults and huge blocks slid seawards along a rotational glide plane.

At the Quirang, five successive movements have been identified, extending over 2km from the scarp slope to the coast. Although features such as the Storr and the Quirang are currently stable, other areas remain active.