Achmelvich in Sutherland, Scotland, features in the ‘Unsung Heroes’ category of our list of 100 Great Geosites. For our 2016 photography competition, Katherine Joy sent us this striking image of the popular Achmelvich Beach. 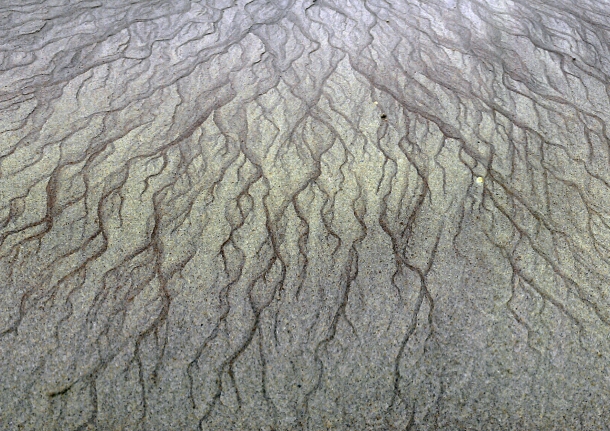 Geologist Rob Butler on the importance of Achmelvich as a geological site:

Much of the Lewisian complex along the coast of western Assynt is made up of grey gneiss derived from a range of large intrusive igneous bodies that have been extensively sheared and metamorphosed. The original igneous rocks built new continental crust, most probably as part of a volcanic island arc. This episode has been dated at about 3000 million years old – towards the end of the Archaean eon. So like other cratons, NW Scotland has a kernel of ancient crust.

Visiting outcrops in western Assynt we could as easily be walking on the cratonic hearts of the African, Indian, Canadian or Australian continents. And a great place to get an insight into the processes that have formed and reshaped the continental crust is the coast around Achmelvich, a few kilometres north of Lochinver.

Parking is possible near the youth hostel [NC 058248] but don’t be tempted down to the beach just yet. It’s better to track over the headland to a low platform overlooking Loch Roe [NC 057243].

Here there is a layered complex of banded gneisses with blobs and streaks of dark (mafic/ultramafic) material. These streaks are cross-cut with seams of coarse grained material (pegmatite) which is variably deformed too. So we can establish a history of magmatic differentiation, deformation, igneous intrusion and more deformation. This is probably all part of the earliest history of the Lewisian – the so-called Scourian, as the crust was being formed.

The headland area is made up of various types of deformed plutonic igneous rocks. Most intriguing are the blobs and balls of the dark mineral hornblende. These represent more continuous layering that has been pulled out during deformation. The layering is also folded on the scale of the narrow headland [NC 053241]. Another ultramafic layer can be traced as a discontinuous pulled-out array of pods leading inland from near a small inlet [NC 054243].

All the geology considered so far is very old, associated with and following directly on from the igneous formation of the crust. This geology is cross-cut by dark, vertical igneous intrusions, the so-called Scourie dykes. In the Achmelvich area these dykes no longer contain their original igneous minerals. Rather they have been metamorphosed and are now largely composed of hornblende (an amphibole).

A good example of can be found on the northern shore of Loch Roe [NC 059243]. Here a Scourie dyke, just 1m wide cross-cuts the adjacent gneisses and their structures. So the dykes must post-date the gneisses and these structures. If you follow it inland you can show that the dyke increases in width to almost 15m. The trend of the dyke is typical for this suite, NW-SE. The dykes are found throughout the Lewisian and have yielded two groups of radiometric ages, one around 2400 million years and another at 1990 million years.

Another Scourie dyke crops out on the on the SE side of Achmelvich Bay, close to the end of the road [NC 055248]. If the blown sand cover permits you can see a 3m dyke cross-cutting gneisses. However, this is worth a closer look. The margins of the dyke are deformed, as indicated by the streaked out hornblende crystals. On the NE margin there are minor injections of a very fine-grained material. This is pseudotachylite, a frozen frictional melt created during faulting. These features indicate that all has not been peaceful since the formation of the Scourian gneisses.

The northern side of Achmelvich bay contains a transect into a belt of deformation. This has been mapped as a nearly linear feature across Assynt – called the Canisp Shear Zone. This structure is a smaller version of a major belt of deformation that has reworked the Scourian crust and accreted other tracts of gneisses. The general name for this deformation event is the Laxfordian – dated at about 1730 million years old.

The Canisp Shear Zone is only a few hundred metres wide. But while it might not represent a zone of major displacement, the rocks caught up by it show extensive deformation. Scourie dykes, which outside the shear zone are generally discordant to the gneisses on their margins, are smeared out and stretched. Both can be folded by very tight structures. Gneisses are more finely grained and pick up an intense linear fabric that plunges towards SE. The SW edge of the shear zone is found in a small cove [NC 057256] and there are great outcrops of all the deformation features along the coast from here.

So in the couple of kilometres of coastal section at Achmelvich you can investigate a history of crustal formation and deformation that spans over 1200 million years. And all this history predates the Torridonian sediments that form the nearby hills of Suilven, Canisp and Quinag.