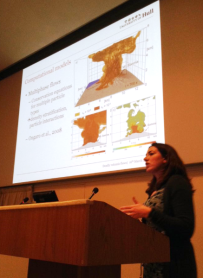 Dr Rebecca Williams of the University of Hull

As everyone of course knows, Dante’s Peak is the greatest of all geological disaster movies (fight with me in the comments.) So I was thrilled last month when University of Hull volcanologist Dr Rebecca Williams not only delivered a brilliant London Lecture, but confirmed that the film is, at least pyroclastically speaking, more or less accurate.

Pyroclastic density currents are flows of hot gas, ash and rocks that travel down the sides of a volcano during explosive eruptions. The gas reaches temperatures of around 1000 degrees celsius, and flows can reach speeds of up to around 400 miles per hour. They typically travel around 20 km, although, Dr Williams says, ‘some in the geological record have been known to travel up to 100 km. So they can take you unawares, very long distances from the volcano. 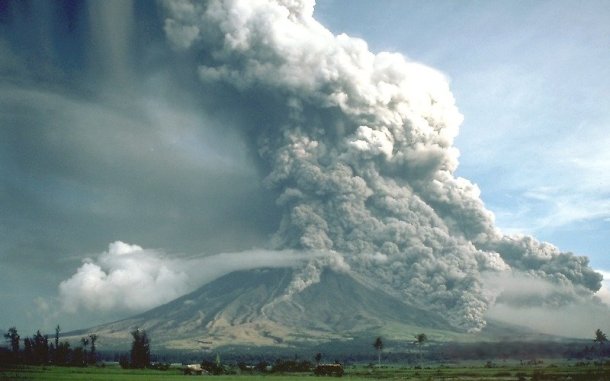 Pyroclastic flows sweep down the flanks of Mayon Volcano, Philippines, in 1984 (Wikipedia)

Usually occurring in explosive eruptions, pyroclastic density currents have claimed the lives of an estimated 92,000 people since c. 1600AD – about half of all deaths attributed to volcanic eruptions.

Dr Williams’ work involves interpreting pyroclastic deposits in the field, as well as creating analogue models to try to understand how they behave.

Rebecca Williams talking about pyroclastic flows and her research on our podcast:

There isn’t a lot of hope for anyone who finds themselves in the path of a pyroclastic density current – but there is at least one tale of survival.

The man who lived through doomsday 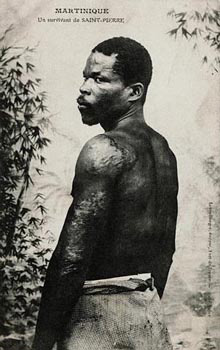 Postcard of Survivor of the Mount Pelee Eruption (Wikipedia)

Louis-Auguste Cyparis, later known on the circus touring circuit as ‘the man who lived through Doomsday’, was locked up in Saint-Pierre, Martinique, on the night of 7 May 1902. His crime varies with the telling – ranging from drunkenness, violence, murder or the ravings of a man with a premonition of disaster.

His stone cell was partially underground and bomb-proof. Which was lucky for him, because at 7.52 the following morning Mount Pelée erupted in a devastating rush of pyroclastic density currents.

An estimated 30,000-40,000 people were killed. Cyparis suffered severe burns from the ash and hot air which entered his cell, but survived, and was rescued four days after the eruption (and subsequently pardoned of his crime.) 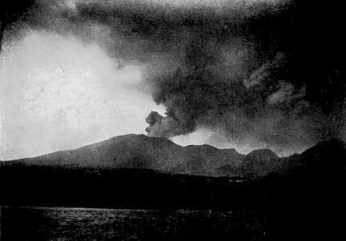 Cyparis went on to achieve the status of a minor celebrity for his remarkable escape, touring with Barnum & Bailey’s circus recounting his experience, before dying of natural causes in 1929.

Saint-Pierre has never fully recovered from the eruption – its 30,000 strong population prior to the events of 1902 now stands at around 4,500.

City of Naples with Mount Vesuvius at sunset (Wikipedia)

Of course, the most famous pyroclastic flow is probably that which devastated the towns of Pompeii and Herculaneum in AD79, simultaneously devastating and preserving them for future archaeologists to uncover.

Mount Vesuvius, the volcano responsible for the destruction, remains active, looming over the densely packed 3 million strong population of Naples, nestled around its slopes. 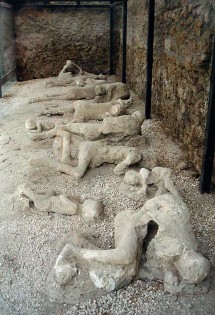 ‘Garden of the fugitives’ – plaster casts of victims at Pompeii

Of the 79AD eruption, only the eyewitness account of Pliny the Younger remains – who wrote of the pyroclastic flow;

“…its general appearance can best be expressed as being like an umbrella pine, for it rose to a great height on a sort of trunk and then split off into branches, I imagine because it was thrust upwards by the first blast and then left unsupported as the pressure subsided, or else it was borne down by its own weight so that it spread out and gradually dispersed. In places it looked white, elsewhere blotched and dirty, according to the amount of soil and ashes it carried with it.”

Not all pyroclastic density flows are on such a dramatic scale, but they do continue to take place around the world – which is why Dr Williams’ research is so important.