It was first published just eight years after the foundation of the Geological Society in 1807.  A copy of the map has hung on the wall of the Society since at least 1828, with only a few short breaks for preservation and loan to other organisations, such as its trip to Tate Britain in 2012.  In fact the Society currently owns four copies of William Smith’s map, including the copy that was recently ‘rediscovered‘ this year, while a fifth, early copy of the map has vanished from the Society’s stores.  Smith’s map continues fascinate members of the Society as it has done from the very early days, although the relationship between the Map and the Society has not always been so reverential. 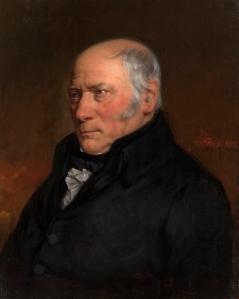 Before William Smith published his map, he needed the money to do so.  The base map was engraved by John Cary, a noted cartographer and atlas maker.  Each of the fifteen sheets with geological markings had its own metal plate, which was inked and pressed on paper.  The image produced then had be hand-coloured by water-colourists employed by Cary.  This was not just a matter of painting by numbers as Smith required each colour to be graded from thick to faint demonstrating the dip of each strata across the country.  All of this cost a lot of money and Smith was not a rich man.  To raise the funds he needed, he asked for subscriptions to his map in advance of publication.  Each subscribers would receive a copy when the map was complete.  This was a relatively common practice in the publishing industry of the 19th century, the Kickstarter of its day.  Among the first subscribers to Smith’s map were the nascent Geological Society and George Bellas Greenough, first President of the Geological Society, who had started the process of creating the Society’s own geological map of the country.

In 1815, both the Society and Greenough received their copies of the map.  These were among the first copies produced.  The Society went on to order a second copy, probably in 1816.  Smith was selling large copies mounted on rollers as well as travel copies mounted on linen and folded into a folio for easy transport.  But the first copy the Society received was of the standard format of 15 separate sheets of paper.  It  was added to the collections in the Society’s library to be pored over by geologists for years to come.  The second copy the Society purchased had a different fate.  In 1828, the Council ordered that the copy ‘be varnished by Mr. Gardner and suspended in the Meeting Room of the Society’. 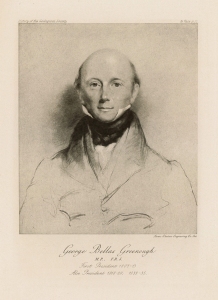 Greenough’s copy of Smith’s map was undergoing careful scrutiny.  Greenough was still hard at work creating his own geological map of England and Wales.  Unlike Smith, Greenough didn’t travel the country to make his own observations.  He had a society full of geologists who could contribute that information for him.  He also had a copy of Smith’s map full of Smith’s own observations.  One sheet of Greenough’s copy still has his handwritten notes, including the telling ‘This sheet can be of no further use to the Geol. Map, Nov 1818′.  Greenough’s map was published in 1819 with funds raised by the gentlemen of Society itself.  This was the same year that William Smith was sent to the King’s Bench debtors’ prison for unpaid debts.

The rift between the early Geological Society and Smith encompassed not only the Map, but also matters of class, money and methodology.  Some in Society argued that Smith’s method of dating strata using the fossils found within them was not particularly noteworthy nor reliable.  Smith was the son of a blacksmith and worked as an engineer and surveyor helping dig canals and construct coastal defences.  The Society’s membership predominately comprised gentlemen of independent means who enjoyed a nice dinner. Smith’s map was dedicated to Sir Joesph Banks, President of the Royal Society.  Banks had opposed the formation of the Geological Society. 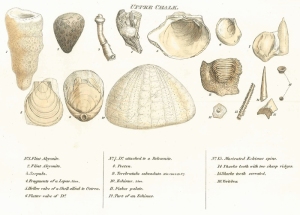 Smith’s Fossils of the Upper Chalk

Over the next decade, the fences were mended slowly, culminating in 1831 when the Society awarded William Smith the first Wollaston Medal.  Smith was named ‘the Father of English Geology’ by then President of the Society Adam Sedgwick.  Copies of both Smith’s map and Greenough’s map now hung on walls of the Society’s apartments in Somerset House, albeit in separate rooms.

When Greenough died in 1855, he left his map collection to the Society, including his copy of William Smith’s map, bringing the total number of copies owned to three.  When the Society moved to Burlington House in 1874, the maps came with it.  They were hung on different landings of the main staircase, remaining there until at least 1924 when they were all listed on an inventory of the building.  The problem with mounting a water-coloured map on wall exposed to sunlight, is that it fades over time.  By 1931, both the Smith and Greenough maps had over 100 years of sunlight exposure.  They were getting faint.  The Council resolved to replace them with fresh copies.

Initially the Library was asked to replace the framed copy with its original very early copy, now marked with pencil notes from various researchers through the years.  The Library said no.  However, one Fellow of the Society, Thomas Sheppard was both a Smith historian and a map collector. He’d been making an inventory of the Society’s map collection and had not one, but two copies of the map he was prepared to sell.  The Society bought both for 12 guineas each.  One copy was from the ‘b’ series of maps (Smith started numbering and signing the copies of his map, initially from 1-100, then a1-a100, finally b1 to presumably b100).  It had been bound in an atlas and is still in the Society’s collections.  The second copy was a later version of the map.  John Cary independently produced some copies of the map after Smith’s spell in the King’s Bench prison.  They were unnumbered and unsigned.  This second copy was one of these, probably produced in the 1830s.

Unfortunately the title sheet of this copy was slightly marked and it was thought to be unsuitable for framing and hanging.  This was resolved by swapping the title sheet of the new map with the title sheet of the library’s original copy.  The resulting map was mounted and hung on the staircase, this time with curtains to protect it from the light.  It is this map that still hangs on the wall if you come to visit the Society.  If you look carefully, you can see the title sheet in the top-right corner does not quite match the rest of the map.

At this point the Society owned five copies of the map, but over the middle decades of the 20th century two of them went missing.  By the time of the bicentenary of the Society in 2007, neither the original library copy nor the faded, varnished copy which had first hung on the wall in 1828 could be found.  There were many theories as to the circumstances of their disappearance.  At this time, the Society’s apartments were remodelled.  As part of this reconfiguration, the framed copies of Greenough’s and Smith’s maps were hung side-by-side on the bottom of the main staircase for the first time, finally together nearly 200 years after they produced.

Seven years later, archival assistant Victoria Woodcock was going through drawers of material dating back to the centenary of the Society when she found a large red leather folio with ‘Strata Smith’ written on the spine.  Inside she found a copy of Smith’s map; the original library copy that had been hidden in that drawer for several decades.  Despite being folded in two, the colours have been excellently preserved.  The Society has now conserved this copy, which is now stored safely in the Archive of the Society.  However the faded copy is still missing, presumably disposed of at some point in the 1930s.

The Geological Society has had a somewhat touchy and awkward relationship with Smith’s map over their shared history.  The map serves as a reminder of the divide that existed between Smith and the Society, and of the hardships that Smith endured during his career.  It’s also the iconic image of the story of geology in England and Wales, admired and honoured by members of the Society ever since its creation.  For many non-geologists, if the Society is known for one thing, it’s as the place you can see ‘The Map Changed the World’.

The stories of Smith’s map and of the early years of the Geological Society are entwined at beginning of geology as a modern scientific discipline.  Perhaps the mixture of reverence along with a hint of shame in the relationship is best summed up by Adam Sedgwick in his speech at the ceremony to bestow the first Wollaston medal on William Smith in 1831.

‘I would appeal to those…who form the strength and ornament of the Society, whether there was any place for doubt or hesitation? Whether we were not compelled, by every motive which the judgement can approve, and the heart can sanction, to perform this act of filial duty, before we though of the claims of any other man, and to place our first honour on the brow of The Father of English Geology…  It was he that gave the plan, and laid the foundations, and erected a portion of the solid walls, by the unassisted labour of his hands…’

‘I think it a high privilege to fill this Chair, on an occasion when we are not met coldly to deliberate on the balance of conflicting claims in which, after all, we may go wrong, and give the prize to one by the injustice to another, but to perform a sacred duty where there is no room for doubt or error, and to record an act of public gratitude, in which the judgement and the feelings are united.’

Thank you to Caroline Lam, Archivist of the Geological Society, for her help in researching this blog.