“These islands appear paradises for the whole family of Reptiles. Besides three kinds of Turtles, the Tortoise is so abundant that [a] single Ship’s company here caught 500-800 in a short time.

“The black Lava rocks on the beach are frequented by large (2-3 ft.) most disgusting, clumsy Lizards. They are as black as the porous rocks over which they crawl & seek their prey from the Sea. Somebody calls them “imps of darkness.” They assuredly well become the land they inhabit…

“It will be very interesting to find from future comparison to what district or “centre of creation” the organized beings of this archipelago must be attached.” 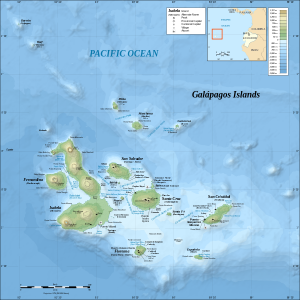 Despite Darwin’s question, there has been little research into how the Galapagos’ land locked reptiles came to be scattered across the archipelago, says University of Hong Kong Earth scientist Jason Ali.

‘No one has given it any real thought’ he told us. ‘Most effort has been focused on the legendary Darwin finches and the iconic giant tortoises.’

Now, Ali has published a study with his University of Sydney colleague Professor Jonathan Aitchison in the Journal of Biogeography, which suggests changes in relative sea level across the islands hold the answer.

‘As soon as I saw that half the islands in the Galapagos archipelago were sat on a single, shallow, submarine platform, I realized that the implications for biology could be significant’ says Ali.

‘My geology told me that sea-level falls must have regularly reconnected the islands, and that this must have profoundly shaped the land-locked biota’s distribution, and very likely its composition.’

Ali and Aitchison used palaeogeographical modelling to reconstruct the volcanic island chain for the last 700 thousand years. Their models took account of thermal subsidence, eustatic sea-level change, and associated sea-floor loading, creating a detailed picture of how the islands may have looked through geological time.

‘Our work indicates that the other reptiles – racer snakes, land iguanas, lava lizards and leaf-toed geckos – have been affected by the oscillating sea-level mechanism we have identified.’

With extreme lows in sea level, land masses which are now distinct would have been single islands, allowing, at 10,000 year intervals, long isolated reptiles to move freely between them. Only when sea levels rose were they forced back to higher ground and trapped.

Not all the reptiles responded in the same way – the study constructed various models based on different scenarios. The first of these – that a species would have been able to colonise a landmass entirely, accounts for two species of racer snakes, whilst some, such as lava lizards, lang iguanas and geckos, could only expand their ranges by limited amounts.

And what of the famous giant tortoises? ‘Curiously’ says Ali, ‘they are the only land-bound reptiles that cannot be explained by our modelling. Research indicates that their gene pools are hugely complex.’

Their more complicated genetics suggest giant tortoises were swimming or floating regularly between islands, sharing their genetic material with their neighbours.

And in recent centuries, the pattern has been muddled even further.

‘The tortoises, which were prized for their meat, were moved between islands by sailors and pirates for use as food stashes. Hence their story has an extra level of complexity.’

The research is likely to have a significant effect on how we view the Galapagos Islands and their evolution. As Ian Dunn, executive director of the Galapagos Conservation Trust, was quoted as saying in a recent Guardian blog: ‘That such a seemingly well studied archipelago can still be presenting us with new and surprising findings is a perfect example of just how extraordinary the Galapagos Islands are’.

2 thoughts on “Snakes on a chain: sea level change and evolution on the Galapagos”