We rejoin the Museum of Practical Geology in the final years of Victoria’s reign.  Still cramped, and welcoming about 200 visitors a day through its notoriously gloomy entrance hall.  Over in ‘Albertopolis’ the newer Museums are prospering.  The Natural History and Science Museums are open with far more space available.  The foundation stone for the Victoria and Albert museum was being laid.  A Select Committee of the House of Commons were already recommending that the collection move over to Exhibition Road to become more ‘conveniently situated’ 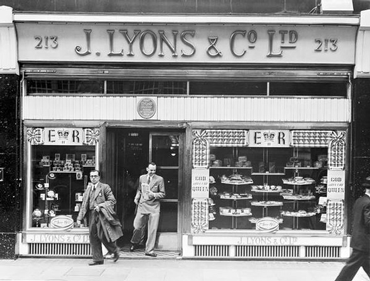 However, the next challenge to Museum would come from a more unexpected source.  Tea.  Messers Salmon & Gluckstein had struck upon the idea that what people preferred to education and betterment was a nice cup of tea.  They founded J. Lyons & Company and created the institution of the tea shop in 1894.  The very first one opened next door to the Museum at 213 Piccadilly.   The very next year, the shop was extended all the way back to Jermyn Street , so popular was it.  Indeed so very popular was it that J. Lyons approached the Government with the idea of  leasing the Museum in order to expand the tea shop even further.  They even offered to build another Museum elsewhere.

The unveiling of ‘Dippy’ at the Natural History Museum in 1905

At the same time, the Natural History Museum scored something of a coup.  Andrew Carnegie, the noted philanthropist had arranged for a cast of the Diplodocus skeleton from the Carnegie Museum to be made and transported to Britain.  ‘Dippy’ was exhibited from the 12th May 1905 in the central hall of the Natural Museum causing something of a sensation among the museum-going public and the press.  It was a raging success and went on to be an iconic image for the Natural History Museum in the century to come.  On the 54th birthday of the Museum of Practical Geology, it had been definitively eclipsed.

In this moment of opportunity amid their need for space, block-buster exhibitions, a political desire to move them closer to the other Museums, and the demand for cake, what on earth were those in charge of the Museum to do?

What they did was dither.  For 20 years.

J. Lyons & Co, fed up trying to get a decision on the Museum instead bought space just over Piccadilly Circus in what is now the Trocodero.  In 1909 they opened the multi-story Lyons Corner House, open 24 hours a day and employing 400 ‘Nippies’ in Art Deco splendour to bring you tea, cake and maybe do your hair while you were waiting.  Concurrently, the buildings in Piccadilly Circus started affixing illuminated advertising displays to their facades.  The unfashionable end of Jermyn Street was now aglow.  In the dazzle of its new neighbours, the Museum must have seemed increasingly musty and dark, but it persevered.

In the late 1920s, the attendance at the Museum of Practical Geology had dropped to fewer than 100 visitors a day.  Structural investigations led to the discovery of serious problems with the fabric of the Museum.  There were large cracks in several of the cast iron roof beams possibly caused by bombs dropped on Piccadilly during World War I.  Also the foundations had shifted.  Darn those cesspools.

There was nothing for it, they’d have to stop dithering and get a new museum built.  Finally, construction on a new site in Exhibition Road, next to the Natural History Museum, was started in 1929.  The unfortunate Museum of Practical Geology was to be abandoned at last.  But there was still a chance for it to go out in style with a last hurrah. 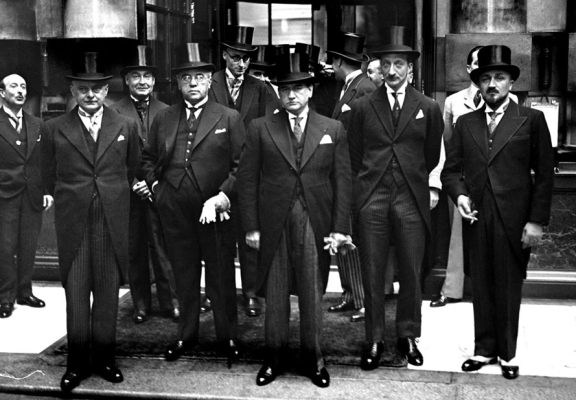 Around the world in 1933, the Great Depression was biting.  Economies were collapsing as countries struggled, coping with the Gold Standard, Dust Bowls and massive unemployment.  In this climate it was decided to hold a grand Economic Conference with all the major powers represented to settle upon a global response to calamity.  London was the venue.  A large meeting space centrally located was required.  The London Economic Conference of 1933 was opened the 12th June 1933 at the Museum of Practical Geology to great fanfare.  The hopes of the world rested on the Museum’s crumbling shoulders.  The delegates shuffled through the gloom of the entrance hall and took their places.

A week later, President Roosevelt had blown any hope of a resolution out of the water by denouncing any effort at stabilizing currencies and the German delegate had caused a scandal by announcing that the best way out of the economic crisis was to allow Germany to colonise Africa and Eastern Europe.  The delegates shuffled back out of the gloomy entrance hall and the Conference ended without agreement.   Later the same year, H.G. Wells wrote about the conference in “The Shape of Things to Come” having little but scorn for the occasion.  An inauspicious coda for a grand building.

Thus the curtain dropped on the most unlucky of ventures.  The collections were moved to the new Museum the next year which was opened in turn in 1935.  That same year, the old Museum  was demolished to make way for Simpsons of Piccadilly, the famous department store and inspiration for “Are You Being Served”.  That building still stands today and is currently occupied by Waterstone’s bookshop. The library and the Survey have moved to Keyworth in Nottinghamshire.  The Museum’s extensive and still growing collections form part of the Visions of Earth galleries in the Natural History Museum.   I hope they have enough room.