Events / Out in the field 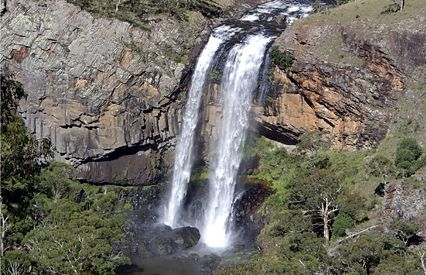 No trip to Aberdeen would be complete without incorporating Scotland’s most famous export (apart from shortbread and Andy Murray). Luckily, we had a valid geological reason too – the link between whisky and geology is well known. It’s perhaps intuitive to think there is a connection – all the marketing imagery of bubbling streams and rolling hills behind distillaries. Although much of this is exaggerated, said our guide Steve Cribb, author of ‘Whisky on the Rocks’, it’s not all PR – the geology of the local area really does have an effect on taste.

On Saturday 8th, the penultimate day of the British Science Festival, we drove out to the Glen Garioch distillery, which has been making whisky since 1797. On the way, we learned about the whisky making process and geology’s role in it – which doesn’t end when the final product is bottled. 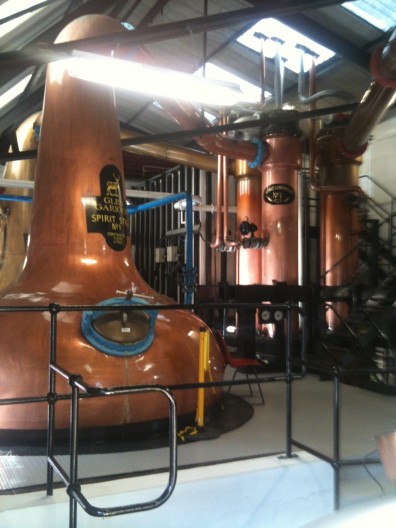 The stills at Glen Garioch, where the alcohol vapour and other complex aromatics rise up the tall necks and condense.

It’s all in the water. The gaelic translation of aquavitae – the water of life – is uisge beatha, from which we get the word ‘whisky’. Water is added to the mix after the barley has been malted and ground down into a ‘grist’. It’s needed again to prepare the spirit for sale, and often gets added to the finished product for taste.

Because so much water is needed, the presence of a large supply constrains where a distillery is located. Most are located by streams or rivers, and often deep boreholes or public water supplies have to be used. It’s the chemistry of the water which has such an effect on the final outcome, so the geological setting is important.

As Steve explains in his book, ‘Whisky on the Rocks’:

If it falls on bare mountains made of crystalline rocks it will flow rapidly downhill as streams. This water has little chance to interact with the underlying rocks and often has a low mineral content. It will be acid and soft.

On the other hand, if the strata are more permeable, or have many joints and fractures, the rain will percolate into and through the rock, dissolving it and increasing the water’s mineral content.

Whisky boffins will often tell you that the best water for making whisky is ‘soft water, through peat, over granite’. But Steve isn’t convinced there’s only one type of water that works – what does matter is making sure the water is pure.

What about adding water to taste? There’s much less research into what effect this has, but evidence Steve has gathered at various tastings suggests it matters more than you might think. Participants often noticed significant differences between whisky diluted with hard and soft water. The tastings even suggest that the water type of the area we grow up in might affect how much we like the taste of the whisky/water mix!

There are more challenges facing the whisky industry than perfecting the taste. Like all industries, it’s beginning to think carefully about how to reduce carbon emissions during the production process. With over 100 distillaries in Scotland, and Scotch whisky account for an amazing 25% of UK food and drink exports, the industry’s effect on the environment is bound to be considerable.

Aside from transport emissions, the main source of CO2 is during the fermentation phase. Yeast is added to the grist and water mix to produce alcohol. The by product, CO2, is usually vented into the atmosphere. These emissions are only about 25% of the CO2 the barley originally used to grow, but it’s still important to find new ways of disposing of it.

At Glen Garioch, a relatively small distillery, that CO2 is still vented into the atmosphere, although innovative projects like using the CO2 to produce tomatoes in greenhouses have been tested in the past. Bigger distilleries can afford to do more – a £250,00 project at Glenmorangie is aiming to recover latent heat to reuse, for example, and Bowmore distillery on Islay is supplying heat to the local swimming pool. In the end, of course, these emissions are nothing compared to the CO2 produced by staff and visitors travelling to the distillery, transporting the finished product, etc, etc..But the idea of heating a swimming pool using the by products of whisky production is still appealing.

The whisky industry is steeped in, almost defined by, its traditions. The ‘Scottish Whisky Act’ puts restrictions on every stage of the process, from what type of ingredients can be used to how long the final product can be stored, and what additives are allowed. But, as Steve’s research and projects like these show, after two hundred years there’s still a lot more to learn.

4 thoughts on “Whisky on the rocks”