One of the fastest growing areas of research in the geosciences is what is now called ‘geomicrobiology’. Although bacteria and other microbes have long been used in industrial processes such as bioleaching, where  metals are extracted from their mined ores, it is only now that the role played by microbes in geological processes is being fully appreciated. At and near Earth’s surface, such organisms can be involved in electron transfer reactions that have a great impact on the chemistry of sediments, soils and waters, influencing the cycling of major elements such as sulphur and iron, and of trace toxic elements such as arsenic. 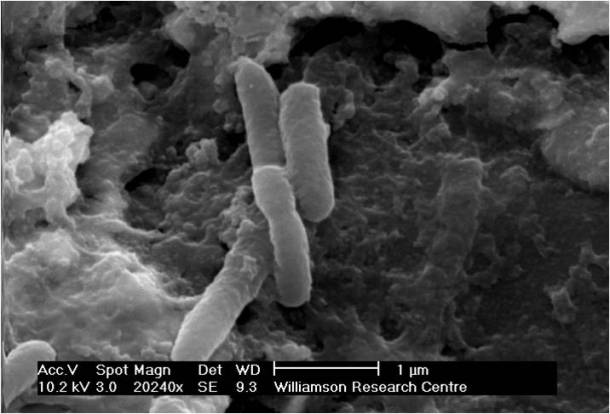 The reasons for the growth in interest in geomicrobiology is partly due to development of  techniques which can probe the composition of natural microbial communities and their genetic makeup. It is also because we now have techniques to study the very fine particle minerals, and the surfaces of those minerals, involved in many mineral-microbe interactions.

Geomicrobiology is fascinating partly because it is literally where geology and biology meet in the living world. Many questions about  mineral-microbe interactions remain to be answered, not least the question of how such interactions work at the molecular scale (as when an organism such as the bacterium Geobacter respires through an electron transfer reaction that involves the reduction of highly insoluble ferric iron oxide minerals to a much more soluble ferrous form).

Geomicrobiology is not just a subject of academic interest;  microbes can be set to work in helping to solve practical problems, such as in the clean-up of contaminated land and water, or the synthesis of novel mineral products.

As part of the initiative associated with the launch of the Geological Society’s Environment Network, the Society is co-sponsoring (with the Society for General Microbiology, and the Mineralogical Society) a 2-day conference on ‘Geomicrobiology- the roles and activities of microbes in processes of fundamental importance to geology’. This is planned for 19-20 April, 2012 in Manchester.

Look for futher information on the Society’s website and in the magazine ‘Geoscientist’ – this will be an event not to be missed!

3 thoughts on “Geology with added microbes”