Dozens of giant footprints discovered on Skye are providing rare evidence of dinosaur evolution in the Middle Jurassic epoch.

A study published today in the Scottish Journal of Geology announces the discovery of a tracksite from Rubha nam Brathairean (Brother’s Point) on the Isle of Skye, dominated by sauropod footprints.

An important time period in dinosaur evolution, dinosaur fossils from the Middle Jurassic are nonetheless frustratingly rare. Palaeontologists believe the epoch may have seen the first birds take to the skies, and the earliest tyrannosaurs and stegosaurs diversifying as long-necked sauropods began growing to colossal sizes. There are only a few locations in the world where Middle Jurassic sediments are well exposed – one of which is the Great Estuarine Group along the stunning coast of the Trotternish peninsula.

The shape and orientation of the prints’ toes, the presence of claws and the overall shape of the track outline have allowed scientists to ascribe them to sauropods and theropods. 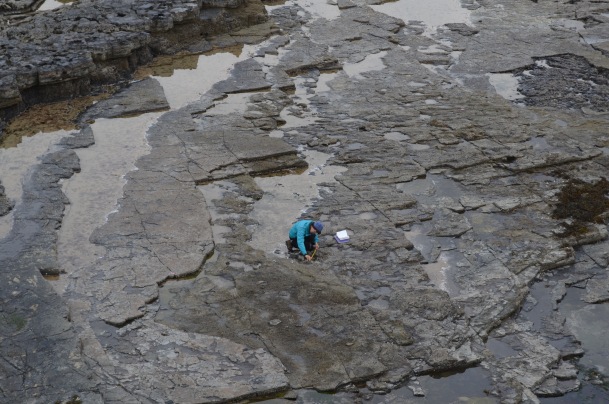 ‘This tracksite is the second discovery of sauropod footprints on Skye’ she said. ‘It was found in rocks that were slightly older than those previously found at Duntulm on the island and demonstrates the presence of sauropods in this part of the world through a longer timescale than previously known. This site is a useful building block for us to continue fleshing out a picture of what dinosaurs were like on Skye in the Middle Jurassic.’

The prints were difficult to study, thanks to the site’s tidal conditions, the impact of weathering and changes to the landscape. Researchers used drone photographs to map the site, as well as a paired set of cameras and tailored software to model the prints.

Dr Steve Brusatte of the University of Edinburgh’s School of Geosciences, who led the field team, said ‘The more we look on the Isle of Skye, the more dinosaur footprints we find. This new site records two different types of dinosaurs – long-necked cousins of Brontosaurus and sharp-toothed cousins of T. rex – hanging around a shallow lagoon, back when Scotland was much warner and dinosaurs were beginning their march to global dominance.’

The find follows the discovery of sauropod footprints on Skye announced in December 2015, described as a ‘dinosaur disco preserved in stone.’ The research was supported by a grant from the National Geographic Society, and subsidiary funding from the Association of Women Geologists, Derek and Maureen Moss, Edinburgh Zoo and Edinburgh Geological Society.