A guest blog from geologist and science communicator Haydon Mort. Find out more about Haydon’s work, and contribute to his Kickstarter campaign here.

Haydon and his son Raphael in Switzerland

There is an old pine table in Liskeard, Cornwall, to which I owe my personality. Around this old slab of wood, my family would sit to have lunch and dinner. My Dad, a social worker (and a graduate in organic chemistry) would enthuse about the latest advancements in science, and I would sit enthralled by talk of black holes, earthquakes, magnetism and artificial intelligence. At the other end of the table, closer to the piano – as if it were a refuge – sat my Mum, the listener, musician and watercolour painter who worked as a nurse at the local hospital. This table – the balance of the exact sciences, the humanities and art – is where Geologize was born.

It wasn’t until my GCSEs that my intrigue and passion for science spilt into the realm of the everyday. On one especially grey and dismal afternoon, my understated Physical Geography teacher, John McGreal, enthused about how unusual the British weather was. “Have you ever wondered why the British weather is so unpredictable?” he asked. “We have at least four air masses competing for space over our island. It’s quite rare to find that anywhere in the world!” My classmates didn’t look impressed. But for me, at least, it suddenly made that persistent cold drizzle seem somewhat unusual, inspiring and uplifting. This emotion seemed just as important as the fact which had delivered them. 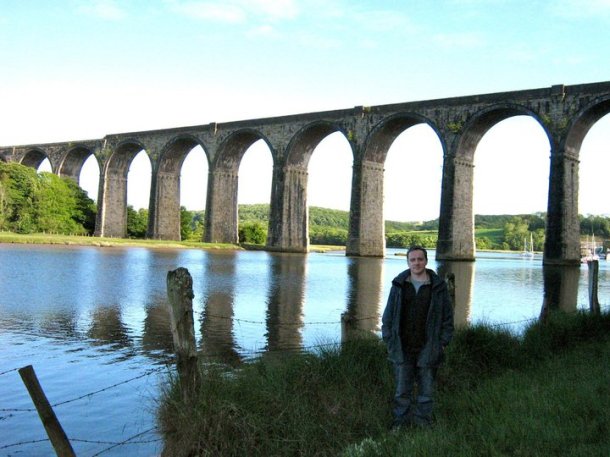 Therein rests the secret to successful communication, be it in a lecture, presentation or conversation. Emotion. Before becoming a palaeoenvironmental geochemist, I learnt to act, sing, play the piano, juggle and do magic. I use these skills, even in geology lectures, to make learning not only enjoyable but memorable. When emotion is injected, the hippocampus, which decides which information gets stored long-term, becomes activated. In other words, emotion is a vector to the long-term memory centres in our brain.

Geologize, my YouTube channel, utilises emotion to communicate the geosciences. I do this by a) making the subject relevant to the audience, b) story-telling, c) music and d) surprise. Combining all four is a skill, and like any skill, it has improved.

Relevance is subjective as people like different things. Some people love the simple life, like strolling on the beach. Others love eating sweets. There are soppy romantics and others who are obsessed with the 24 news cycle. I use these examples because I have ‘geologized’ each of them. Instead of bringing the audience to science, I bring science to them.

Our evolutionary psychology means we are hard-wired to love story-telling. Each Geologize episode is a journey, mostly in chronological order, with a distinct start, middle and end (generally with a twist). And because it’s the Earth we are talking about, the story is always an epic one.

I hang everything on the musical score and will sometimes work for days editing a video do have a crescendo coincide with a particularly profound moment. It may seem pedantic, but music is critical to generating the emotion necessary to deliver information to long-term memory centres in the brain.

A lecture to the Justice Department

I love magic tricks and when possible, try to construct my videos according to the illusionist playbook. The Pledge (showing something ordinary that people take for granted), The Turn (turning something ordinary into the extraordinary) and finally The Prestige (punch line, where everything falls into place). My videos ‘Geologizing Love’ and ’How Geology gave Donald Trump the US Presidency’ are good examples of this. In both cases, The Prestige is accompanied by a marked crescendo in the music to drive the point home.

This is my recipe, but I always strive for subjects that have the greatest relevance, and I am aware that not all my videos have titles to which everyone can relate. About six months ago, I sat down to consider subjects with which everyone on the planet could identify with, no matter how distant they may be from geology. Language and music came to mind. I figured if I could ‘geologize’ those subjects, which are universal to all human beings, I could maximise my reach, thereby bringing the geosciences to more people. I now have plans to make both videos, but for this blog, I will focus on language.

When I set about researching language and decided to focus on my own language, English, I remembered Melvyn Bragg’s ‘Adventures of the English Language’. New words needed to be created as humans spread across territories and encountered new natural phenomena. This seemed too obvious and not enough for a Geologize video. Jared Diamond’s Collapse also sprung to mind, but it deals with the rise and fall of civilizations due to man’s relationship with ecosystems, not the spread and content of language per se. I wanted to know if Earth History could have caused events that fed the English Language. It turns out; it can!

For example, Shakespeare. We know precious little about him, save his genius profoundly changed the way we speak English and other languages. How could I possibly geologize him? By asking the one question kids love to ask; ‘Why’. ‘Why’ gives us a causality time machine and an infinite regress leading all the way back to the Big Bang. But we needn’t go back that far. We simply hope off when we see some rocks forming in the geological past. So let’s do Shakespeare.

During my research, I stumbled upon the poem that first brought Shakespeare to public notice, Venus and Adonis. Like many of his writings, it was inspired by ancient Greek legend, and in this case, he borrowed from the mythological references in the Greek play, Aphrodite and Adonis. In the fable, the Goddess Aphrodite, in a fit of jealousy, turned the beautiful Myrrha into a myrrh tree.

Myrrh trees are native to the Arabian Peninsula, doing best in thin limestone soils. The sap from the trees produces the myrrh resin that had various ceremonial purposes, mostly sacrificial. It is mentioned in several Greek myths and repeatedly appears in various ancient texts, including the Old and New Testaments of the Bible.

It is certain that without the thin soil and limestone substrate that the Myrrh tree requires, a wide variety of myths and events would not have been told in the way they were. And without his Greek inspiration, Shakespeare may not have got his lucky break with his poem Venus and Adonis.

The ‘discovery’ of Shakespeare by his peers propelled him to stardom and let his creativity with the English language percolate through society. His use of similes, metaphor, personification and other tools, as well as the new vocabulary he introduced, changed English forever – and has even been borrowed by other world languages. Who would have thought that such a massive contribution would have been predicated on an abundance of limestone?

Shakespeare. Geologized! I do not want to give out any more spoilers for this particular Geologize project, but I think this example shows how our vocabulary and expressions could have easily been very different if it weren’t for certain geological coincidences. We know how essential vocabulary is in raising consciousness, emotional intelligence as well as our capacity to experience, feel and communicate sentiment. But from a geological standpoint, these possibilities were sown millions of years ago. 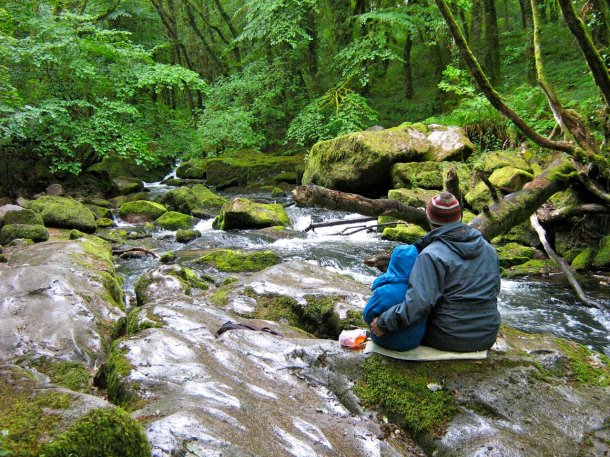 Haydon and his son Ethan

It is a dizzying but inescapable conclusion that some may reject purely out of aesthetics; like Keates’ critique of Newton when he ‘unwove the rainbow’ using prisms and mathematics. Personally, I find it genuinely uplifting to fully appreciate how society is so intimately embedded into the fabric of Planet Earth. I hope that when people fully absorb how much our world has influenced them, they will shift their behaviour accordingly, by behaving more sustainably towards the planet and in a less judgmental way towards societies with different linguistic heritages. Even if people radically disagree with me, at least they have been engaged with the geosciences, and I have been able to impart some knowledge regarding, for example, the Paleozoic tectonostratigraphic framework of the Arabian Peninsula – which includes the limestone upon which the Myrrh tree grows.

As the reader will see, this is a massive project. Starting in the ancient Celtic (Brittonic) languages, moving through the Romans, Anglo-Saxons, Normans, the Bible, Shakespeare, Colonisation, each period being researched, geologized, scripted, produced, presented, edited and set to music. Geologize is a one-man band – me – and I don’t have time. This is why for this project I turned to crowdfunding using the America site, Kickstarter. I have until midnight, 13th February to raise £8,000 in pledges. One pound less than this will result in no money being collected. Anyone interested in pledging, please do so here, where you can see a promotional video I produced for Kickstarter.

I have been delighted by the response to this project. Several fellow geologists have stood up to support me. The Geological Society has offered me this platform. After watching the promo video, non-geologists have become enthralled by the possibilities. Prof. Iain Stewart, of Plymouth University and BBC geologist presenter, has offered his valuable help. Perhaps my most significant endorsement came from the editor of the Journal of English Linguistics, Prof. Alexandra D’Arcy, who confirmed that my proposal opens up an entirely new avenue of research. Linguists have tackled the natural world only within the context of historical linguistics and not directly with the underlying Earth story.

Regardless of what happens to this Kickstarter project, I’ll be content because a new dialogue has started between the exact sciences and the humanities. These are two areas which historically have had an uneasy relationship. However, they define who I am! 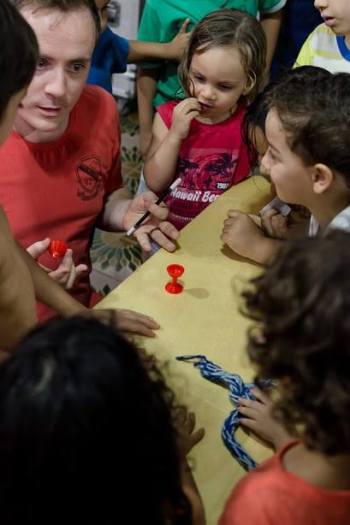 As for other future episodes, look out for ‘Music and Milankovitch’, ‘Smartphones and Mountain Building’, ‘Geologizing the Human Body’ and ‘Researching Mars on Your Local Beach’. Without an academic affiliation, I’ll be financing these through branded content and other sponsorship schemes. Those interested in collaborating, please feel free to contact me at haydon@geologize.org.

In closing, you may be interested to know that this very blog post is approximately 400 million years in the making. It was then that the shallow seas off the coast of Laurasia formed organic-rich muds which were later to become the enormous US shale-gas reserves. These formations made the United States energy independent, created a surplus of oil, driving down global prices and made Brazil’s ultra-deep pre-salt reservoirs uneconomical. With a subsequently very red balance sheet, Brazil’s federal government slashed their R&D budget, a process for which I am a casualty. It is because of this Devonian-derived misfortune that I am writing this blog; now having time to focus on that which I love most: Science communication.