The UK’s geology is famous around the world because of the sheer diversity and complexity of the rocks exposed on our little island (or archipelago, to be exact!) What is not always obvious though is the enormous diversity in environments and climates that the UK landmass has experienced since the dawn of geological time (a whopping 4.5 billion years ago). Evidence of these extremely different environments can be found everywhere under our feet – and by exploring a relatively small area at various different time periods, the huge variation can be seen even more clearly.

In a mini series for the geoadvent, we’re going to follow William Smith around some of the geology of Wales on his famous, namesake map, to explore how the Wales we see today has evolved through geological time. Why Wales? Though a small country, it has experienced huge changes in environment over time, so is a perfect way to demonstrate the scale of these variations.

So, where are we going first?

The Anglesey section of William Smith’s map. Can you spot William Smith hiding in the map? The orange shading refers to an outcrop of ‘granit, sientite and gneiss’.

First up we are going to visit the ancient rocks of Anglesey, a small island off the North coast of Wales. Imagine, if you can, England and Wales as active volcanic islands sitting at the edge of a vast ocean along the northern margin of a supercontinent called Gondwana, and you start to picture the early history of Anglesey (over 650 million years ago). William Smith would be sitting either on the slope of an ancient volcano or on the sea floor surrounding these islands. Not only that, but he would be sitting in the southern hemisphere! To the North-West, he would be looking out across a vast ocean stretching across almost the entire northern hemisphere

But how do we know this? The clues are in the rocks we can find in Anglesey today. We know that this part of Wales was once volcanically active because of the presence of igneous rocks such as gneisses and granites found on Anglesey which were formed over 650 million years ago. Some time later, these volcanic islands collided with Avalonia, a small-sub-continent at the edge of Gondwana. This caused the oceanic plate that the volcanoes were sat on to subduct beneath the continental plate of Avalonia, taking the ocean sediments and rocks with it! Any rocks that couldn’t be subducted were scraped off and forced onto the Avalonian landmass. Among the sediments forced up through the power of the colliding plates were pillow lavas. These are pillow-shaped rocks which form on the seabed when lava erupts underwater. During subduction, these rocks were scraped up onto the land, where we see them today on Anglesey.

The presence of pillow lavas is just one of the ways we know that subduction has occurred in this area. We can confirm this from the presence of blueschists on Anglesey. Blueschist is a metamorphic rock that forms when sediments are subjected to low temperatures (200 to 500 degrees celsius – ok, not that cool, but cooler than some metamorphism!) but unusually high pressures (4 to 12 kbar) such as those found in a subduction zone.

These rocks were later pushed up onto land where we see them now. This gives you some idea of the forces at play when plates collide.

But the action isn’t over yet….

Wales was part of Gondwana until 480 million years ago when it broke away on the sub-continent of Avalonia and started its long journey towards the tropics. It crashed into Scotland on the ancient continent of Laurentia 70-80 million years later. During the early Paleozoic period (542 to 251 million years ago), Wales was affected by the Caledonian Orogeny (490 to 390 million years ago), a mountain building event that saw Gondwana and several mini-continents (including Avalonia where Wales was located!) that had broken off from Gondwana collide with Laurentia, a continent to the North -West which was made up of ancient North America and Scotland, by converging plate movement. This closed the ancient Iapetus Ocean that existed between Scotland and Wales and England through the formation of subduction zones, one to the north beneath Scotland and one to the south beneath Anglesey and North Wales. It was this final collision that fused England and Wales with Scotland, and it has remained that way ever since. 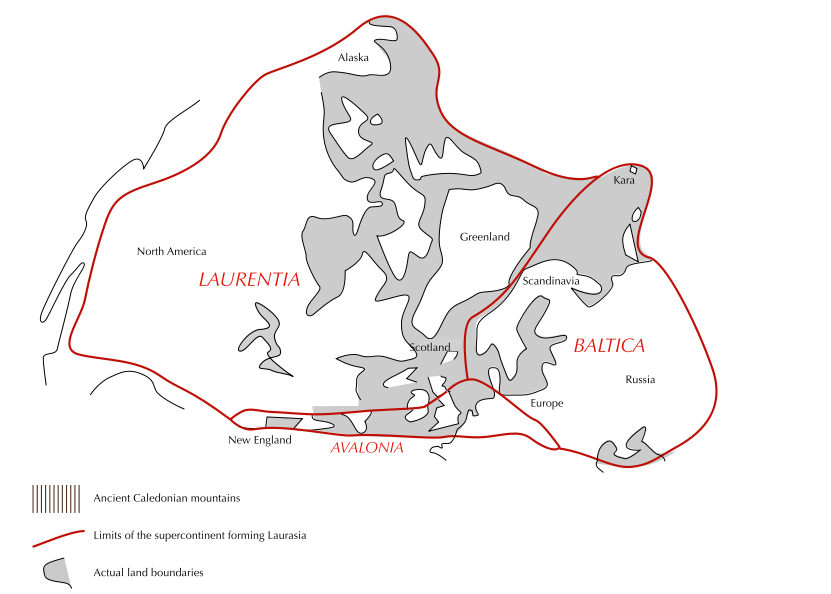 Map showing the limits of the Avalonian and Laurentian continents and modern coastlines and land borders. Image courtesy of Wikimedia Commons.

This enormous squeezing and shoving of ancient rocks and sediments up onto land in Anglesey left a very confused and deformed picture for geologists to unpick! After this destructive period, Anglesey is now sitting on a newly formed continent and is drfting towards the equator. We’ll pick up the geological history of Wales next time…