The epitaphs at the base of the headstones in any Commonwealth War Graves Commission (CWGC) cemetery serve as moving reminders of those who lost their lives during the two World Wars and as witness to the grief and loss of those who knew and loved them.

The headstones themselves also have a story to tell. The rocks used to create these memorials, which are largely made of Portland Stone, an oolitic limestone deposited in warm shallow seas around 145 million years ago during the Upper Jurassic, reveal a wealth of  geological features.

The CWGC Cemetery at Botley, Oxford provides an excellent example of the care and attention the CWGC paid to honour those who gave their lives during the first and second world wars. The architectural features of the Botley CWGC plot were designed by Edward Maufe, ARA, and the cemetery features splendid examples of both a Lutyens Stone of Remembrance and a Blomfield Sword of Sacrifice.

Many of the 156 WWI burials at Botley are of casualties who were treated at the 3rd Southern General Hospital (an Oxfordshire Territorial Unit) which was housed in the Examination Schools and a number of other buildings in Oxford. During WWII Botley was designated a Royal Air Force regional cemetery and was used by RAF stations in Berkshire and neighbouring counties, and includes the graves of 516 Commonwealth dead. Information and about those buried at Botley, as well as a map showing the location of individual graves, is available in a Rotunda at the cemetery entrance, making it easy for visitors – many of whom travel from as far away as Australia and New Zealand – to locate the graves of their relatives and friends.  The cemetery also includes sections for the graves of non-Commonwealth combatants. 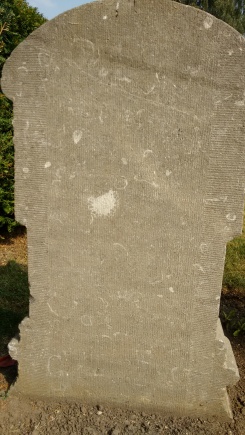 For geologists, the expanse of stone exposed on the headstones and on the Lutyens and Blomfield memorials offers an excellent opportunity to examine a range of facies and geological features in Portland Stone. In addition, some of the graves of the non-Commonwealth dead are marked by headstones made of rocks from their ‘home countries’, including a lovely crinoidal limestone with corals from Belgium.

To highlight the history – both human and geological – behind the Botley war graves historian and archivist Sarah Wearne, author of Epitaphs of the Great War: The Somme, and geologists Nina Morgan and Philip Powell, authors of The Geology of Oxford Gravestones, are teaming up to lead a guided walk to explore the epitaphs and geology of the headstones in the Botley Commonwealth War Graves Cemetery.

The walk is free to attend. All welcome and no need to book.

Bring a hand lens and be prepared to be both moved and amazed by the history and geology of these memorials in a peaceful cemetery setting.

*Nina Morgan is a geologist and science writer based near Oxford. She writes the Distant Thunder column in Geoscientist, and is co-author with Philip Powell of The Geology of Oxford Gravestones . For information about the book see: www.gravestonegeology.uk

One thought on “War stories behind the stones”

The Geological Society is made up of over 12,000 geologists from over 80 countries worldwide. Shared views, differing opinions, debate, discussion and dialogue. Join now and get involved in shaping the future of Earth science
This large lithographic plate, which we have digitally stitched together, is from ‘The Mastodon giganteus of North America’ by J.C. Warren (1852). The other images show the title page of the book and a plate with examples of complete Mastodon skeletons which had been found.
If you are feeling that the Geological Society isn’t for you, maybe think again. If you study, work or are interested in any of the elements of Earth science, then we have something to offer you. Come and take a look.
Check out our brand new #YearOfSpace posters!
A paper published this week reports on 18 new Theropod and Sauropod footprints in the Bemaraha Formation, Madagascar, forming an important record from the Middle Jurassic strata.
Do you work in Earth sciences? Join the Geological Society to progress your career at every level whether a student or an experienced geologist