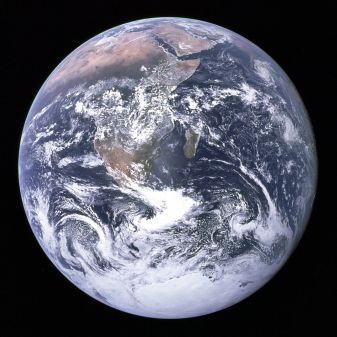 The “Blue Marble” photograph of Earth, taken during the Apollo 17 lunar mission in 1972 (Wikipedia)

While the rest of us are working on making, breaking and conveniently overlooking newly made resolutions, some in the geological community are focusing on a more fundamental resolution. It’s a subject which has been under discussion for several years, and the topic of countless meetings, articles and debates.

Now, the Anthropocene Working Group has started the year by publishing a report  on the question which has been splitting the geological community – has the human race, by our own agency, established a new geological time period? Their answer – though not the final word – is a resounding yes.

The working group – 37 members with expertise ranging from geology to international law – state that ‘the Anthropocene is functionally and stratigraphically distinct from the Holocene’, in a report published by Science Magazine today. 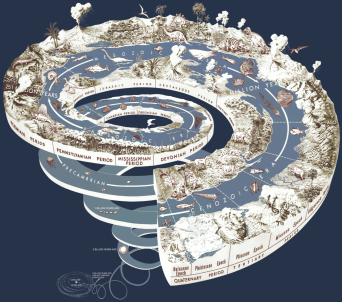 Graphical representation of Earth’s history as a spiral (Wikipedia)

The evidence ranges from changing geochemical signals, traces of nuclear fallout, rising extinction rates, and global dissemination of materials like plastics and concrete, which they call ‘technofossils.’

All of these are enough, the group says, to produce a stratigraphic signature in sediments and ice which distinguishes our time from the Holocene – an epoch that began 11,700 years ago. And if that is the case, we’ve written a new epoch into the geological timeline – the first boundary to be decided as we witness it.

In October 2015, as part of Earth Science Week, the Anthropocene Working Group’s convener, Jan Zalasiewicz of Leicester University, led a day of discussion with a group of GCSE and Sixth Form students at the Geological Society. He was joined by Alex Stanish, a lecturer in Geology Education at University College London, who argued that the Anthropocene should not be established – and the students told us what they thought. 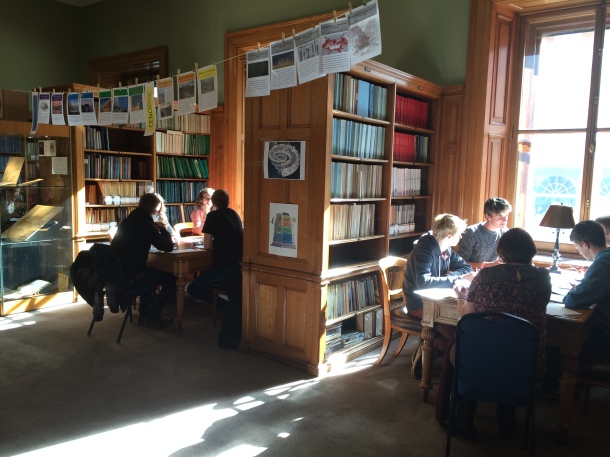 Most were sceptical. ‘It seems to early for us to be sure’, was the resounding view. Several thought that the Anthropocene is too human-centric – perhaps we’re overestimating our place in our planet’s long history?

But some were convinced by Professor Zalasiewicz’s evidence in favour of the new time period. From plastics embedded in rocks to the effect of widespread fertilizer use on strata and ice cores, it’s hard to argue we haven’t caused a fundamental change to the Earth which will be visible to future geologists. It was the official classification which seemed to give most of the students pause – why decide now, when we can continue to gather evidence?

Iron and Coal, 1855–60, by William Bell Scott – did the Anthropocene Epoch start with the Industrial Revolution? (Wikipedia)

The debate is by no means over – now that the interim report has been published, the Working Group will produce recommendations. It is the task of the International Commission on Stratigraphy to decide whether the Anthropocene epoch will become an official time period, or will remain an informal unit.

Meanwhile, the Working Group continues to debate not only the existence of the Anthropocene, but when its start date might have been. Is it the beginning of agriculture and deforestation by humans, the 19th century Industrial Revolution, or the huge population growth and industrialisation of the mid 20th century?

So, as 2016 gets underway, it looks like we won’t know for a while longer whether can wish you a happy new epoch – but we’d love to know what you think! 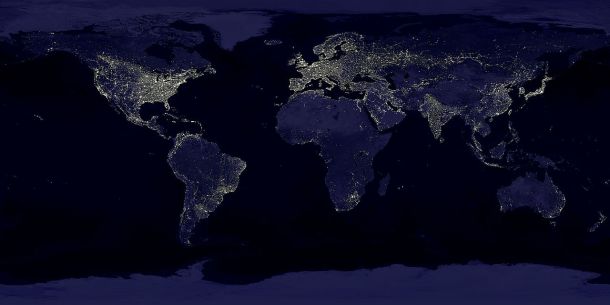 The Earth at night, a composited night-time image of the world during the ‘Anthropocene’ (Wikipedia)

One thought on “New Year, New…Epoch?”