A new study suggests the lock of William Smith’s hair, one of the Geological Society’s treasures, may not be what it seems.

The hair, preserved in the frame of Smith’s portrait in the Society’s entrance hall, was sent for chemical analysis, ahead of the 2015 celebrations for the bicentenary of Smith’s famous geological map of England and Wales.

Smith published the map, the first geological map of a complete country, in 1815, and has since become known as ‘The Father of English Geology’. 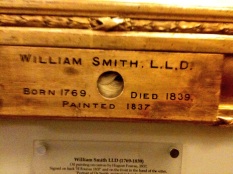 The famous lock of hair, beneath Smith’s portrait.

Dr Avril Foley of the University of Limerick, who performed the study, said ‘chemical analysis of the supposed hair of the great William Smith reveals high potassium concentration, suggesting that it is in fact the hair of a badger, cut from a shaving brush.

‘Shaving soap is high in potassium, because unlike normal soap, sodium stearate, it contains potassium stearate.’

Some time in the nineteenth century, when the portrait was reframed, it is thought the framer may have lost the original hair, and replaced it with his shaving brush, in an effort to evade detection.

Other theories implicate the Geological Society’s own library, which uses similar shaving brushes to dust its books. Former librarian Dr Vileda Mophead was dismissed from her post in the mid 1950s when several items in the Society’s archive were found to have been sold to private collectors, in order to finance an out of control pineapple habit.

One thought on “Smith relic debunked”

Are you considering joining the Geological Society? We need your support now more than ever before.
As part of our education activities for the #YearOfSpace, we were delighted to be able to provide around 400 families with space science goody bags over half term!
Why become a member of the Geological Society? There are many benefits including networking, career progression, events, conferences, mentoring, access to research and much more.
Are you 16-18, studying A levels or Advanced Highers? Enter now to win funding for your school! In our Schools Geology Challenge students can showcase their interest in geology, learn more about the way geoscience impacts our lives, and put their teamwork and presentation skills to the test. Closing date for entries: 4th February 2022.
Do you have a passion for Earth sciences? As a member of the Geological Society, we will support your advocacy work to raise awareness of the profession.
Join us as a Fellow today and take advantage of mentoring opportunities. If you are looking to become a Chartered Geologist, you can benefit from the knowledge and guidance of our more experienced Fellows.