The Government’s Chief Scientific Adviser, Professor Sir John Beddington CMG FRS, opened the headquarters of the British Geological Survey in Keyworth, after its £25m makeover.  Formerly named for former Director Sir Kingsley Dunham, the Nottinghamshire campus has been renamed the BGS ‘Environmental Science Centre’.  The redevelopment, all funded from the public purse by NERC, has taken almost a decade.

John Ludden, Director, BGS, welcomes the assembled to the unveiling

John Ludden, the Director who has overseen the redevelopment, said: “BGS enters a new era with the opening of its renovated site.  It will develop an innovation centre and will build further partnerships with industry and research institutions, focusing on the energy and environmental challenges of the future.”  Duncan Wingham, the new Chief Executive of NERC, then welcomed Sir John Beddington, who unveiled the plaque of dedication and congratulated BGS on managing the redevelopment with the ‘panache and style’.

BGS has been based at the Nicker Hill site, Keyworth, since being ‘decentralised’ as part of the mid 1970s’ enthusiasm for relocating government agencies out of London.  BGS headquarters were finally transferred ten years later.  The rather remote site had formerly been a catholic teacher training college, and required considerable adaptation during its first 35 years to suit the needs of a research organisation.  The latest massive cash investment has however been by far its greatest phase.

The first new building to be opened – by the Princess Royal in 2009 – was the William Smith Building, now home to 200 scientists and support staff.  Centrepiece of the completed site is the James Hutton Building, housing a further 100 scientists and support staff and also featuring top of the range environmental features (both are A-rated for energy performance).  Its entrance is graced by a huge stylised representation of Hutton’s famous unconformity at Siccar Point, fashioned from rocks of the correct age equivalence to those that inspired Hutton.

The campus also features an ‘Innovation Hub’ for co-located companies, including BGS International, which was spun off into the private sector earlier during recent reorganisation.  Another company now sharing the Innovation Centre is PANalytical, who were also represented at the grand opening, and  Ludden hopes that more companies – chiefly, though not necessarily exclusively, environmental in their missions – will be attracted to the site in much the same way as has been seen at the NERC site in Daresbury Innovation Centre, Cheshire. 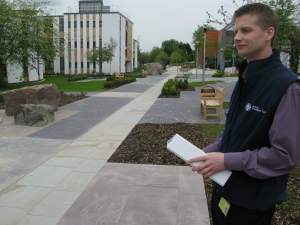 The Geological Walkway, which aims to display the UK’s uniquely varied lithological heritage, is a 130 metre-long concourse, each step along which brings you roughly 25 million years closer to the present (cunningly represented by some glacial till paving, and a homage to Stonehenge with an upright sarsen and recumbent bluestone from Preseli).  Along the way, natural stone paving is divided into geological periods by stainless steel strips, and each rock type badged with a numbered disc referring the visitor to an accompanying leaflet.

Steve Parry of BGS, who managed the design and sourcing process, explains that, in addition to the paving stones (which are in strict stratigraphic sequence – though not ‘to scale’, since such walk would have been nearly all Precambrian!) a number of monoliths line the route, in ‘broadly’ correct sequence.  Departures from stratigraphic order were only made for the best design reasons, he says; though he admits not all rocks are equally suitable:  “Geology” he says wisely, “doesn’t always give you what you want”.  The walk is open to the public every weekday during office hours.  And, as befits a British tourist attraction, it actually looks better when it’s wet.

The sequence begins outside the reconfigured main reception in the Sir Kingsley Dunham Building.  Four huge monoliths leave the visitor in no doubt about what goes on within.  Pride of place goes to a 15-tonne boulder of Lewisian gneiss from the Outer Hebrides.  Cretaceous Chalk from Northern Ireland, Coedana Granite from Anglesey, Charnian volcaniclastics from nearby Charnwood Forest  and Bardon Breccia, also from the Charnian Supergroup (Leicestershire), stand for the other parts of the UK.

The grand opening, attended by a wide range of people including BGS stakeholders, contractors, staff, friends and neighbours, also included a display of BGS’s 3D visualisation facility, dramatically demonstrating the digital database that is now the BGS’s main output, and a tour of the National Geological Repository.  The newly extended and renamed former core store became the centre of some controversy last year when some user groups expressed alarmed at the proposal, now being implemented, to transfer to Keyworth the UK offshore cores previously housed in Gilmerton, Edinburgh.

The National Geological Repository, BGS Environmental Science Centre, Keyworth – soon to be home to over 400km of core from the UK offshore.

Ludden believes that the fears expressed for the integrity of the more delicate cores during transit have been fully allayed, after the ‘before and after’ digital photographs that have revealed practically no significant changes, and which themselves are proving such a valuable and popular resource.  The move is expected to be completed later this year, by which time the Repository will contain approximately 400km of core in ‘world class conditions’ (including being warmed by waste heat from the NERC computer hub) with room to spare.

Visitors with a sense of history will be pleased too to see the Farnese Hercules, cleaned and occupying pride of place along the way to the geological walkway.  Carved for the Great Exhibition to demonstrate the excellent properties of Portland freestone, the statue was famously emasculated by Director Sir Archibald Geikie in order to spare Lady Geikie’s blushes when she visited the Survey.  The expense of the delicate operation was such that a Parliamentary question was asked at the Committee of Public Accounts, and Geikie was summoned to account for his action. 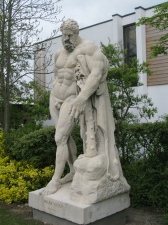 Herc’s tackle was thereafter kept in a silk-lined box, handed down from Director to Director as the unofficial orbs and sceptre of office.  This was opened once a year and passed around the table at GS annual staff dinners.  On removal to Keyworth however the offending member was restored to its wistful owner, and recent cleaning has had the interesting effect of revealing the join.

Rumours that in return for their funding, BGS’s parent Research Council had insisted on renaming the hero “Nercules” are however entirely without foundation.